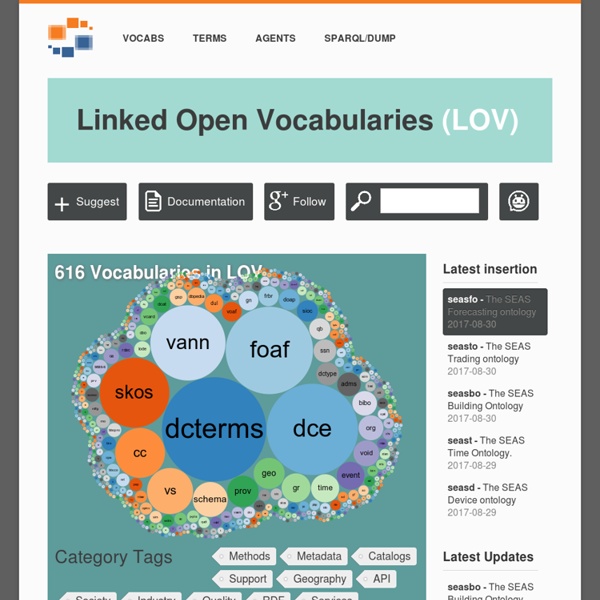 Seeing Standards Poster of visualization (PDF, 36in x 108in) Metadata standard glossary, poster form (PDF, 36in x 41in) Metadata standard glossary, pamphlet form (PDF) The sheer number of metadata standards in the cultural heritage sector is overwhelming, and their inter-relationships further complicate the situation. This visual map of the metadata landscape is intended to assist planners with the selection and implementation of metadata standards. Each of the 105 standards listed here is evaluated on its strength of application to defined categories in each of four axes: community, domain, function, and purpose. The strength of a standard in a given category is determined by a mixture of its adoption in that category, its design intent, and its overall appropriateness for use in that category.

Spiritual Warfare Scriptures « Spiritual Warfare For a complete Bible study, please see Spiritual Warfare and additional topical scriptures on each page of the Spiritual Warfare Chart. The following Bible verses serve as a quick reference guide to biblical spiritual warfare. The spiritual power of Bible Scriptures For the word of God is living and powerful, and sharper than any two-edged sword, piercing even to the division of soul and spirit, and of joints and marrow, and is a discerner of the thoughts and intents of the heart. And there is no creature hidden from His sight, but all things are naked and open to the eyes of Him to whom we must give account.

Tools - Semantic Web Standards Overview This Wiki contains a collection of tool references that can help in developing Semantic Web applications. These include complete development environments, editors, libraries or modules for various programming languages, specialized browsers, etc. The goal is to list such tools and not Semantic Web applications in general (the interested reader may consider looking at the W3C SW Use Case Collection for those.) The tool content of this wiki is still to be maintained by the community and not by the W3C staff.

» Linked Data for the Uninitiated (Part 1) This two-part post is my follow-up to LAWDI 2012, officially known as the first Linked Ancient World Data Institute. It brought together a multi-disciplinary group of digital scholars at NYU’s Institute for the Study of the Ancient World (ISAW) whose interests incorporate the Ancient Medierranean and Near East. This essay is cross-posted on the GC Digital Fellows blog.

greasemonkey: authoring Mark Pilgrim has given the Greasemonkey community Dive into Greasemonkey, the best reference imaginable. The stuff below might be slightly more up-to-date. You can write your very own shiny user script with just a few steps: 1. Create the file Open a new text file in your favorite editor and throw some javascript in there. Flint SPARQL Editor Demo Welcome to Flint, our editor for SPARQL queries. Features Flint 1.0 is now available.

Data What is Linked Data? The Semantic Web is a Web of Data — of dates and titles and part numbers and chemical properties and any other data one might conceive of. The collection of Semantic Web technologies (RDF, OWL, SKOS, SPARQL, etc.) provides an environment where application can query that data, draw inferences using vocabularies, etc. However, to make the Web of Data a reality, it is important to have the huge amount of data on the Web available in a standard format, reachable and manageable by Semantic Web tools. Furthermore, not only does the Semantic Web need access to data, but relationships among data should be made available, too, to create a Web of Data (as opposed to a sheer collection of datasets). This collection of interrelated datasets on the Web can also be referred to as Linked Data.

How to add semantic data to your WordPress site in 20 minutes or less - my talk at WordSesh 2013 A bit over a week ago I was invited to speak at the second WordSesh online conference. WordSesh is a full day of live WordPress presentations from all over the world. The presentations were live-streamed via Google Hangouts, and you can see my presentation and the video at the end of this post. I spoke about how WordPress site owners and developers can easily add semantic data to their websites. What is semantic data? List of file formats This is a list of file formats used by computers, organized by type. Filename extensions are usually noted in parentheses if they differ from the format name or abbreviation. Many operating systems do not limit filenames to a single extension shorter than 4 characters, as was common with some operating systems that supported the FAT file system. Examples of operating systems that do not impose this limit include Unix-like systems.

How Can You Join the DNC Class Action Lawsuit? Bernie Sanders supporters are being asked to join a class action lawsuit against the DNC. (Getty) With news about the WikiLeaks dump showing the Democratic National Committee working to push Hillary Clinton’s nomination rather than remaining neutral, there may be more evidence than ever for a class action lawsuit that has been filed against the Democratic National Committee. Comparison of file synchronization software This is a list of file synchronization software. File synchronization is a process of ensuring that files in two or more locations are updated via certain rules. Definitions[edit] The following definitions clarify the purpose of columns used in the tables that follow.