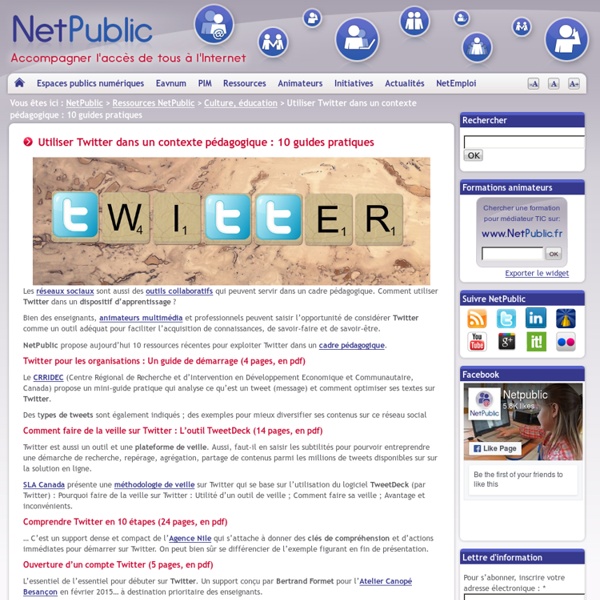 Beginner's Guide to Pinterest for teachers (the crib sheet) Published on February 15th, 2016 | by Mark Anderson Following on from yesterday’s popular crib sheet for Twitter, I thought I’d do one for Pinterest too. I’ve been a big fan of Pinterest in education for a long time now as discussed for example in this post from 2013. 10 Social Media Skills for Every Modern Teacher [Infographic] Social media skills have an increasingly useful presence in modern classrooms. Teachers and students alike use them to connect and to expand learning. Social media doesn’t have to be a distraction. It can be a powerful learning tool if used properly.

Twitter in Education – Barriers and possible solutions? After a wry commentary on the ‘10 Stages of Twitter‘ many educators have commented on the barriers that exist to twitter use. As a proposed channel of communication for iPad use in school, it is important to investigate these barriers and address them for staff. ACCESS – It is all very well popping onto twitter if you have a smartphone that allows you access with one tap of an icon. It is a very different experience if you are logging in via the website just to scroll through a timeline you don’t engage withUNDERSTANDING – Twitter fans have countless tales to tell about colleagues who ‘don’t get twitter’. It is a difficult medium to explain sometimes, even though its simplicity is its strength. A virtual chat with people you have never met is alien to some, particularly those who use Facebook as a measuring tool.

Plane developments of geometric bodies (1): Nets of prisms A right prism is a polyhedron that has two congruents pararel polygonal faces (bases of the prism) and with all remaining faces are rectangles. The main interest of this page is to see how a right prism can be developed into a plane net. There is a platonic solid that is a prism, the cube. This is a cube net:

10 Tips for Teachers Using Twitter Today, I began teaching my course “Engaging Today’s Learners with Technology” at Stanford’s Festival of Teaching. One of the first things I asked my students to do was create a Twitter account. I explained that Twitter is ideal for connecting with other educators, engaging in conversations about education, and being inspired by the steady stream of interesting ideas shared online. During our session, we crowdsourced tips for using Twitter. I thought I’d share some of the tips I’ve learned in the last 5 years on Twitter.

So you have a Twitter account. Now what? Listen to an extended version of this post as a podcast: Podcast: Play in new window | Download (Duration: 20:14 — 28.1MB) I hear it all the time: “I have a Twitter account, but I don’t really know how to use it.” How to Twitter Chat Spencer E Holtaway via Compfight *This was originally posted on Aug. 13, 2013. Updates were made on April 26, 2016. If you’re getting ready to participate in a Twitter chat for the first time, this little post may be helpful to you.

The 15 best educational Twitter hashtags - Learn Egg Digital Skills Social Media The 15 best educational Twitter hashtags When it comes to learning through your Personal Learning Network (PLN), the very first app or web tool mentioned is typically Twitter. That’s because it’s a never-ending stream of useful information, resources, and news curated by you. In other words, Twitter is what you make it. Want it to be a supercharged learning network on steroids?

Teacher Recommended: 50 Favorite Classroom Apps Educators and students are quickly becoming more comfortable with classroom technology, allowing them to shift from thinking about the technical side of integrating a new tool to focusing on how it improves learning. While the sheer number of education apps is still overwhelming, increasingly teachers have found what works for them and are sticking to them. “The conversations I had were radically different than they were a year ago,” said Michelle Luhtala, the librarian for New Canaan High School and host of an Emerging Tech webinar on edWeb. She tapped her professional learning network of educators, teaching all grades and located all over the country, to share their favorite tech tools. Change Your Twitter Handle You set up your Twitter account without really understanding how Twitter works. Now that you are using Twitter to connect professionally with other educators you may be wishing you had chosen your Twitter handle differently. Perhaps you have changed your name and need your Twitter handle to reflect your new last name.

A Mindful Educator's Guide To Twitter Twitter currently has approximately 313 million monthly active users, according to data from 2014 published by Edsurge. Out of the 1/2 billion tweets that post every day, 4.2 million are related to education, While there is no hard data, my own experience on Twitter over the last 5 years is that educators who Tweet, especially those who participate in "Edchats," tend to be progressive thought leaders who have grown the educational Twitter base in their own schools, districts, and communities.​ Twitter Edchats are weekly organized discussions of educators and people interested in a broad range of educational topics that meet virtually from around the world and across all time zones. For educator's, or anyone who wants to communicate with them, the two most important things are "community" and "discussion" Tweeting is a give and take conversation going on asynchronously 24/7 and sometimes synchronously (Edchats) under a specific hashtag, i.e.