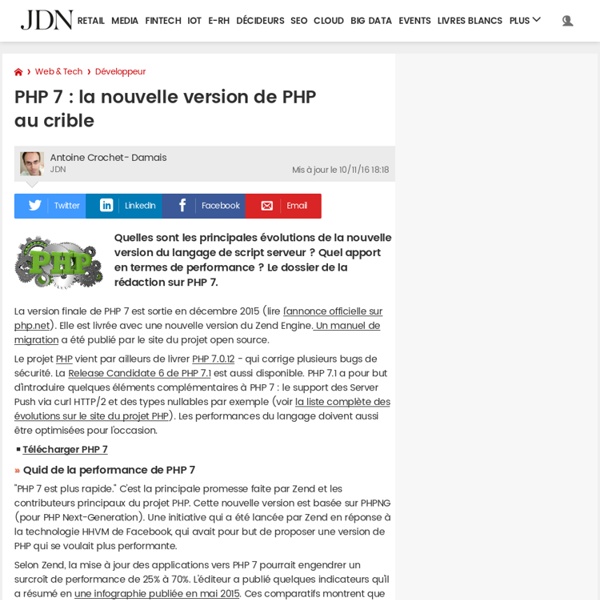 The Evolution Of PHP PHP is considered amongst the most used and most popular scripting language used on the web. PHP stands for ‘Hypertext Preprocessor’ , and it is used in the development of web pages that require scripting functions not found within the basic HTML functions. Devised in 1994 by programmer Rasmus Lerdorf, PHP goes beyond and supplements HTML in several ways. How to download your data from Google and Facebook Want to find out how much data Google and Facebook have on you? I did so for my own accounts – many seven or more years old – and across different places, there was a phenomenal amount. Here's how to get the same information on yourself: Subject Access Request

How Badoo saved one million dollars switching to PHP7 Introduction We did it! Hundreds of our application servers are now running on PHP7 and doing just fine. By all accounts, ours is only the second project of this scale (after Etsy) to switch to PHP7. During the process of switching over we found a couple bugs in the PHP7 bytecode cache system, but thankfully it’s all fixed now. Now we’re excited to share our good news with the whole PHP community: PHP7 is completely ready for production, stable, significantly reduces memory consumption, and improves performance dramatically.

Facebook cleansing: How to delete all of your account activity. If I had my way, Facebook would have a hard and fast expiration date for posts. I generally don’t want most of what I say hanging around longer than I’d keep eggs in the fridge. Sure, some links and videos are worth revisiting—but does anyone really care that I was tired on that Monday in 2008? But most of our Timelines are full of this rotting nonsense. There’s no value in it for me, nor for my friends either, most likely. The Future of PHP Do you know which are the popular social networking platforms? Of course, your answer would have names like Facebook, Twitter and so on. The (server-side) programming language which makes these two sites so user-friendly and easy to navigate is PHP (Hypertext Preprocessor).

Hire Expert PHP Developer India PHP is short form of Hypertext Preprocessor. It is one of the most popular free scripting ‘languages’ for developing powerful sites. PHP is server-side scripting terminology that offers large amount of performance for web growth. It offer performance of central data that make easy to developing powerful sites and helping to reduce the running duration of web pages. PHP can be included into HTML and running on the web server which can set up almost every web web servers and operating-system. How to code your first php Web Page - TemplateToaster Blog PHP is one of the most popular programming languages for web development. It is offered nearly ubiquitously on shared hosting platforms. Many of the world’s leading content management systems, such as WordPress, Joomla, Drupal, Magento, Prestashop and lots of other most visited sites like Facebook, Wikipedia, Baidu, Yahoo!, Tumblr, Flickr, MailChimp, Fotolia, Digg, iStockPhoto and many more are written in PHP. Fortunately for developers, learning PHP is not exceptionally challenging.