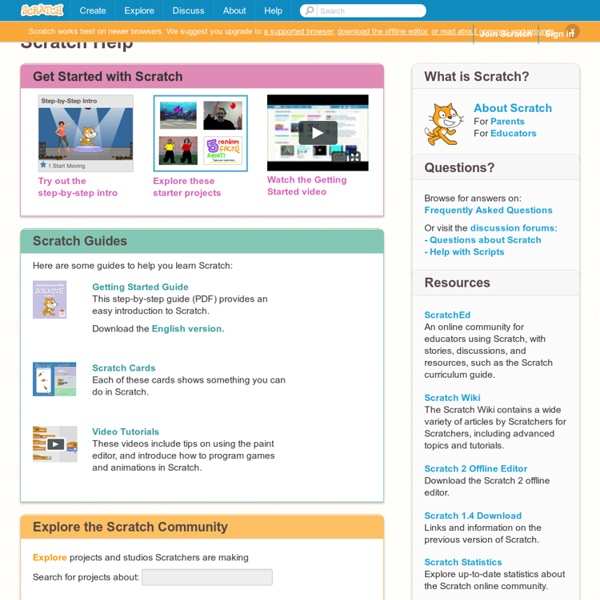 ScratchEd An online community for educators using Scratch, with stories, discussions, and resources, such as the Scratch curriculum guide. Scratch Wiki The Scratch Wiki contains a wide variety of articles by Scratchers for Scratchers, including advanced topics and tutorials. Scratch 2 Offline Editor Download the Scratch 2 offline editor. Scratch 1.4 Download Links and information on the previous version of Scratch. Scratch Statistics Explore up-to-date statistics about the Scratch online community. Scratch and the Physical World Connect your Scratch projects to the physical world with MaKey MaKey, LEGO WeDo, or PicoBoard. Scratch Logo Access the Scratch logo and other media files.

Letters Letters is one of the simplest Scratch applications and is recommended by the team at the MIT Lifelong Learning Group as suitable for one of the first projects created by new Scratch programmers. The idea is to place the letters of your name onto the stage and use your own knowledge of Scratch to program different behaviour into each sprite which happens when you cliick on the sprite. Once you have investigated the letters by clicking on them, you press the space bar and the letters will all return to their original positions. The Scratch Cards are useful for ideas for programming each letter adn there are endless behaviours you can program for each sprite from just spinning the letter around to playing sounds and drawing shapes.

Kodu Kodu is a new visual programming language made specifically for creating games. It is designed to be accessible for children and enjoyable for anyone. The programming environment runs on the Xbox, allowing rapid design iteration using only a game controller for input. Programming as a Creative Medium The core of the Kodu project is the programming user interface. The language is simple and entirely icon-based. Creative Computing 7 units44 activitiesremixing encouraged download the guide> help learnerscreate new worldswith computing download the guide abcya.com - animatsioon ABCya is the leader in free educational computer games and mobile apps for kids. The innovation of a grade school teacher, ABCya is an award-winning destination for elementary students that offers hundreds of fun, engaging learning activities. Millions of kids, parents, and teachers visit ABCya.com each month, playing over 1 billion games last year. Apple, The New York Times, USA Today, Parents Magazine and Scholastic, to name just a few, have featured ABCya’s popular educational games.

The Royal Society of Edinburgh Resources Computing Science → Mobile App Development → This resource, produced by the RSE and the BCS Academy of Computing, provides a course in programming for mobile devices. It exemplifies a subset of the Computing Science-related outcomes of Curriculum for Excellence at Levels 3 & 4 and beyond (specifically, in this case, National 4 Computing Science). It explores new paradigms in Computing such as mobile technologies and new interfaces, whilst providing ample opportunity for inter-disciplinary linkage. Exercises are provided with sample answers and there are many additional activities which can be used to both broaden and deepen the topic. Above all, this resource should not be seen as prescriptive.

Mobile Robotics with Scratch: The whole Truth about the integration of Scratch, Arduino and Bluetooth We wanted to create a simple strategy of integrating Scratch and Arduino to teach programming mobile robots. We came up with 4 tutorials that attack the major problems we encountered. Here they are. For a long time we struggled with the task of creating a simple, low-cost, platform-independent, reliable and stable strategy of integrating Scratch and Arduino in such a way that you could use Scratch to teach the principles and programming of mobile robots (including cars and walkers) to Middle School-aged kids.

Scratch Lesson Plan This lesson plan has been fully revised in September 2009 and is being used to help structure classes in several primary schools in Sussex in the south of England. Originally we devised written notes for teachers and parents but have now moved to providing video lessons for direct communication with the adult or child learning Scratch. Scratch is designed for 8-12 year olds to learn a particular style of programming suited to creating interactive applications with multimedia content. Scratch is often used informally within a school computer club with pupils encouraged to work in pairs on projects that interest them.