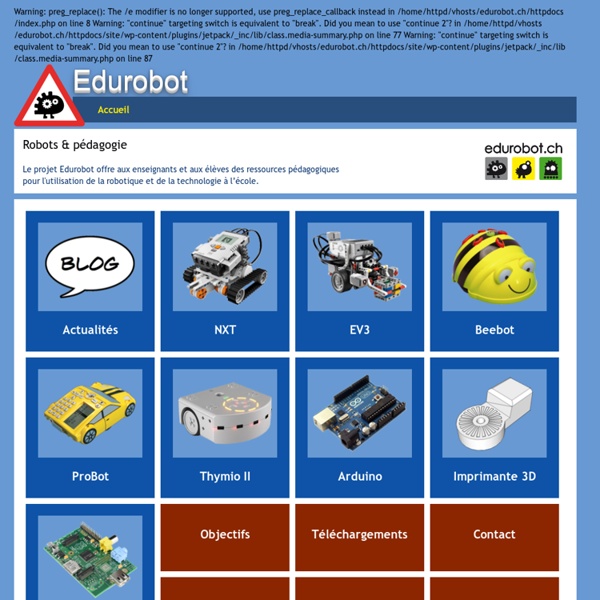 2020-Conception et évaluation de kits robotiques pédagogiques - Thibault Desprez Abstract : The potential of robotic educational activities, and in particular the role of the physical instantiation of these activities, in which the manipulation of digital objects is central, remains tobe confirmed scientifically ; especially in terms of real classroom usability and their impact onthe effectiveness of learning and the motivational engagement of students. Moreover, it seemsthat these impacts also depend on the way in which these pedagogical tools are used (anddiverted) by the teacher in class, as well as by the school context itself. For these reasons, thismanuscript proposes in a first step in articulating a state of art from a variety of disciplinaryfields, notably scientific, such as computer science and robotics, IHM, psychology, cognitivesciences, or the sciences of education ; but also to introduce elements of ethics and societalissues.

About An overview of Kodu. (Click to play) Kodu lets kids create games on the PC and Xbox via a simple visual programming language. Kodu can be used to teach creativity, problem solving, storytelling, as well as programming. Survey on Robotics in education – INBOTS Learning robotics is nowadays no more limited to engineering and technical studies. Robots are spreading outside factories, in everyday life, and this requires that a much wider part of the society becomes aware of how robots are made and can be controlled. In this respect, education plays a fundamental role and INBOTS is compromised with it with a team working on the promotion of highly-accesible and multidisciplinary education programs related to Interactive Robotics.

Kodu Kodu is a new visual programming language made specifically for creating games. It is designed to be accessible for children and enjoyable for anyone. The programming environment runs on the Xbox, allowing rapid design iteration using only a game controller for input. Programming as a Creative Medium