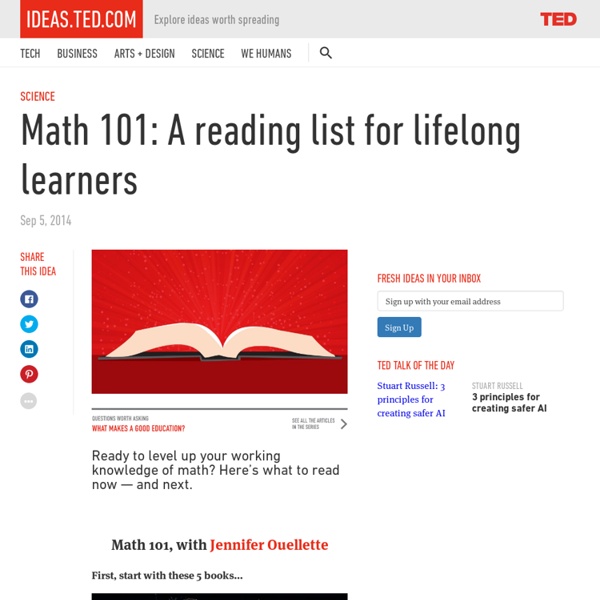 Ready to level up your working knowledge of math? Here’s what to read now — and next. Math 101, with Jennifer Ouellette First, start with these 5 books… 1. Number: The Language of Science Tobias Dantzig Plume, 2007 “First published in 1930, this classic text traces the evolution of the concept of a number in clear, accessible prose. 2. “This bestselling book originally published in 1988 remains one of the best introductions to the basics of large numbers, statistics and probabilities with illustrations drawn from everyday life: sports, the stock market, the lottery and dubious medical claims, to name a few.” 3. “Pair Paulos with the just-released How Not to Be Wrong. 4. “Most of us take zero for granted, but there was a time when it simply didn’t exist, until some enterprising Babylonian soul inserted it as a placeholder in Eastern counting methods. 5. Then, read these 3 foundational texts… 1. 2. 3. Last, here’s one from the cutting edge… And 2 quirky, personal favorites. 1. 2.

1book140: Vote for a Nonfiction Book to Read in March After spending two evenings compiling and researching our many #1book140 nominations for March, I'd like to share a note I made to myself: “Nonfiction” might be an overly broad category for a typical month. Maybe next time, we should limit voting to no more than eight options (and not the fifteen below)? That said, the occasional free-for-all voting period can be fun, too. Let's see how this goes, and please share your comments below and on Twitter. Final note: Sci-fi is our genre for April. Start thinking up and sharing your nominations now using #1book140.​

zerodha 4.1 Overview The initial three chapters has set the background on some of the basic market concepts that you need to know. At this stage it becomes imperative to address a very basic question – Why do companies go public? A good understanding of this topic lays down a sound foundation for all future topics. We will learn new financial concepts during the course of this chapter.

Einstein Vs Quantum Mechanics ... And Why He’d Be A Convert Today Albert Einstein may be most famous for his mass-energy equivalence formula E = mc2, but his work also laid down the foundation for modern quantum mechanics. His analysis of the “spookiness” of quantum mechanics opened up a whole range of applications including quantum teleportation and quantum cryptography, but he wasn’t completely convinced by the theory of quantum mechanics – and that story is as fascinating as the theory he attempted to nail down. Quantum mechanics is downright bizarre.

The Red and the Black Le Rouge et le Noir (French pronunciation: ​[lə ʁuʒ e lə nwaʁ]; French for The Red and the Black) is a historical psychological novel in two volumes by Stendhal, published in 1830.[1] It chronicles the attempts of a provincial young man to rise socially beyond his modest upbringing through a combination of talent, hard work, deception, and hypocrisy—yet who ultimately allows his passions to betray him. The novel’s full title, Le Rouge et le Noir: Chronique du XIXe siècle (The Red and the Black: A Chronicle of the 19th Century),[2] indicates its two-fold literary purpose as both a psychological portrait of the romantic protagonist, Julien Sorel, and an analytic, sociological satire of the French social order under the Bourbon Restoration (1814–30). In English, Le Rouge et le Noir is variously translated as Red and Black, Scarlet and Black, and The Red and the Black, without the sub-title.[3] §Background[edit]

news paper editorials There is a worrying turn of events in Jammu and Kashmir that must be of serious concern to the State and Central governments. The changing character of the insurgency is a warning signal that an urgent course correction is required in Kashmir to prevent the clock being set back by a decade. The election of a federal government with a decisive majority last summer, coupled with the installation of a BJP-PDP government in Jammu and Kashmir, had fuelled expectations that a firm political process would be initiated in the State.

Math Animated Gifs on Geometry, Algebra, Trigonometry and more Download All of our Gifs here! Error : Please Click on "Not a robot", then try downloading again. Gif 1 Pythagorean Theorem Demonstration more on the Pythagorean theorem Gif 2 : johnnylists 1. How to Lie With Statistics by Darrell Huff – A mind opening look at how statistics can be manipulated to dazzle and deceive you. 2. The Man Who Mistook His Wife for a Hat by Oliver Sacks – Take a look at neurological diseases and how one man could mistake his wife for a hat and not even realize it.

How to use 1SD level to form option strategy? How to use 1SD level to form option strategy? To make use of the 1SD trend levels one need strong fundamental in Fibonacci principle. Many trader conclude that the Fibonacci ratios are just numbers. However these numbers has greater meaning, for me each Fibonacci ratio is a sentimental indicator. From past 2 months every week I am posting the nifty future levels as per the Fibonacci and 1SD formula. Form the report you would have understood few things about the Fibonacci psychological indicators. Maxims and mottoes from masters of one-liners: A reading list “Fiction is a dignified form of lies.” “What’s hard to express is easy to understand.” “Everything existing in the universe is the fruit of chance and necessity.” Professional aphorist and all round word nerd James Geary (TED Talk: Metaphorically speaking) collects aphorisms like these — and documents their provenance in his own books.

CFA Level 1 Certification Course About The Instructor Ankur Kulshrestha-CA, CFA Mr. Kulshrestha is a Chartered Financial Analyst & Qualified Chartered Accountant. He has been into CFA training for more than 7 years now. Secondary Teacher Page Current Geometrical reasoning can involve coordinate geometry and properties of 2d and 3d shapes, and may even lead to algebraic representations. These problems invite you to explore geometry in a variety of contexts. 7 Books That Will Change How You See The World If you’re a human and you have a brain, then you probably like using your brain. And if you like using your brain, then you love having those epiphany moments where your hair blows back and you go “Whoa” like Keanu Reeves in The Matrix when he learns Kung Fu from a USB drive in his neck. I know it’s not what the cool kids like to do, but I like to read non-fiction. Lots of non-fiction. And my favorite moments reading non-fiction are when a book bitchslaps my brain and reconfigures my entire understanding of reality and my place within it. I love that.