The Law of One (Ra Material) 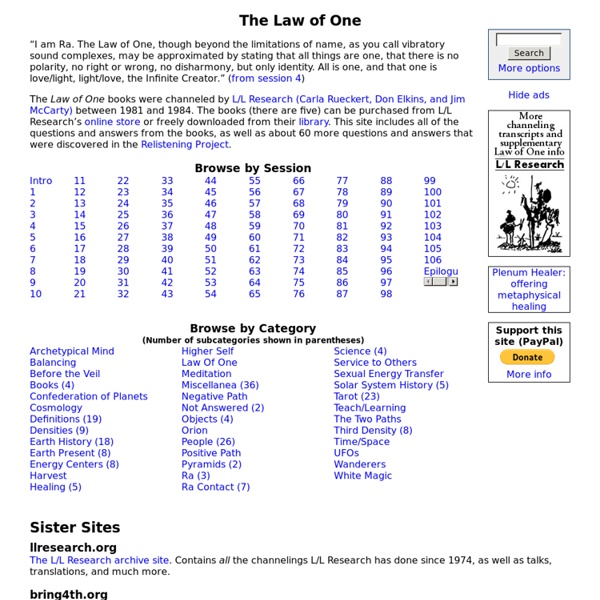 Channeling Abraham For The First Time by Esther and Jerry Hicks In the beginning of our interactions with Abraham, we didn’t really understand what was happening, and we had no real way of knowing whom Jerry was talking with, but it was still thrilling and amazing and wonderful—and weird. It seemed so strange that I was certain that most people I knew wouldn’t understand; they probably wouldn’t even want to understand. As a result, I made Jerry promise that he would tell no one about our amazing secret. I guess it’s now obvious that Jerry didn’t keep that promise, but I’m not sorry about that. Abraham doesn’t seem interested in forecasting our future, as a fortune-teller might, although I believe that they always know what our future holds, but instead they’re teachers who guide us from wherever we are to wherever we want to be. My favorite thing that I’ve ever heard spoken about Abraham came to us from a teenage boy who had just listened to a recording in which Abraham was addressing some questions that teens had been asking.

Prepare for Change Nov 20 – 25th – PORTAL OF CREATION – GOLDEN PARTICLES OF GOD – SOLAR PLEXUS – METATRON | Sacred Ascension - Key of Life - Secrets of the Universe Personal Note: What I am explained is that the days leading up to the portal which will occur on the 22nd of November, we are to focus on releasing as much as we can that has come up for us recently. Many of you are already familiar with how to do this, as I keep talking about this over and over again. For those of you who are new to my channelings, I ask that you please look up the Letting Go article here: I truly recommend The SUN disc during these though times that we’re all going through as it acts as an accelerating device and an attunement instrument to cleanse your DNA from remnants and frequencies past which are affecting your body and your consciousness in a way that is against the good of your higher self. And as such allowing the ascension process to move forward without delay. We are asked to cleanse our palate and prepare for incredible activation which shall take place on the 22nd of our solar plexus. Here is the channeling that I have received: What is consciousness? P.S.

Monthly Transmissions By The Elders - The Melchizedek and PleiadianThe Melchizedek and Pleiadian The Elders Transmission ~ November 2014 Welcome, sweet ones, it gives us great pleasure to be with you in this magical month of November as you experience a greater sense of your creative gifts and a deepening of your star seeded heritage through the 11:11 Gateway of Light. In this month of November sweet ones, amplified through the Full Moon on November the 6th and 7th, you move into a greater sense of the creative energies of the universe, amplified through the beautiful emerald-green ray of Creativity, also known as the fourth ray of Harmony through Conflict. It is a time, sweet ones, in a greater expression of your magnificence and Light, in a greater expression of self-love and self-appreciation, of bringing a focus to your many gifts and the ability to amplify your gifts, to amplify your Heart’s Dreaming and to experience your Heart’s Joy. The first Council of Light that steps forward now is the Sirian Council of Light. And now you bring a focus to the Great White Lodge.

Starchild Global 25 Things You Should Know About Character - StumbleUpon Previous iterations of the “25 Things” series: 25 Things Every Writer Should Know 25 Things You Should Know About Storytelling And now… Here you’ll find the many things I believe — at this moment! 1. Without character, you have nothing. 2. A great character can be the line between narrative life and story death. 3. Don’t believe that all those other aspects are separate from the character. 4. The audience will do anything to spend time with a great character. 5. It is critical to know what a character wants from the start. 6. It doesn’t matter if we “like” your character, or in the parlance of junior high whether we even “like-like” your character. 7. It is critical to smack the audience in the crotchal region with an undeniable reason to give a fuck. 8. You must prove this thesis: “This character is worth the audience’s time.” 9. Don’t let the character be a dingleberry stuck to the ass of a toad as he floats downriver on a bumpy log. 10. 11. 12. 13. The law of threes. 15. 16. 17. 18.