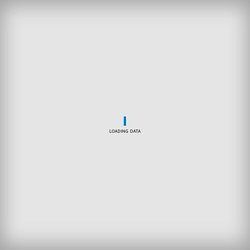 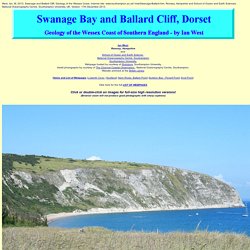 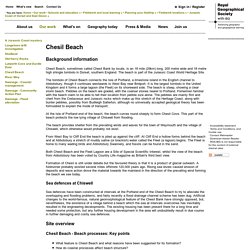 The beach is part of the Jurassic Coast World Heritage Site. The tombolo of Chesil Beach connects the Isle of Portland, a limestone island in the English channel to Abbotsbury, though it continues westwards to West Bay near Bridport. It is the largest tombolo in the United Kingdom and it forms a large lagoon (the Fleet) on its shoreward side. The beach is steep, showing a clear storm beach. Studland. The National Nature Reserve The south east Purbeck National Nature Reserve (NNR) covers an area of 631 hectares and comprises of a variety of habitats which include five kilometers of beach, dunes, woodland, bogs and lowland heath. 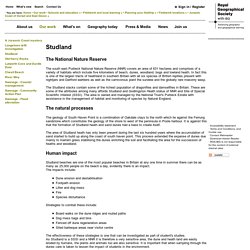 In fact this is one of the largest tracts of heathland in southern Britain with all six species of British reptiles present with nightjars and Dartford warblers as well as the carnivorous plant the sundew and the globally rare masonry wasp. Lulworth Cove and Durdle Door. The management of Lulworth Cove The image of Lulworth that many people have is of a picture postcard fishing village nestled in the Purbeck hills. 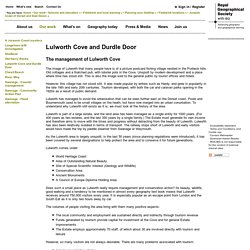 Old cottages and a thatched pub, with lobster pots in the Cove. Unspoilt by modern development and a place where time has stood still. This is also the image sold to the general public by tourist offices and hotels. However, this village has not stood still. Lulworth has managed to avoid the urbanisation that can be seen further east on the Dorset coast. Lulworth is part of a large estate, and the land area has been managed as a single entity for 1000 years.

As the Lulworth area is largely unspoilt, in the last 50 years (since planning regulations were introduced), it has been covered by several designations to help protect the area and to conserve it for future generations. Lulworth comes under: Does such a small place as Lulworth really require management and conservation action? However, so many visitors are not always desirable. Rangers. Old Harry Rocks. Old Harry Rocks is the first major point of interest along the UNESCO World Heritage Site of the Jurassic Coast which covers the coast of Dorset and East Devon to Orcombe Point near Exmouth. 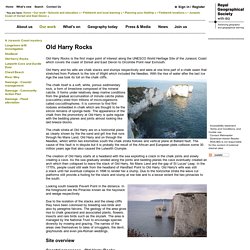 Old Harry and his wife are chalk stacks and stumps respectively and were at one time part of a chalk seam that stretched from Purbeck to the Isle of Wight which included the Needles. With the rise of water after the last Ice Age the sea took its toll on the chalk cliffs. The chalk itself is a soft, white, porous sedimentary rock, a form of limestone composed of the mineral calcite. It forms under relatively deep marine conditions from the gradual accumulation of minute calcite plates (coccoliths) shed from trillions of micro-organisms called coccolithophores. It is common to find flint nodules embedded in chalk which are thought to be the silicon remains of sponge beds. BBC Bitesize - National 5 Geography - Old Harry Rocks - coastal processes and landforms. Dorset and East Devon Coast. Jurassic Coast. 1. 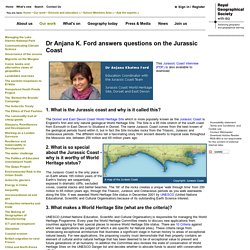 What is the Jurassic coast and why is it called this? The Dorset and East Devon Coast World Heritage Site which is more popularly known as the Jurassic Coast is England’s first and only natural geological World Heritage Site. The Site is a 95 mile stretch of the south coast from Exmouth in East Devon to Studland in Dorset. The name Jurassic Coast comes from the best known of the geological periods found within it, but in fact the Site includes rocks from the Triassic, Jurassic and Cretaceous periods.

The different rocks tell a fascinating story from ancient deserts to tropical seas throughout the Mesozoic era, between 250 million and 65 million years ago. 2. The Jurassic Coast is the only place on Earth where 185 million years of the Earth’s history are sequentially exposed in dramatic cliffs, secluded coves, coastal stacks and barrier beaches. 3. UNESCO (United Nations Education, Scientific and Cultural Organisation) is responsible for managing the World Heritage Programme. The Jurassic Coast World Heritage Site.