Analyzing Likert Data. Introduction Over the years, numerous methods have been used to measure character and personality traits (Likert, 1932). 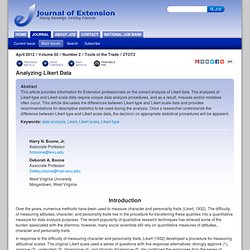 The difficulty of measuring attitudes, character, and personality traits lies in the procedure for transferring these qualities into a quantitative measure for data analysis purposes. The recent popularity of qualitative research techniques has relieved some of the burden associated with the dilemma; however, many social scientists still rely on quantitative measures of attitudes, character and personality traits. In response to the difficulty of measuring character and personality traits, Likert (1932) developed a procedure for measuring attitudinal scales. The original Likert scale used a series of questions with five response alternatives: strongly approve (1), approve (2), undecided (3), disapprove (4), and strongly disapprove (5). 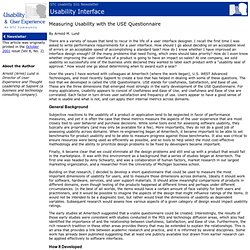 Lund There are a variety of issues that tend to recur in the life of a user interface designer. I recall the first time I was asked to write performance requirements for a user interface. How should I go about deciding on an acceptable level of errors or an acceptable speed of accomplishing a standard task? Over the years I have worked with colleagues at Ameritech (where the work began), U.S. General Background Subjective reactions to the usability of a product or application tend to be neglected in favor of performance measures, and yet it is often the case that these metrics measure the aspects of the user experience that are most closely tied to user behavior and purchase decisions.

Finally, it became clear that we could eliminate all the design problems and still end up with a product that would fail in the marketplace. The early studies at Ameritech suggested that a viable questionnaire could be created. How It Developed. Measuring satisfaction: Beyond the usability questionnaire. Measuring user satisfaction A common mistake made by novice usability test moderators is to think that the aim of a usability test is to elicit a participant's reactions to a user interface. 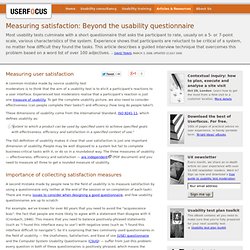 Experienced test moderators realise that a participant's reaction is just one measure of usability. To get the complete usability picture, we also need to consider effectiveness (can people complete their tasks?) And efficiency (how long do people take?). These dimensions of usability come from the International Standard, ISO 9241-11, which defines usability as: Usability and user experience surveys. This article or section is a stub. 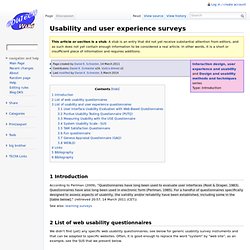 A stub is an entry that did not yet receive substantial attention from editors, and as such does not yet contain enough information to be considered a real article. In other words, it is a short or insufficient piece of information and requires additions. 1 Introduction According to Perlman (2009), “Questionnaires have long been used to evaluate user interfaces (Root & Draper, 1983). Questionnaires have also long been used in electronic form (Perlman, 1985). See also: learning surveys 2 List of web usability questionnaires We didn't find (yet) any specific web usability questionnaires, see below for generic usability survey instruments and that can be adapted to specific websites. Evaluating the usability of visualization methods in an exploratory geovisualization environment - International Journal of Geographical Information Science - Volume 20, Issue 4.

The use of new representation forms and interactive means to visualize geospatial data requires an understanding of the impact of the visual tools used for data exploration and knowledge construction. 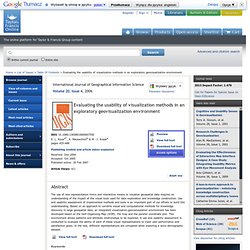 Use and usability assessment of implemented methods and tools is an important part of our efforts to build this understanding. Based on an approach to combine visual and computational methods for knowledge discovery in large geospatial data, an integrated visualization‐geocomputation environment has been developed based on the Self‐Organizing Map (SOM), the map and the parallel coordinate plot. This environment allows patterns and attribute relationships to be explored. A use and usability assessment is conducted to evaluate the ability of each of these visual representations to meet user performance and satisfaction goals.

In the test, different representations are compared while exploring a socio‐demographic dataset. Keywords Related articles View all related articles.