Together we can all go solar 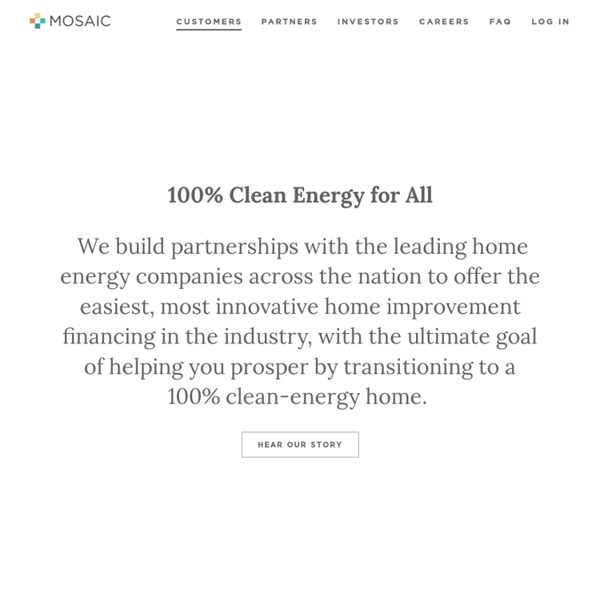 Electricity from the sun and the wind Major Objectives To reduce the economic and institutional barriers between people and sustainable housing. To begin reversing the overall negative effect that conventional housing has on the planet. To create a less stressful existence for people in an effort to reduce the stress that they in turn place on the planet and each other. New Car Engine Sends Shock Waves Through Auto Industry Despite shifting into higher gear within the consumer's green conscience, hybrid vehicles are still tethered to the gas pump via a fuel-thirsty 100-year-old invention: the internal combustion engine. However, researchers at Michigan State University have built a prototype gasoline engine that requires no transmission, crankshaft, pistons, valves, fuel compression, cooling systems or fluids. Their so-called Wave Disk Generator could greatly improve the efficiency of gas-electric hybrid automobiles and potentially decrease auto emissions up to 90 percent when compared with conventional combustion engines.

Car that runs on nothing but water unveiled in Japan. No gasoline, no battery recharging and no emissions. “All that is necessary for the triumph of evil is for good men to do nothing." ~ Edmund Burke Bill Clinton announced what it represented in his State of the Union Address Jan 27, 2000 ~ “It is a Rising Sun!” The Eye of Horus. Free-Energy Devices, zero-point energy, and water as fuel FREE ENERGY: WHAT THE GLOBAL ELITE DON’T WANT YOU TO KNOW Stanley Meyer