Next Steps: after earthquake, the monsoon

In Nepal the Pols Play Their Game of Thrones, But Winter Is Coming. They come from Russia, France—even New Jersey—to end their lives for an ‘Islamic State.’ 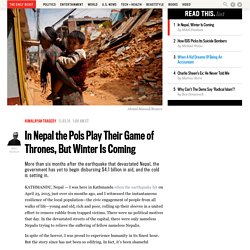 But an ISIS defector reveals that Saddam’s old spies are the ones holding all the triggers. For all the attention paid to ISIS, relatively little is known about its inner workings. But a man claiming to be a member of the so-called Islamic State’s security services has stepped forward to provide that inside view.

This series is based on days of interviews with this ISIS spy. Read part one here. Part Two: Spies Like ISIS ISTANBUL — “Suicide bomber is a choice,” said the man we’ll call Abu Khaled, stubbing out a Marlboro Red and lighting a new one. “We do not exist” Seven months since the earthquake, what little help survivors were getting to rebuild has been halted by the Indian blockade On 25 April, when the earthquake devastated central Nepal, relief groups warned that shelters needed to be built before the impending monsoon. 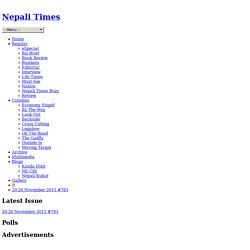 The rainy season has come and gone and winter set in, but government inaction and the Indian blockade means two million people are still homeless. The Reconstruction Authority has been mired in Kathmandu’s politics, and the $4.1 billion promised by the international community soon after the quake cannot be disbursed. The UN and private relief groups involved in relief and reconstruction have cut back on deliveries because of the lack of fuel. Nepal border blockade 'threatens the future of the country itself', says UN. Unicef has cautioned that the blockade of Nepal’s border posts with India “threatens the future of the country itself”. 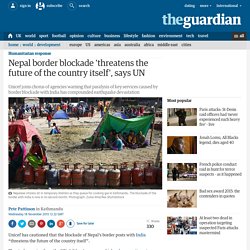 The stark warning from the UN children’s agency, which echoes sentiments expressed by Nepal’s deputy prime minister, Kamal Thapa, earlier this month, follows calls by aid agencies working in the country for an urgent resolution to the crisis. “First, there was a devastating act of nature – the earthquakes that took and damaged so many lives,” said Anthony Lake, the executive director of Unicef, during a recent visit to the country. “Now, political differences among human beings are dealing new blows to the children of Nepal.” Fuel crunch mars post-earthquake relief works. Children stand on the remains of houses which were destroyed by earthquakes in Sindhupalchok district, Nepal, May 13, 2015. 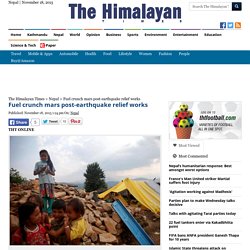 Children run next to their makeshift shelter near a landslide area after the April 25 earthquake at Jure village in Sindhupalchok, Nepal, May 9, 2015. 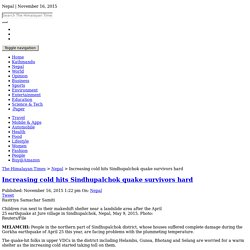 Photo: Reuters/File MELAMCHI: People in the northern part of Sindhupalchok district, whose houses suffered complete damage during the Gorkha earthquake of April 25 this year, are facing problems with the plummeting temperature. The quake-hit folks in upper VDCs in the district including Helambu, Gunsa, Bhotang and Selang are worried for a warm shelter as the increasing cold started taking toll on them. Furthermore, the porous roofs have added to the worries of those residing in temporary shelters, including under the tarpaulin sheets, following the quake. Elderly persons and children have been most affected due to the fall in temperature as they are prone to pneumonia and common cold among others. Poshan Prasad Dahal, a quake survivor, said that the leaking roof above worries him how to live through the winter.

Nepal's slow earthquake recovery raises possibility of grim winter. There is no sign of the government-promised new houses that were to shelter millions of victims of Nepal's devastating spring earthquake. 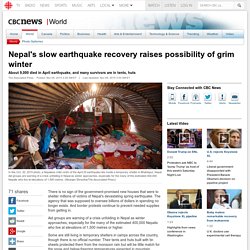 The agency that was supposed to oversee billions of dollars in spending no longer exists. And border protests continue to prevent needed supplies from getting in. What Every Nepali needs to know about getting petrol or LP gas from China during the petrol crisis. Annaupurna. 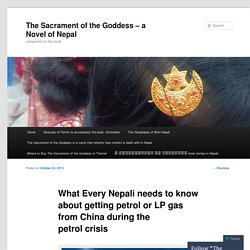 Every Nepali knows that the mountains are there. I was once told that when a Nepali child asks their mother “what’s on the other side?” Glogin?URI= UN concerned over delay in delivery of humanitarian supplies to Nepal earthquake-hit areas due to fuel shortage - The Himalayan Times. File- A woman salvaging goods from her damaged house in an earthquake-hit village. 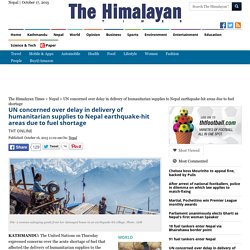 Photo: ADB World Turkey downs drone as Syria launches Aleppo offensive Turkey shot down a drone on Friday in an incident ... Lifestyle Be a precursor of greener Dashain Dashain is a time of joy, and family togetherness.... Business Global stocks at two-month highs, dollar up; oil down for week Stocks in major world markets rose to a two-month ... Women Dashain shopping amidst fuel crisis New clothes take a back seat as people invest this... As Snow Creeps Down From Himalayas, Nepal Reconstruction Stalls. Photo MANEBHANJYANG, Nepal — On a steep slope in the foothills of the Himalayas one recent afternoon, Omnath Timilsena surveyed what remains of his earthquake-ravaged village in Nepal.

By Mr. The Kiwi way to reconstruction. Following building codes and strengthening existing buildings is the only way to prepare for the next one Aside from the fact that New Zealand and Nepal sit next to each other alphabetically at international conferences, the two countries couldn’t be more different. 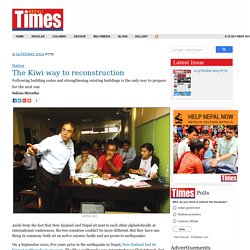 But they have one thing in common: both sit on active seismic faults and are prone to earthquakes. On 4 September 2010, five years prior to the earthquake in Nepal, New Zealand had its biggest earthquake in 70 years. The M7.1 earthquake was epicentred near Christchurch, but it didn’t kill anyone. However, six months later a weaker M6.3 quake struck again and caused structures weakened by the previous earthquake to collapse. In both Nepal and New Zealand, earthquakes are not predictable but are expected. The reason is simple: New Zealand has stringent building codes and actually enforces them. The heart of the matter, part 2.

This article is the second in a three-part series on the aftermath of the April 2015 earthquake in Nepal. Read Part 1 here. Ashok Tamang was the most educated person in Gatlang village. He was, in his own words, “I.A. –failed,” meaning, he passed the tenth grade board exam but could not make it through twelfth grade. He was among those who had been working round the clock to bring relief to his village—coordinating with relief organizations and groups, preparing lists of households, assessing people’s needs, mediating potential conflicts, orienting Kathmandu visitors with local social and political dynamics, and ensuring that relief was distributed in an organized and equitable manner. Fears grow for Nepal’s pregnant women after quake. Junu Shrestha (centre) holding her child asshe sits at a makeshiftbirthing centre in the village of Gerkhu in Nuwakot. Photo: AFP Real Estate Substandard construction material still a threat Despite having specifications and standards for al...

Lifestyle Styling chinos well Chinos look very smart if styled well. Pairing it ... Entertainment Iranian film on Prophet Mohammad stirs calls for Tehran to ban it A film on the life of Prophet Mohammad is expected... Gerkhu, August 28. Earthquake-hit families face shortage of food. Voices: Violence paralyzes earthquake-torn Nepal. KATHMANDU — For many in Nepal, the earthquake is not finished. More than three million people are still living in temporary shelters during torrential monsoon rains. We have daily aftershocks, over 380 of them above magnitude 4, since the 7.8 magnitude quake hit on April 25th. But, as if that were not enough to cope with, now Nepal is being torn apart by violent protests, a country virtually held hostage by rioting and strikes. Angry protesters are setting buildings, cars and trucks on fire and attacking police who counter with tear gas, baton charges and bullets. All because Nepal is about to adopt a new constitution.

On Monday, at least eight people were killed in clashes in Kailali in western Nepal, most of them police, including a senior police officer who was speared to death and another set on fire as thousands of demonstrators clashed with security forces. Making a constitution here is a very messy process. Rebuilding Nepal: The rubble must go. Kathmandu, Nepal - Nepal faces a monumental task to rebuild after the powerful April 25 earthquake, which killed more than 8,000, destroyed tens of thousands of homes and displaced more than two million. With only a small window of time between the end of the rainy season in September and the beginning of winter, which will be particularly brutal for mountain communities living in temporary shelters, the task of reconstruction is an urgent one.

The earthquake destroyed over 600,000 homes and damaged nearly 300,000, according to the latest government figures. Amidst the rubble and debris of flattened buildings in many of the affected areas, schools and shops have reopened and people have built makeshift dwellings. Travel Blog by Kunda Dixit. Do we have the political will to save time and money to fuse the long-pending Disaster Management Authority with the Reconstruction Authority? Photo: Bikram Rai How soon the earthquake has been forgotten, and the country has drifted back to politics as usual. The constitution is finally taking shape, but the attempt by the four top parties to ram through boundaries of six provinces in the draft last week set off a political earthquake.

Aftershocks are still being felt, especially in western Nepal. The delineation of boundaries was ad hoc, haphazard and arbitrary. Better build back. Building back Bungamati. 100 days later, historic town struggles to rebuild and overcome a shortage of masons Om Astha Rai After the earthquake flattened her house in this historic town on the southern fringes of Kathmandu Valley, Sunita Shrestha looked for a mason to build a shelter.

Photo blog from Nepali Times » Blog Archive » Monsoon mélange. Ruin in the rain. Photos: Gopen Rai. Nepalis scramble in camps, three months after quake. Made to jump through hoops. Instead of making things easier for earthquake survivors, the government machinery is structured to make it as hard as possible to get help. Photo: Cody Tuttle This was never a government that could multi-task. Fixated on finishing the constitution, it couldn’t even begin thinking about kick-starting rural development by organising local elections. Homeless Nepali porters find work carrying UN aid. Nepal's farmers need more than seeds and new tools to recover from quakes. Government to evacuate quake victims from Tundikhel by Friday.

Landslides sweep away 60 houses at Keraunja, 475 at high risk. Monsoon woes in Kathmandu roads (Photo Gallery) Weather experts have predicted the moderate and heavy rainfall being experienced across the country to continue for a few more days. The Tamang epicentre. Marooned by the monsoon. The sun to the rescue. Nepali Times Buzz. My Republica - Post-quake, Tatopani under existential threat. At least 56 settlements to be relocated. The Indifferent Republic. Go Inside the Effort to Rebuild Nepal. Carving out a niche. Landless before, landless after. Do they have what it takes to rebuild Nepal? Nepal donors' 'concern' over end of emergency quake aid - BBC News. Nepal: Reconstruction must not leave behind those most affected by the earthquake. Donors’ meet begins today. WB pledges fund for Nepal. Nepal: Transitional Shelters & Household Surveys. My Republica - Simrik Air chopper crashes in Gorkha.

Operation Mountain Express. The honeymoon is over. Nepali Times. Taplejung landslides kill 36. The Best Disaster Relief Fosters Independence  Nepal’s earthquake disaster is out of the news, but far from over - Features - Mikeldunham: POLITICS BE DAMNED: The Post-Earthquake Unreliability of Nepal’s Government. Survivors, not victims. Nepal: joint post-earthquake initiatives by ICOMOS, ICCROM, ICOM and the Smithsonian Institution - International Council on Monuments and Sites.

Reinstated taxes, supply shortage hamper aid delivery in Nepal. Shaken by quakes, Nepal now needs to survive the monsoon. Are landslides Nepal’s next big killer? Quake from space. When it rains, it pours. Soon, the monsoon.