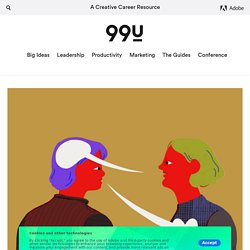 Beginning with Thanksgiving, we enter a season that welcomes us to reflect, take stock, and express gratitude for the past 12 months. Welcome to AirSpace. By Kyle Chayka | Illustrations by Daniel Hertzberg Igor Schwarzmann is the German co-founder of Third Wave, a strategy consultancy based in Berlin that works with small-scale industrial manufacturers. 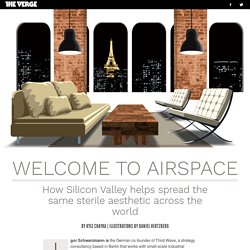 The company’s clients range across Europe, the United Kingdom, and the United States, so Schwarzmann often finds himself moving between poles of the global economy. Why I ignore the design industry on purpose. I’ve been a designer for nearly twenty years now (😮), with the last seven years spent happily at Basecamp. 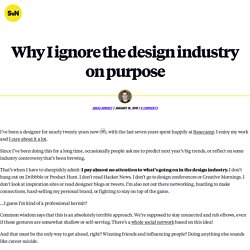 I enjoy my work and I care about it a lot. Since I’ve been doing this for a long time, occasionally people ask me to predict next year’s big trends, or reflect on some industry controversy that’s been brewing. Life Below 600px. Some people would have you believe that you aren't reading this. 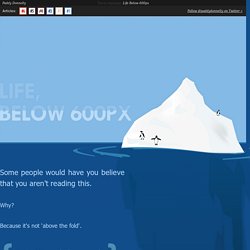 Why? Because it's not 'above the fold'. Welcome to AirSpace. A quick beginner’s guide to drawing – Personal Growth. The basic craft of drawing is about two things: you learn to control your hand and to see. 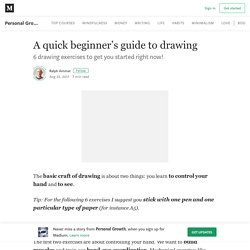 Tip: For the following 6 exercises I suggest you stick with one pen and one particular type of paper (for instance A5). Dexterity — two workouts The first two exercises are about controlling your hand. We want to build muscles and train our hand-eye-coordination. Responsive Logo Design & Branding Guide for Websites. This article was contributed by Evan Brown. 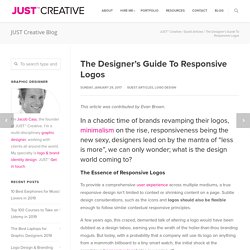 In a chaotic time of brands revamping their logos, minimalism on the rise, responsiveness being the new sexy, designers lead on by the mantra of “less is more”, we can only wonder; what is the design world coming to? The Essence of Responsive Logos To provide a comprehensive user experience across multiple mediums, a true responsive design isn’t limited to context or shrinking content on a page. UX Myths. The Ideal Design Workflow. How to Declutter your Design – WDstack. I’ts been said that “simplicity is an art form”, and in the case of UI design nothing could be more true. 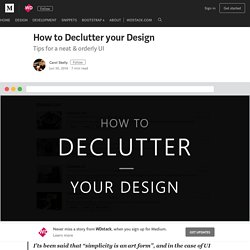 How To Redesign A Website - Best Practices And Checklist. Forget about your f**king logo. Nobody cares. – Domain Product Design Blog. So, if my logo isn’t my brand, what is? 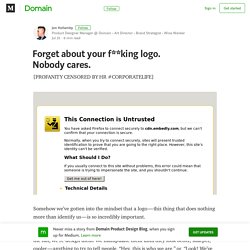 A closer look at experiential identity Take a look at most of the brand guidelines floating around (especially any old ones I designed) and they probably look something like this: Our Amazing Logo™Logo Do’s and Don’tsOur FontOur Pretty ColoursOur Visual LanguageFlashy examples of our Brand on a poster, a tote bag, business cards and other things that will never get produced. 11 Website Layouts That Made Content Shine in 2017. Sur la productivité de l'écrit vs clavier : Productivity Coach in a Notebook. Everyone wants to be more productive; spend less time working and more time having fun. 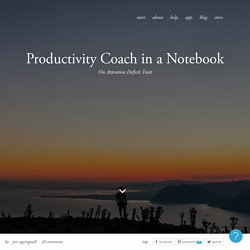 Finding time to do the things that brings us joy is becoming increasingly more difficult. Heck, having time to stop and think about what actually brings us joy seems impossible sometimes; if we stop there’s always the fear of missing out (FOMO). I wanted to see how far I could push myself creatively. So I redesigned Instagram. Paula Scher on Why and When it’s Worth it to Work for FreeEye on Design. This is the first article in a new Design + Money series, which tackles a different issue each month about fair compensation for the creative community. 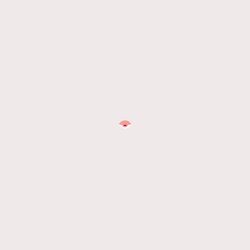 Don’t think, just answer: should you get paid for your work? The obvious response is “yes,” but the right answer is “not always.” At least, not in the way you’ve come to think about what it means to get paid. And while the case against working for free may seem like a no-brainer, a powerful group of people is taking a mighty hard line in the opposing direction, led by one of the strongest voices in the design community, Pentagram partner Paula Scher. You might find this surprising, enviable, or obvious depending on what side of this divisive issue you fall. Rethinking The Ethics Of Photoshop. Ten years ago, a set of five oaths called the Designers Accord aimed to establish a code of ethics around sustainability in the design industry. More than 1,000 design firms and organizations voluntarily adopted the accord, as well as thousands of individuals from 100 countries and six continents, helping to raise awareness about eco-friendly design while giving designers a concrete way to engage clients in conversations about sustainability—today, a commonplace practice.

Now, the designer Sarah Krasley is trying to create a new kind of accord, this time for those in the business of making images. She calls it the Retouchers Accord, a Hippocratic oath for authenticity in images. The first draft of the five-part oath, modeled after the Designers Accord, places an impetus for change on the entire system, from casting directors to graphic designers to photographers to businesspeople. Culture - Dear Data: The designers who turned daily habits into art. Have you ever wondered how many times you swear in a week? How many doors you pass through? How often you check the time, and how that corresponds to moments of stress, hunger or activity? Intro to the 8-Point Grid System – Built to Adapt – Medium. As a designer you’ve probably heard the term grid whether you’re designing a website, a magazine, or a mobile app.

The 8 Worst UX Mistakes Coming From Experts – The Startup – Medium. Have you ever asked yourself what UX is all about? The Coming Revolution in Email Design. Email, the web’s much maligned little cousin, is in the midst of a revolution—one that will change not only how designers and developers build HTML email campaigns, but also the way in which subscribers interact with those campaigns. Article Continues Below Despite the slowness of email client vendors to update their rendering engines, email designers are developing new ways of bringing commonplace techniques on the web to the inbox.

Effects like animation and interactivity are increasingly used by developers to pull off campaigns once thought impossible. And, for anyone coming from the world of the web, there are more tools, templates, and frameworks than ever to make that transition as smooth as possible. For seasoned email developers, these tools can decrease email production times and increase the reliability and efficacy of email campaigns. What Soviet Propaganda Can Teach Us About Creativity - Ceros Blog. Varia Bortsova’s career path has taken a few interesting twists and turns. Born in Moscow just one year before the fall of the Soviet Union, the 26-year-old began her professional career as a touring ballerina with a prestigious Russian dance company—a product of the national ballet training system.

What UX Designers Can Learn From Video Games.