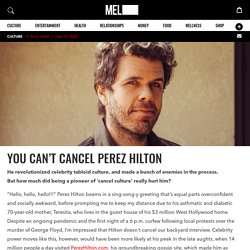 Perez Hilton beams in a sing-song-y greeting that’s equal parts overconfident and socially awkward, before prompting me to keep my distance due to his asthmatic and diabetic 70-year-old mother, Teresita, who lives in the guest house of his $3 million West Hollywood home. Despite an ongoing pandemic and the first night of a 6 p.m. curfew following local protests over the murder of George Floyd, I’m impressed that Hilton doesn’t cancel our backyard interview.

Celebrity power moves like this, however, would have been more likely at his peak in the late aughts, when 14 million people a day visited PerezHilton.com, his groundbreaking gossip site, which made him as famous as the stars he ridiculed with nicknames like “Sluttyienna” (Sienna Miller); “Potato Head” (Rumer Willis); and “Maniston” (Jennifer Aniston). Most gay men hate Perez Hilton, he admits, and if they don’t, their friends likely do. The Looming Mystery Behind the Panama Papers: How Did the Largest Document Leak In History Even Happen? “Hello. 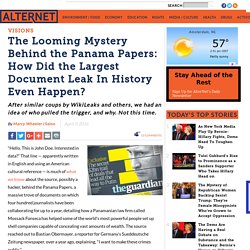 This is John Doe. Interested in data?” That line — apparently written in English and using an American cultural reference — is much of what we know about the source, possibly a hacker, behind the Panama Papers, a massive trove of documents on which four hundred journalists have been collaborating for up to a year, detailing how a Panamanian law firm called Mossack Fonseca has helped some of the world’s most powerful people set up shell companies capable of concealing vast amounts of wealth. Corporate Media Guard Secrets of Western 1% in Panama Leak – Wage Info War on Russia/China.

While it seems the Panama Papers are a genuine attempt at exposing rampant corruption of the world’s corporate-political uber-elite, a closer inspection reveals a likely Western geopolitical power play utilizing the latest techniques in information warfare. 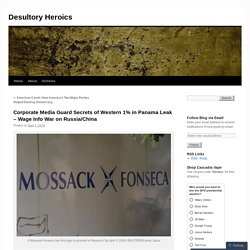 The 11.5 million documents that were stolen from Mossack Fonseca were leaked to Suddeutsche Zeitung, which then turned to the International Consortium of Investigative Journalists to investigate the documents. This process created a dynamic where control of the information resides in the hands of corporate mainstream media, thus allowing them to cherry pick stories they deem “newsworthy” – this exclusive access is troubling. The reason this exclusive access is troubling becomes apparent when one recalls the infamous incident where The Guardian physically smashed the copies of the Snowden files in their possession upon the command of MI6 and the British government. How Reporters Pulled Off the Panama Papers, the Biggest Leak in Whistleblower History. Click to Open Overlay Gallery When Daniel Ellsberg photocopied and leaked the Pentagon Papers to the New York Times in 1971, those 7,000 pages of top secret Vietnam War documents represented what was then the biggest whistleblower leak in history—a couple dozen megabytes if it were contained in a modern text file. 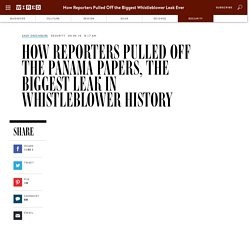 Almost four decades later, WikiLeaks in 2010 published Cablegate, a world-shaking, 1.73 gigabyte collection of classified State Department communications that was almost a hundred times bigger. If there’s some Moore’s Law of Leaks, however, it seems to be exponential. Just five years have passed since WikiLeaks’ Cablegate coup, and now the world is grappling with a whistleblower megaleak on a scale never seen before: 2.6 terabytes, well over a thousandfold larger. Area 51 'Uncensored': Was It UFOs Or The USSR? 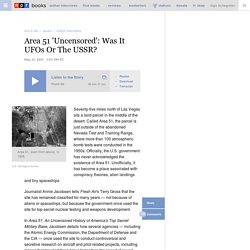 U.S. Geological Survey hide caption itoggle caption U.S. “Mockingjay”s eerie echoes of Ferguson: Our real dystopian nightmare. In the midst of events of Ferguson, Missouri this week, it’s been difficult to maintain focus on “pop culture,” whatever that is. 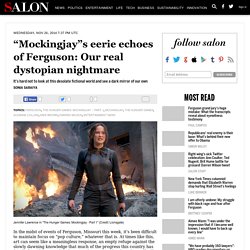 At times like this, art can seem like a meaningless response, an empty refuge against the slowly dawning knowledge that much of the progress this country has fought for is being rendered meaningless—most clearly and specifically when it comes to race relations. The scene on national news Monday night could have been a replay of the 1992 riots in response to the Rodney King assailants’ acquittal—and in that case, there was a trial. In the 22 years since the Rodney King trial; in the 59 years since the Emmett Till trial; in the 17 months since the Trayvon Martin trial—one would hope that some progress had been made. And yet here we are, looking at a situation where the murder of a young man by a police officer is not considered worthy of a mere indictment, let alone a guilty charge, and it feels like the past is replaying right before our eyes.

Michael Brown was not a boy, he was a 'demon' All of the discussions about Ferguson are going in circles. 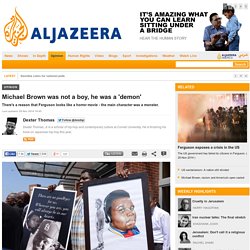 Nothing seems to work. We can make Twitter hashtags. We can bring up all the statistics we like. We can talk about the string of recent deaths of black men (and one 12-year-old boy). The Truth About The Ferguson Case That Some People Really Can't Accept. Some things I have learned: ProPublica recently did an in-depth analysis and found that black kids between ages 15-19 are 21 times more likely to be shot and killed by cops than white kids of the same age. 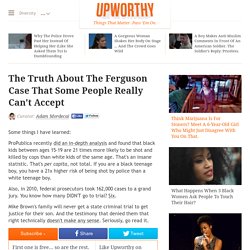 That's an insane statistic. That's per capita, not total. If you are a black teenage boy, you have a 21x higher risk of being shot by police than a white teenage boy. Also, in 2010, federal prosecutors took 162,000 cases to a grand jury. Mike Brown's family will never get a state criminal trial to get justice for their son. Police have a hard job. The Laramie Projection. Ex-Pentagon Janitor Writes Tell-All Book Roasting Leon Panetta. Records show mistakes, questionable evidence in woman's overturned murder case - Tulsa World: Homepage1. See related story: Tulsa woman ruled innocent after 20 years in prison Related Story: Who are the key players in 20-year-old murder case? 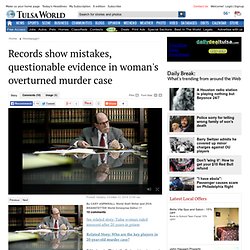 Editor’s note: This is the first part in a two-part series examining the prosecution and exoneration of Michelle Murphy. Prosecutor Tim Harris stood before jurors deciding Michelle Murphy’s fate and told them police found someone’s blood near her slain baby’s body — blood he implied could be hers. Dark Alliance: The Story Behind the Crack Explosion. Managing a Nightmare: How the CIA Watched Over the Destruction of Gary Webb. Eighteen years after it was published, “Dark Alliance,” the San Jose Mercury News’s bombshell investigation into links between the cocaine trade, Nicaragua’s Contra rebels, and African American neighborhoods in California, remains one of the most explosive and controversial exposés in American journalism. 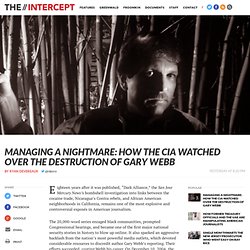 The 20,000-word series enraged black communities, prompted Congressional hearings, and became one of the first major national security stories in history to blow up online. Handcuffed Black Youth Shot Himself to Death, Says Coroner. A coroner’s report obtained exclusively by NBC News directly contradicts the police version of how a 22-year-old black man died in the back seat of a Louisiana police cruiser earlier this year -- but still says the man, whose hands were cuffed behind his back, shot himself. In a press release issued March 3, the day he died, the Louisiana State Police said Victor White III apparently shot himself in an Iberia Parish police car.

According to the police statement, White had his hands cuffed behind his back when he shot himself in the back. How the Term ‘Human Shield’ is Used to Justify State Sponsored Massacres. The Poltergeist Phenomenon. 16-Year-Old Creates App to Expose Corrupt Politicians. Photo Credit: via Nick Rubin's Twitter page July 23, 2014 | Like this article? Join our email list: Stay up to date with the latest headlines via email. While it's easy and almost safe to assume that most of today's politicians take large donations from dubious corporate interests—given the fact that we live in an oligarchy and all—inquiring minds still want to keep track of who's taking money from big oil, big pharma, big defense contractors, you name it.

Seattle teenager Nick Rubin recently made keeping track of the money trail a whole lot easier with his creation Greenhouse, a browser plug-in that operates under the motto "Some are red. Said to be surprisingly easy to use, the app shines a light on dark money, and helps you deepen your understanding of why your representatives vote the way they do. Meet the journalist who accuses Mexican presidents of links to drug cartels. Please support our site by enabling javascript to view ads. MEXICO CITY — It is not easy for any reporter to cover drug trafficking in Mexico, a country where more than 80 journalists have been shot, stabbed, bludgeoned to death or decapitated since 2006. America's Love of All Things Nuclear: Starfish Prime. Report Suggests NSA Engaged In Financial Manipulation, Changing Money In Bank Accounts.

Project Mkultra: One of the Most Shocking CIA Programs of All Time. Ain't No Party Like a Skull & Bones Party. I was actually in one of the societies at Yale, though not S&B or one of the other really old ones. There's a culture that goes along with it. Full-text search. Leaked: Big Pharma Bought Human Guinea Pigs from Stasi East Germany : The Ultimate Weapon of Mass Destruction: “Owning the Weather” for Military Use.

Author’s Introductory Note Environmental modification techniques (ENMOD) for military use constitute, in the present context of global warfare, the ultimate weapon of mass destruction. Uncovering the Kent State Cover-Up. When Ohio National Guardsmen fired sixty-seven gun shots in thirteen seconds at Kent State University (KSU) on May 4, 1970, they murdered four unarmed, protesting college students and wounded nine others. For forty-two years, the United States government has held the position that Kent State was a tragic and unfortunate incident occurring at a noontime antiwar rally on an American college campus.

In 2010, compelling forensic evidence emerged showing that the Federal Bureau of Investigation (FBI) and the Counter Intelligence Program (COINTELPRO) were the lead agencies in managing Kent State government operations, including the cover-up. Whistleblower Brad Birkenfeld Gets Record $104M for Exposing How UBS Helped Rich Evade Taxes. The IRS has announced a record $104 million reward to a whistleblower who exposed the largest tax evasion scheme in U.S. history. Melanie Bavaria: As Journalism 'Dies,' Young French and American Writers Take Matters Into Our Own Hands. The Price of Truth.