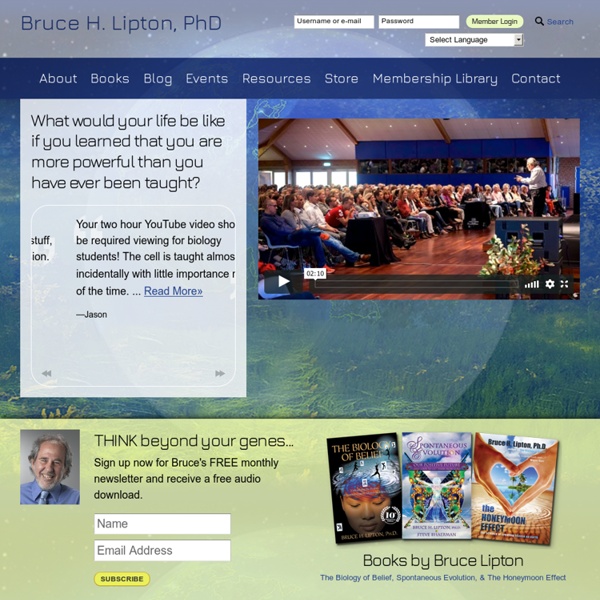 The Biology of Belief: Unleashing the Power of Consciousness, Matter & Miracles | Bruce Lipton This new updated and expanded 10th anniversary edition of The Biology of Belief will forever change how you think about your own thinking. Stunning new scientific discoveries about the biochemical effects of the brain’s functioning show that all the cells of your body are affected by your thoughts. Bruce H. Lipton, Ph.D., a renowned cell biologist, describes the precise molecular pathways through which this occurs. “I read The Biology of Belief when it first came out. Table of Contents & Chapter 1 | Download Chapter 1 (PDF) | Buy Now in Our Online Store | More Order Options Families and Parenting Urban Institute experts study public policies' effects on families and parents. We analyze family-leave policies, public supports for families, and government policies aimed at strengthening marriage. Our Low-Income Working Families project explores the hardships of employed families struggling to make ends meet. A third of all families with children (13.4 million families) have incomes less than twice the federal poverty line. Featured Links Related Policy Centers Publications on Families and Parenting Educational Attainment and Earnings Inequality among US-Born Men: A Lifetime Perspective(Research Report) This report tracks the lifetime earnings of men born in the U.S. between 1940 and 1974, focusing on how earnings differences by educational attainment, age, and year of birth have evolved. Financial Burden of Medical Spending by State and the Implications of the 2014 Medicaid Expansions(Research Report) Do Financial Knowledge, Behavior, and Well-Being Differ by Gender?

PSYCH-K Centre International Bruce Lipton - The Biology of Belief : theshowpodcast.com Bruce Lipton - The Biology of Belief (Radio Interviews) - Cells and Identity - February 9, 2005 - Biology, Belief and Consciousness - May 14, 2005 - Genes, Cells & Belief - December 19, 2005 Bruce Lipton - Cells and Identity (February 9, 2005) "We are not automatons to our genes," enthused scientist and lecturer, Dr. Lipton said he had a scientific epiphany when he realized that the cell membrane was "an organic information chip" that reacted to the environment. Cells send out "protein antennas" unique to an individual person that receive signals from the outside, and thus, our identities are linked to an exterior "field of energy," he said. Run time: 2 hours, 11 minutes Audio codec: mp3, 48 kbps, 32 kHz, mono, cbr Bruce Lipton - Biology, Belief and Consciousness (May 14, 2005) Scientist and lecturer, Dr. As proof Lipton cited his own research, which showed a strong link between environment and the development of stem cells. Run time: 2 hours, 11 minutes Audio Bio Bruce H. Books

Early Childhood As researchers confirm that the early-childhood years are key to building a strong foundation for future educational success, HCZ has been bolstering its work with children and families in these critically important first years. Like all of HCZ’s programs, our early childhood programs provide their services free to the public, which is possible thanks to the generosity of people like you. Please consider making a donation today. The Baby College® The Baby College offers a nine-week parenting workshop to expectant parents and those raising a child up to three years old. Among other lessons, the workshops promote reading to children and verbal discipline over corporal punishment. Read more about The Baby College The Three Year Old Journey The Three-Year-Old Journey works with parents of children who have won the HCZ Promise Academy charter school lottery. The Get Ready for Pre-K program brings in new Gems students before the start of the school year. Harlem Gems®

Brain Pickings The Wisdom of Your Cells: How Your Beliefs Control Your Biology: Bruce H. Lipton: 9781591795223: Amazon.com: Books The Socioeconomics of Parenting | Wired Science  How much do the decisions of parents matter? Most parents believe that even the most mundane acts of parenting—from their choice of day care to their policy on videogames—can profoundly influence the success of their children. Kids are like wet clay, in this view, and we are the sculptors. Yet in tests measuring many traits, from intelligence to self-control, the power of the home environment pales in comparison to the power of genes and peer groups. A new paper suggests that both metaphors can be true. For a paper in Psychological Science, researchers at the University of Texas at Austin and the University of Virginia looked at 750 pairs of American twins who were given a test of mental ability at the age of 10 months and then again at the age of 2. When it came to the mental ability of 10-month-olds, the home environment was the key variable, across every socioeconomic class. The opposite pattern appeared in 2-year-olds from wealthy households.