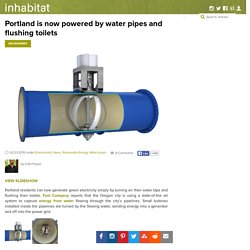 Fast Company reports that the Oregon city is using a state-of-the art system to capture energy from water flowing through the city’s pipelines. Small turbines installed inside the pipelines are turned by the flowing water, sending energy into a generator and off into the power grid. “It’s pretty rare to find a new source of energy where there’s no environmental impact,” Gregg Semler told Fast Company. Semler is the chief executive officer of Lucid Energy, the Portland start-up behind the new system.

“But this is inside a pipe, so no fish or endangered species are impacted. Related: New solar-powered invention can make sea water drinkable According to Semler, water utilities tend to use large amounts of electricity, so the new power generation system can help cut the cost of providing drinking water to cities. Via Fast Company +Lucid. Open311 – What is it, and why is it good news for both governments and citizens? The Internet has thrown up a host of challenges for governments, large and small. 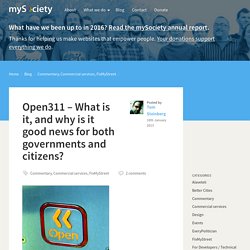 Most people are familiar with the problems presented by issues like hacking, but there is another challenge which probably worries local governments just as much. The challenge is this – how can a local government cheaply and efficiently cope with the fact that the public wants to request many services through a rapidly expanding plethora of different channels – phones, websites, email, apps, and Twitter? And how can it keep control of costs when new channels are being invented all the time?

The good news is there’s an answer that can prevent each new channel leading to ever-greater costs – a free technology called Open311. The bad news is not many people know it exists, let alone how to use it, or how it works. In this post, and two more to follow, we’ll explain how Open311 can help governments (and citizens), how it functions, and what mySociety is doing to make Open311 work a bit better. Why ‘311’? No. Do you wish to breathe life into an unused open space within your Glasgow neighbourhood? – The CSPA. 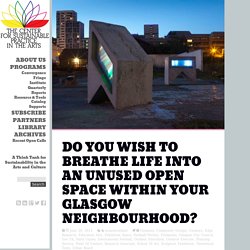 Funding is available from a minimum of £1,000 to a maximum of £2,500. Closing Date for applications: 27th of August. Proposals should follow the guidelines/criteria as laid out in the following link which also contains inspiring examples and a first point of contact for anyone who wishes to apply for funding: www.glasgow.gov.uk/stalledspaces Proposals must take place within the Glasgow City Council Boundary. HabitatMap. As We Build So Shall We Live - Raise the Hammer. As We Build So Shall We Live While it probably won't rid the world of greed, ethnocentrism and violence, building a nonviolent city that respects other life forms and celebrates human creativity and diversity is consistent with solving those problems. 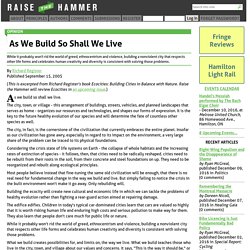 By Richard RegisterPublished September 15, 2005 (This is excerpted from Richard Register's book Ecocities: Building Cities in Balance with Nature. Raise the Hammer will review Ecocities in an upcoming issue.) As we build so shall we live. The city, town, or village - this arrangement of buildings, streets, vehicles, and planned landscapes that serves as home - organizes our resources and technologies, and shapes our forms of expression.

The city, in fact, is the cornerstone of the civilization that currently embraces the entire planet. How seven cities are inventing the future of transportation - Washington Post.