18-years-old model Bella Hadid became a new face of Samsung Mobile and she celebrated her new job at the tech brand’s pop up shop found in New York. 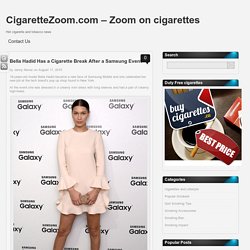 At the event she was dressed in a creamy mini dress with long sleeves and had a pair of creamy high-heels. However, the event took place after paparazzi caught her smoking a cigarette during a break. Beautiful girlfriend of singer The Weeknd does not wanted to be recognized and therefore she had a pair of aviator sunglasses. On the image you may see that she was dressed in black: black leggings, black&white jacket.

After meeting with his ex wife Jennifer Garner and their kids, Ben Affleck was spotted with a cigarette. 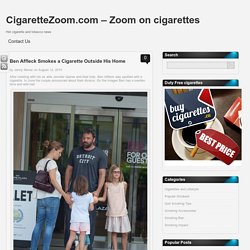 In June the couple announced about their divorce. On the images Ben has a swollen face and wild hair. 21-years-old Patrick Schwarzenegger revealed in one of his latest posts in social media that he is a big fan of actor Will Ferrell. 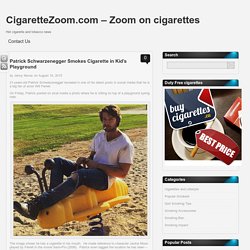 On Friday, Patrick posted on sical media a photo where he is sitting on top of a playground spring rider. The image shows he has a cigarette in his mouth. He made reference to character Jackie Moon played by Ferrell in the movie Semi-Pro (2008). Patrick even tagged the location he has been – Flint, Michigan. Namely in this place the comedy was made. He wrote the next caption for the photo: “Just met Jackie Moon at this park #tropics.” Actress Tara Reid, the star of the movie Sharknado, was caught recently by paparazzi. 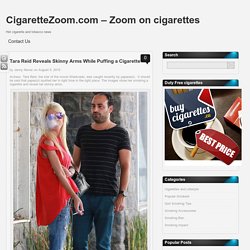 It should be said that paparzzi spotted her in right time in the right place. The images show her smoking a cigarette and reveal her skinny arms. The images are fresh! They were made just on Monday. Alicia Vikander and Eliot Sumner Enjoy a Smoking Break in Ischia. Swedish actress Alicia Vikander, 26, and English musicain Eliot Sumner (aka Coco), 24, are from different countries and belong to different worlds of cultures. 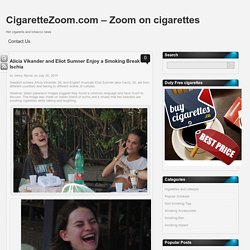 However, latest paparazzi images suggest they found a common language and have much to discuss. The image was made on Italian island of Ischia and it shows that two beauties are smoking cigarettes while talking and laughting. Eliot Sumner. Actress Helen Flanagan at the and of June gave bith to a child and told she successfully quit smoking and will never start using cigarettes again. 24-year-old Helen smoked Davidoff Shape White cigarettes for several years and when she became pregnant shoe decided to quit for good. 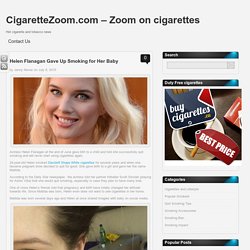 She gave birth to a girl and gave her the name Matilda. According to the Daily Star newspaper, the actress told her partner fotballer Scott Sinclair (playing for Aston Villa) that she would quit smoking, especially in case they plan to have many kids. One of close Helen’s friends told that pregnancy and birth have totally changed her attitude towards life.

Michael Douglas suffered from cancer and survived, and he blamed smoking in it. 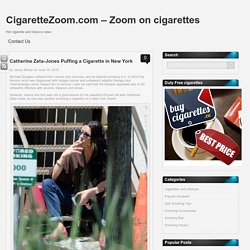 In 2010 the famous actor was diagnosed with tongue cancer and underwent adiation therapy and chemotherapy which helped him to recover. Later he said that the disease appeared due to his unhealthy lifestyle with alcohol, tobacco and stress. This week, a spokesman for Italian prime minister Matteo Renzi uploaded a photo on Instagram where it is seen clearly that Obama holds a pack of cigarettes in his hand. 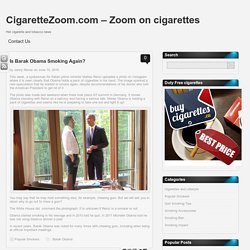 The image sparked a new speculation that he started to smoke again, despite recommendations of his doctor who told the American President to get rid of it. The photo was made last weekend when there took place G7 summit in Germany. Simon Cowell, 55, together with his girlfriend Lauren Silverman, 37, were participating in a charity ball last week on Wednesday. 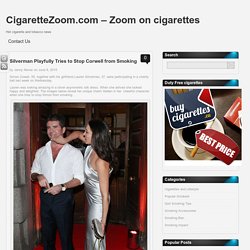 Lauren was looking amazing in a silver asymmetric silk dress. Manager of Real Madrid, Carlo Ancelotti, gave creadit to his players when they won the game with Espanyol, however, then faced a defeat in the game with Barcelona who became La Liga champions. 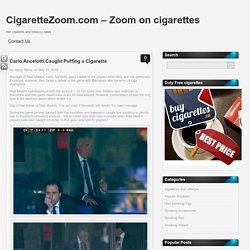 Real Madrid beat Espanyol with the score 4-1. At the same time Atletico was defected by Barcelona and this game determined rivals for Real Madrid. However, Lionel Messi kicked the only goal in the decisive game which ended 1-0. Due to the defeat of Real Madrid, it is not clear if Ancelotti will remain the team manager. In 1994 at the age of 18 Charlize Theron was a model and here are some black-and-white photos of that period of time. She is young, unknown and is not a superstar. The image reveal the beauty of her body in that black lingerie and show her rebellious spirit. She looks quite pawky with that cigarette in her mouth. She has dark hair and dark make-up. And this mole makes her just sexy. Seems like actress Kristen Stewart does not want to kick her smoking habit as she was caught again with a cigarette.

Paparazzi photographed her last Friday outside a studio in Los Angeles where she was standing with her friend and both were enjoying smoking. Kristen is not ashamed at all about her norious habit because she flashed a thumbs-up before going inside the building. Kristen had a sporty look. Latest photos of actress Charlize Theron prove that she is looking very beautiful at her 39 years old. She is looking hotter than ever. Charlize covers the May issue of M Magazine. The 55-year-old Simon Cowell wanted to stop smoking, but his attempt failed and he started to smoke again. More than one year ago he said he wants to quit because his girlfriend Lauren Silverman is pregnant. Now his baby Eric is 14 month old and Simon is still smoking. Yeah, this is an addiction and it is not so easy to get rid of it. The ‘X Factor’ superstar confessed that he underwent hypnotherapy in his attempt to kick the habit, but it did not help him and he smoked cigarettes right after leaving the session.

He told: ”I tried once to give up smoking, and the first thing I did when I walked out of the hypnotist’s was light up a cigarette. During the reality TV show ‘Britain’s Got Talent’ Simon was hypnotized by a dog and he told in an interview to The Sun newspaper he experienced a strange feeling. Lady Gaga received an engagement ring and accepted marriage proposal from her long-term boyfriend Taylor Kinney on Valentine’s Day. They became lovers four years ago when the actor starred in her You and I music video. Seems like she already started preparations for the wedding as recently paparzzi photographed her in Malibu, where she was probably looking for a best wedding location. The singer of the popular song Bad Roamce was spotted smoking a cigarette as she stood outside the West Beach Club, that is a luxury place for such an event as wedding since here opens an amazing view on the ocean. Salma Hayek several years ago told about her plan to quit smoking for good, but seems like she started smoking again.

Recently there have started filmings for the new movie called Far From The Madding Crowd by the novel of Thomas Hardy written in 1874. However, it seems that Tom Sturridge together with Juno Temple do already feel stress during filmings as they often smoke cigarettes when having a break. Taking a break from filming Tom, who plays Sergeant Troy, and Juno, who plays Fanny Robin, in the movie were seen puffing away while still in costume. Kurt Kobain) "Smoking is a dirty habit.It’s a dirty habit for a...) Colin Farrell) Romy Schneider) Frolicsome Smoke. Brad Pitt Portrait Using Cigarette Ash. Fans of Brad Pitt may enjoy in London’s Ripley’s Believe It Or Not a very unusual actor’s portrait made by Brad from cigarette ashes. These days Ripley’s Believe It Or Not is one of most popular tourist attractions and there is found many other unusual paintings along with this one of Brad Pitt. For example, Barack Obama’s portrait is created from the words of his inaugural speech. The portrait of his wife Michelle Obama is created from over 2,000 bottle tops.