A Good Man is Hard to Find 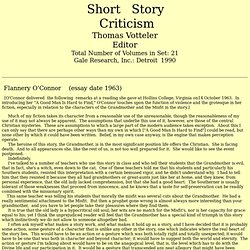 Much of my fiction takes its character from a reasonable use of the unreasonable, though the reasonableness of my use of it may not always be apparent. Flannery O'Connor, "On Her Own Work," in her Mystery and Manners: Occasional Prose, edited by Sally Fitzgerald and Robert Fitzgerald, Farrar, Straus and Giroux, 1969, pp. 107-18. Flannery O'Connor's "A Good Man is Hard to Find": Who's the Real Misfit? Activity 1. 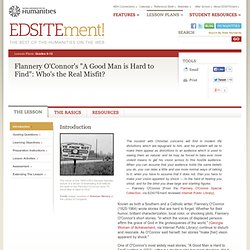 Warming Up the Car Before discussing the text in class, students should read Flannery O'Connor's "A Good Man is Hard to Find", preferably at home (the e-text is available via the EDSITEment-reviewed American Studies at the University of Virginia). Ask students to write a one-page response paper after they complete the story. Mention to students that each response paper should be informal; in it, students should comment on their immediate reaction to the story (especially the ending). Ask students to bring their response papers to the class period assigned to this lesson. 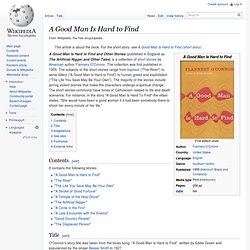 The collection was first published in 1955. The subjects of the short stories range from baptism ("The River") to serial killers ("A Good Man Is Hard to Find") to human greed and exploitation ("The Life You Save May Be Your Own"). The majority of the stories include jarring violent scenes that make the characters undergo a spiritual change. 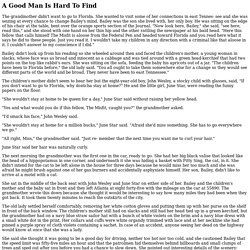 She wanted to visit some of her connections in east Tennes- see and she was seizing at every chance to change Bailey's mind. Bailey was the son she lived with, her only boy. He was sitting on the edge of his chair at the table, bent over the orange sports section of the Journal. "Now look here, Bailey," she said, "see here, read this," and she stood with one hand on her thin hip and the other rattling the newspaper at his bald head. "Here this fellow that calls himself The Misfit is aloose from the Federal Pen and headed toward Florida and you read here what it says he did to these people.

Bailey didn't look up from his reading so she wheeled around then and faced the children's mother, a young woman in slacks, whose face was as broad and innocent as a cabbage and was tied around with a green head-kerchief that had two points on the top like rabbit's ears. "Yes and what would you do if this fellow, The Misfit, caught you? " "Hey! " "Hush! "