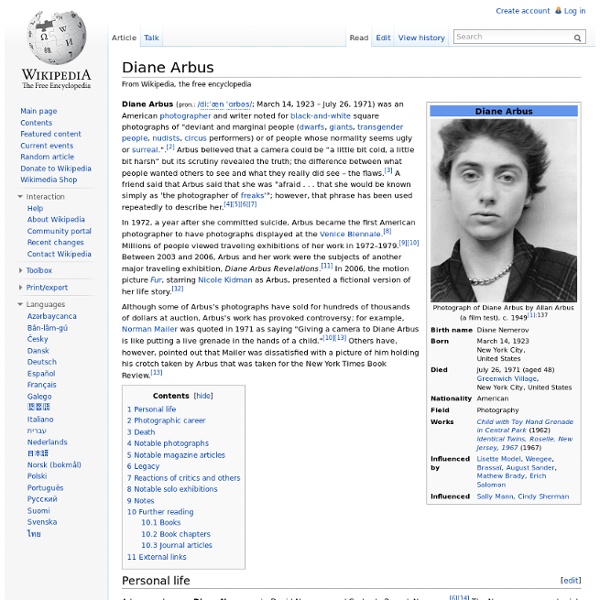 Diane Arbus (/diːˈæn ˈɑrbəs/; March 14, 1923 – July 26, 1971) was an American photographer and writer noted for black-and-white square photographs of "deviant and marginal people (dwarfs, giants, transgender people, nudists, circus performers) or of people whose normality seems ugly or surreal".[2] Arbus believed that a camera could be "a little bit cold, a little bit harsh" but its scrutiny revealed the truth; the difference between what people wanted others to see and what they really did see – the flaws.[3] A friend said that Arbus said that she was "afraid ... that she would be known simply as 'the photographer of freaks'", and that phrase has been used repeatedly to describe her.[4][5][6][7] Personal life[edit] Diane and Allan Arbus separated in 1958, and were divorced in 1969.[15] Photographic career[edit] Death[edit] Notable photographs[edit] Eddie Carmel, Jewish Giant, taken at Home with His Parents in the Bronx, New York, 1970 Arbus's most well-known individual photographs include:

Diane Arbus Diane Arbus was born, to a wealthy Jewish family, in 1923. David Nemerov, her father, was the hard-working son of a Russian immigrant; her mother Gertrude was the daughter of the owners of Russek's Fur Store. After the marriage, David helped manage Russek's, and oversaw its transformation into a department store, Russek's of Fifth Avenue, which specialized in furs. His interest, however, was in women's clothing, and he was said to have an extraordinary intuition for what the next trend in women's fashion would be.

Hare Psychopathy Checklist - Geeks' Lounge I scored 19 :) With this test someone can find out if he/she has psychopatic tendensies. Do the Psychopathy Checklist yourself here: Note: between 30 and 40 means you're in high risc of becoming (or already are) a psychopath. Eugène Atget Organ Grinder (1898) Eugène Atget (12 February 1857 – 4 August 1927) was a French flaneur[1] and a pioneer of documentary photography, noted for his determination to document all of the architecture and street scenes of Paris before their disappearance to modernization.[1] Most of his photographs were first published by Berenice Abbott after his death.[2] An inspiration for the surrealists and other artists, his genius was only recognized by a handful of young artists in the last two years of his life, and he did not live to see the wide acclaim his work would eventually receive.[2] Biography[edit] Atget's birthplace in Libourne (France)

Belgrade Raw—A non-profit using photography to explore different social and urban layers of Belgrade, capitol of Serbia. We are a non-profit focused on Belgrade – exploring social and urban aspects of life in the city, as well as our personal perceptions, using photography. We look at the streets, ordinary and extraordinary people, places and events that, in our belief, reflect the true look and feel of our city. Our primary medium for communication with the public is Internet.

10 of Art History's Most Controversial Photographers [NSFW] In 1971 Norman Mailer said that “giving a camera to Diane Arbus is like putting a live grenade in the hands of a child.” Lo and behold: Child With Hand Grenade. Even before her suicide that year, Arbus’ magnificent body of work evoked criticism and suspicion of exploitation. DIANE ARBUS: "Flirt, Flash & Mirror" (2013) A husband and wife in the woods at a nudist camp, N.J., 1963 By Anna Solal Translated by Chris Farmer, 2013 I saw this show a few months ago in Berlin but it took some time to fully digest it. This dense retrospective of Diane Arbus’ photographs is a fine occasion for the appreciation of her work.

Straight edge A straight edge tattoo. Straight edge emerged amid the mid-1980s hardcore punk scene. Since then, a wide variety of beliefs and ideas have been associated with some members of the movement, including vegetarianism, animal rights,[4] and Christianity.[5] While the commonly expressed aspects of the straight edge subculture have been abstinence of alcohol, nicotine, and illegal drugs, there have been considerable variations on how far to take the interpretations of "abstaining from intoxicants" or "living drug free." Eugène Atget. (French, 1857-1927) French photographer. An only child of working-class parents, he was orphaned at an early age and went to sea. Determined to be an actor, he managed to study at the Conservatoire d’Art Dramatique in Paris for a year but was dismissed to finish his military service. Thereafter he acted for several seasons in the provinces but failed to distinguish himself and left the stage.