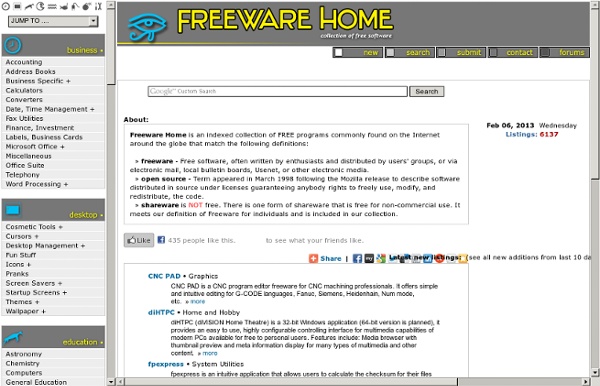 Security & Privacy Anti-Spam SMTP Proxy (assp) 1.3Anti-Spam SMTP Proxy (ASSP) is an open source anti-spam solution that utilizes advanced as well as more common ways to avoid spam. ASSP also takes care of email transferred viruses. Being a server... Read more BleachBit BleachBit is an application that frees disk space and guards your privacy. It cleans the cache, clears internet history, deletes cookies and logs, shreds temporary files and gets rid of junk that... Clam AntiVirus 0.93Clam AntiVirus is a GPL anti-virus toolkit for UNIX. ClamWin 0.93ClamWin is a Free Antivirus for Microsoft Windows 98/Me/2000/XP/2003. FreeOTFE 4.71FreeOTFE (on the fly encryption) is an open source tool for safe-keeping of your files through encryption. GNU Privacy Guard 2.0GnuPG is a command line tool mainly used by other applications to meet encryption demands. KeePass 2KeePass is an open source password manager. Winpooch 0.6.6Winpooch is open source protection from spyware and the like.

VirtualBox Store Details - Microsoft Store Shop. Learn. Have fun. Our store associates are here to help. Visit us at: Inside your Microsoft Store Pioneer Place Not your store? Location Get directions Pioneer Place 300 Yamhill St. Where to find us Located Street Level on Third Avenue and Yamhill Street, next to Tiffany & Co. Schedule an appointment Find or cancel an appointment Monday, April 289:00 AM 12:00 PM 1:00 PM 2:00 PM Monday, April 28 (cont.)4:00 PM 5:00 PM Tuesday, April 2912:00 PM 1:00 PM The best of Microsoft all in one place: Windows Windows Phone Office Xbox Free Portable Software USB Flash Drive Applications | Pendriveapps The 150 Best Online Flash Games It was a long and exhausting task: playing hundreds of online games for hours in a row, day after day. It was hard, but someone had to do it. The result is the list that you will find below. Enjoy! Action Games 1. As you probably guessed, on this game, you get to drive an indestructible tank around. Click here to play IndestructoTank 2. A fighting game where you need to beat down several opponents at the same time. Click here to play Electricman2HS 3. Think about Sonic the Hedgehog with a more clean design and some physics effects added. 4. On this game you play a small dinosaur that is trying to escape the imminent extinction from a fallen meteor. Click here to play Dino Run 5. The Matrix fans out there will have fun with this one. Click here to play Matrix Rampage 6. The Gooples are all around you. Click here to play Amorphous+ 7. Ever wanted to fly around like Spider Man? Click here to play Double Wires 8. We couldn’t leave ninja games out of the list, right? Click here to play Final Ninja

Zen 2 might not offer the IPC increase you expect Opinion: Across all sorts of tech forums, and particularly in TechSpot’s comment section, I’ve noticed a trend. Everyone loves to quote a 10-20% IPC (instructions per clock) boost for Zen 2, and, while I’m not ruling that out, I think it’s much less likely than what many people believe. That range has only come about because of a series of misunderstandings, errors, and easily refutable leaks, so I’m going to try to set the record straight. Rumors kicked off six months ago when an Italian computer company with a 32-core Epyc sample told Bits and Chips that Zen 2 offered a 13% IPC performance boost in scientific tasks. For starters, scientific tasks benchmark wildly differently to games – AMD already beats Intel in scientific and productivity IPC, while falling ~3% behind in games clock for clock. More importantly, using a 32-core server processor as a metric for an 8-core consumer processor is fraught with error. I believe that a 10-20% increase is possible, but only as likely as 5-10%.

PortableApps.com - Portable software for USB, portable and cloud drives The UK and Huawei, Theresa May and the leaking scapegoat This week, the news broke that Defense Secretary Gavin Williamson had been identified as the source of a leak from the National Security Council, and had been fired from the government. The BBC reported on Theresa May’s decision to axe her Defense Secretary of 18 months having found “compelling evidence suggesting [his] responsibility for the unauthorized disclosure.” Subsequent to his sacking, and facing calls for a full inquiry into what happened, the Prime Minister’s de facto deputy, David Lidington, has said “the PM considered the matter closed.” But this matter is far from closed. Mr Williamson denies that he leaked anything, and said in his response letter to the PM, “I strenuously deny that I was in any way involved in this leak and I am confident that a thorough and formal inquiry would have vindicated my position.” He continued, “I have always trusted my civil servants, military advisers and staff. This is a situation that needs some close examination. Gavin Williamson