What Orgonite Is And How It Works. The word "Orgonite" refers to a new class of materials which are composed of a mixture of metallic particles suspended in an organic medium. 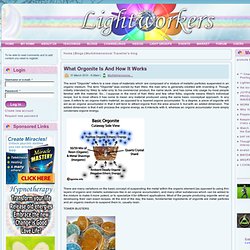 The term "Orgonite" was coined by Karl Welz, the man who is generally credited with inventing it. Though initially intended by Welz to refer only to his commercial product, the name stuck- and has come into usage by most people familiar with the material. So... I suppose in the mind of Karl Welz and few other folks, orgonite means Welz's individual recipe, but to most others it has come to mean any material produced using the same basic conceptual approach. In any case, it refers to an orgone matrix material, as opposed to a layered orgone accumulator.

A wide range of metaphysical and radionics disciplines all work with the same energy, know it by various names ... Here’s a little about how Orgone Matrix Material works: These devices are not like the old orgone accumulators, which accumulate orgone, irrespective of it being negative or positive. Orgonite Information. It is clear to me that orgonite does have a positive effect on the human body, both physically and energetically. 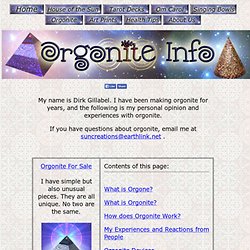 Armored energy structures can also be created by physical traumatic events, like a violent death, or sustained emotional abuse in a house. These negative energy structures can hang around for a very long time. Placing an energy device in or on such a spot will clear up the place. Orgonite will also remove negative entities from a house. Negative entities are often characterized by their tendencies of imposing their will upon the living, for example out of anger, or by wanting to control the occupants of the house, and often they feed of the life force of the living. My experiences and Reactions from People My first orgonite device had a two gallon base of orgonite with standing metal pipes anchored in it.

When I put my Harmonizer in my garden, I noticed that the environment gradually changed for the better. Once one of our friends who has psychic gifts, came by. Orgonite.info - Orgonite Information, Links and Resources. Orgonite Uses. Orgone tools can be used to create a positive etheric environment for sentient beings to thrive and evolve in. 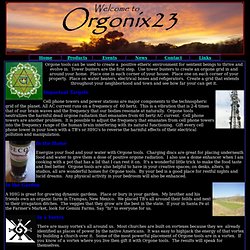 Tower busters are the first step. Use tower busters to create an orgone grid in and around your home. Place one in each corner of your house. Place one on each corner of your property. Place on water heaters, electrical boxes and refigerators. Important Targets Cell phone towers and power stations are major components to the technospheric grid of the planet. In the Home Energize your food and your water with Orgone tools. In the Garden. Orgone et Orgonite - Joel Fleury - Accueil. Visibles effect of orgone generator on ice- Experience made by member of warriormatrix.com New test made with tap water Picture of frozen water in cloud-buster pipe. 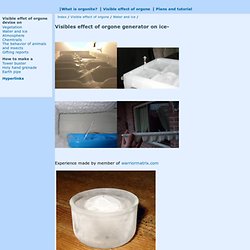 Try for yourself! This experience can easily be reproduced, all you need is distillied water, ice cube molds, a freezer and a few orgone devise. freeze an ice cube mold with nothing on top of the freezer, observe the result then repeat with some hhg on top of the freezer and notice the difference. Www.orgoknight.com/resources/an introduction to Orgone matrix material.pdf. Save The Bees with Orgonite. Bees. Crystals Gems » Crystal grids. Crystal grids are purposeful and specialized crystal placements corresponding to a systematic pattern, utilizing several crystals at least. 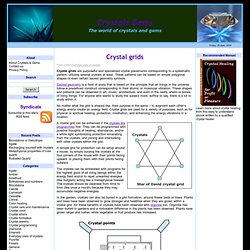 These patterns can be based on simple polygonal shapes or even certain sacred geometry symbols. Sacred geometry is a field of study that is based on the principle that all things in the universe follow a predefined construct corresponding to their atomic or molecular vibration. These shapes and patterns can be observed in art, music, architecture, and even in the nests, shells or bones of living things. For anyone who wants to study the subject more, suffice to say, there is a lot to study within it. No matter what the grid is shaped like, their purpose is the same – to augment each other’s energy and/or create an energy field. A crystal grid can be enhanced if the crystals are programmed first. In the garden, crystals can also be buried in a grid formation, around flower beds or trees.