Awk - A Tutorial and Introduction - by Bruce Barnett 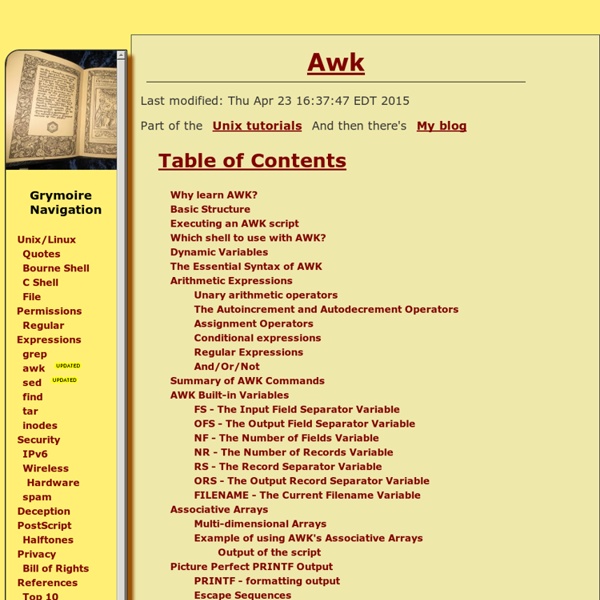 Your browser does not have Javascript enabled. I use Javascript for analytics, and to show ads which pay for the maintenance Last modified: Thu Apr 23 16:37:47 EDT 2015 Part of the Unix tutorials And then there's My blog Table of Contents Copyright 1994,1995 Bruce Barnett and General Electric Company Copyright 2001, 2004, 2013, 2014 Bruce Barnett All rights reserved You are allowed to print copies of this tutorial for your personal use, and link to this page, but you are not allowed to make electronic copies, or redistribute this tutorial in any form without permission. Original version written in 1994 and published in the Sun Observer Awk is an extremely versatile programming language for working on files. The examples given below have the extensions of the executing script as part of the filename. Why learn AWK? In the past I have covered grep and sed. AWK - the (very old) original from AT&T NAWK - A newer, improved version from AT&T GAWK - The Free Software foundation's version Basic Structure

Awk Introduction Tutorial – 7 Awk Print Examples This is the first article on the new awk tutorial series. We’ll be posting several articles on awk in the upcoming weeks that will cover all features of awk with practical examples. In this article, let us review the fundamental awk working methodology along with 7 practical awk print examples.Note: Make sure you review our earlier Sed Tutorial Series. Awk Introduction and Printing Operations Awk is a programming language which allows easy manipulation of structured data and the generation of formatted reports. KSH script BASICS Contents Principle of ScriptVariablesBranchingLoopingCommandline ArgumentsComparisonsVariable ManipulationsKsh Regular ExpressionsFunctionsData RedirectionPipesCoprocessesRead Input from User and from FilesSpecial VariablesAction on Success or Failure of a CommandTrivial CalculationsNumerical Calculations using "bc""grep""sed""awk""perl" Principle of Script Defining the Shell Type To make a ksh script (which is a ksh program) crate a new file with a starting line like:#!

The AWK Manual - Table of Contents Edition 1.0 December 1995 This file documents awk, a program that you can use to select particular records in a file and perform operations upon them. Features/HTTPS Version: 2.5 More: RFC 2817 When a browser comes across an URL, it does one of two things: opens an SSL/TLS connection directly to the origin server or opens a TCP tunnel through Squid to the origin server using the CONNECT request method.

ConfigExamples/Reverse/SslWithWildcardCertifiate Warning: Any example presented here is provided "as-is" with no support or guarantee of suitability. If you have any further questions about these examples please email the squid-users mailing list. Outline Squid can be configured as a reverse proxy terminating HTTPS from clients and relayig it to backend servers which can be either HTTP or HTTPS themselves. Chapter 11 The awk Programming Language Chapter 11 The awk Programming Language Contents:Conceptual OverviewCommand-Line SyntaxPatterns and ProceduresBuilt-in VariablesOperatorsVariables and Array AssignmentsUser-Defined FunctionsGroup Listing of awk Functions and CommandsImplementation LimitsAlphabetical Summary of Functions and Commands 11.1 Conceptual Overview awk is a pattern-matching program for processing files, especially when they are databases. The new version of awk, called nawk, provides additional capabilities.[1] Every modern Unix system comes with a version of new awk, and its use is recommended over old awk. [1] It really isn't so new. The additional features were added in 1984, and it was first shipped with System V Release 3.1 in 1987. Nevertheless, the name was never changed on most systems.

Main / Handbook3-1 Per Lidén wrote this handbook. RobertMcMeekin converted it to DocBook, the CRUX team made a Wiki version. Numerous others have given feedback and improvement suggestions. Linux Documentation 1. An intro to the great language with the strange name In defense of awk

TipsAndTricks (see also FAQ, HOWTOs, CategoryTipsAndTricks) 1. Undo an '`hg add`' The GNU Awk User's Guide The GNU Awk User's Guide 6.3.2 Assigning Variables on the Command Line Any awk variable can be set by including a variable assignment among the arguments on the command line when awk is invoked (see section Other Command-Line Arguments). Such an assignment has the following form: Building LLVM with CMake — LLVM 3.6 documentation Introduction CMake is a cross-platform build-generator tool. CMake does not build the project, it generates the files needed by your build tool (GNU make, Visual Studio, etc) for building LLVM. If you are really anxious about getting a functional LLVM build, go to the Quick start section.