Complex systems science allows us to see new paths forward. We’re at a unique moment in the 200,000 years or so that Homo sapiens have walked the Earth. 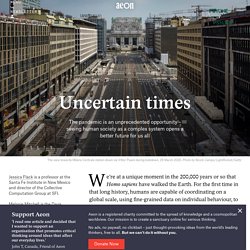 For the first time in that long history, humans are capable of coordinating on a global scale, using fine-grained data on individual behaviour, to design robust and adaptable social systems. The pandemic of 2019-20 has brought home this potential. Never before has there been a collective, empirically informed response of the magnitude that COVID-19 has demanded. Yes, the response has been ambivalent, uneven and chaotic – we are fumbling in low light, but it’s the low light of dawn.

At this historical juncture, we should acknowledge and exploit the fact we live in a complex system – a system with many interacting agents, whose collective behaviour is usually hard to predict. In complex systems, the last thing that happened is almost never informative about what’s coming next. Updates on everything new at Aeon. Think of hundreds of fireflies flashing together on a summer’s evening.

White Paper: Pragmatic Randomized Trials: Considerations for Design and Implementation - Evidera. One of the challenges of designing effective PRTs is the choice of outcomes and endpoints. 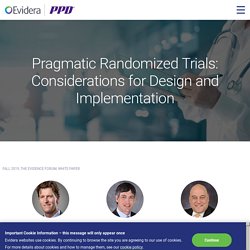 The term outcome is used here to mean a measured variable or event of interest (e.g., time to first occurrence of a composite outcome such as myocardial infarction [MI], stroke, or cardiovascular death, which collectively are referred to as major adverse cardiovascular events [MACE]), whereas an endpoint refers to an analyzed parameter that is expected to change over time as a result of an intervention (e.g., change in LDL-C from baseline).

For a PRT to meet the requirements of both regulators and payers, it is important that the selected endpoints and outcome measures resonate with key stakeholders (patients, payers, regulators, and healthcare providers), and be defined with sufficient sensitivity (typically more important for safety) and specificity (typically more important for effectiveness estimates) to translate the trial objectives into precise definitions of treatment effect. The Complexity and Artificial Life Research Concept for Self-Organizing Systems. Fallacy of systems thinking and reversing the productivity game. The problem with productivity enthusiasts these days, is that they will pay more attention to the hacks and tricks, than doing the actual work. 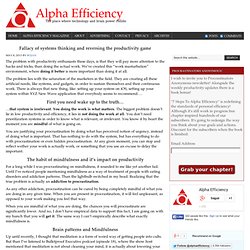 We’ve created this “work masturbation” environment, where doing it better is more important than doing it at all. The problem lies with the saturation of the marketers in the field. They are creating all these artificial needs, like systems, and gadgets, in order to sustain themselves and their continuous work. There is always that new thing, like: setting up your system on iOS, setting up your system within XYZ New Wave application that everybody seems to recommend…. First you need wake up to the truth… …that system is irrelevant. You are justifying your procrastination by doing what has perceived notion of urgency, instead of doing what is important. The habit of mindfulness and it’s impact on productivity For a long while I was procrastinating on mindfulness, it sounded to me like yet another fad.

Brain patterns and Mindfulness. Why I don’t agree that systems thinking is a ‘fallacy’ It’s been some time since I wrote my counterpoint to Bojan’s article on quitting GTD, and in that time I’ve come to know him a great deal better, to respect his opinion, and I consider him a friend. 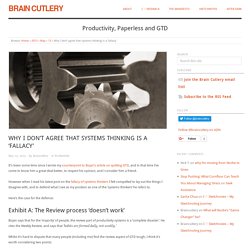 However when I read his latest post on the fallacy of systems thinkers I felt compelled to lay out the things I disagree with, and to defend what I see as my position as one of the ‘systems thinkers’ he refers to. Here’s the case for the defence: Exhibit A: The Review process ‘doesn’t work’ Bojan says that for the ‘majority’ of people, the review part of productivity systems is a ‘complete disaster’. He cites the Weekly Review, and says that ‘habits are formed daily, not weekly.’ Whilst it’s hard to dispute that many people (including me) find the review aspect of GTD tough, I think it’s worth considering two points: 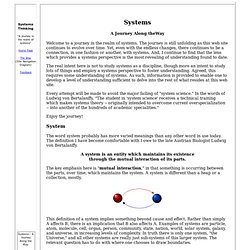 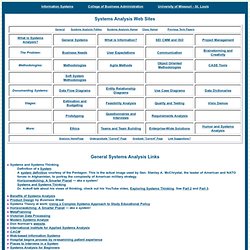 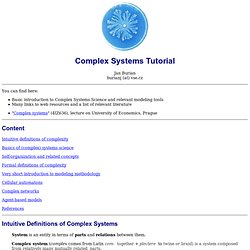