China Ruling Bitcoin is Property Again Is ‘Major Milestone,’ Says Investor. Bitcoin (BTC) has gained legal recognition by a second Chinese court in a further boost for the cryptocurrency in one of its harshest environments. 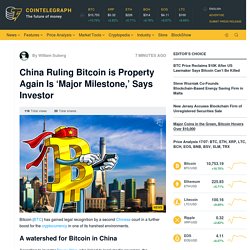 A watershed for Bitcoin in China According to investor Dovey Wan, who linked to local media coverage, the Hangzhou Internet Court formally described Bitcoin as virtual property on July 18. The trade war is already pushing businesses out of China—and it could be permanent. Huawei admits it screwed up after putting ads on people's lock screens. Chinese firms' missing $6 billion tests regulators' resolve. SHANGHAI/SINGAPORE (May 17): Cash is considered among the hardest assets for a company to fake, which is why the disappearance of a combined $6.1 billion from two Chinese companies has dumbfounded investors and forced regulators to take action. 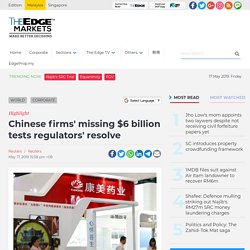 Drugmaker Kangmei Pharmaceutical Co Ltd, a constituent of MSCI’s global indexes, in April said an “accounting error” led it to overstate cash in 2017 by 29.94 billion yuan ($4.4 billion). This month, Kangde Xin Composite Material Group Co Ltd, a producer of high-polymer materials, said its auditor could find no trace of the 12.21 billion yuan that it said it held in a bank deposit. Regulators are investigating both cases and neither company has offered detailed explanations for the missing billions. Weak governance has long been a black mark against mainland Chinese companies. Malaysia Cannot Escape From China. © 2018 Bloomberg Finance LP Malaysia is already caught in China’s web, and there’s no escape from it. 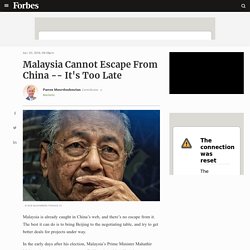 The best it can do is to bring Beijing to the negotiating table, and try to get better deals for projects under way. In the early days after his election, Malaysia’s Prime Minister Mahathir Mohamad sent a strong message to Beijing about his will and determination to control the destiny of Malaysia by canceling high profile Chinese projects in the country. Apparently, he wanted Malaysia to avoid China’s debt trap, which has left countries like Sri Lanka with no choice but to cede control of indebted projects to Beijing.

China Is Scared Of Something. Asia's richest take hit with US$137b in losses in 2018, Business News. HONG KONG (BLOOMBERG) - The world's fastest growing source of mega-wealth hit a speed bump this year. 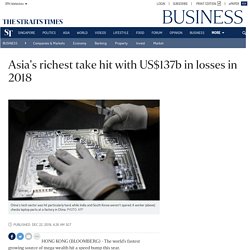 The 128 people in Asia with enough money to crack the 500-member Bloomberg Billionaires Index lost a combined US$137 billion (S$187 billion) in 2018, the first time wealth in the region has dropped since the ranking started in 2012. Global trade tensions and concerns that stock valuations are too frothy hammered some of the area's biggest fortunes. China's tech sector was hit particularly hard, while India and South Korea weren't spared. The declines occurred even as banks and money managers aggressively stepped up efforts to cater to Asia's richest.

Asian equities retreated again on Friday (Dec 21), with benchmarks slipping in Japan, China and Australia. The Dirty Legacy of China’s and India’s Growth. The sixth-biggest cause of death globally is small-particle pollution, chemical specks that enter the lungs and can contribute to cardiovascular diseases, lung cancer, and infections. 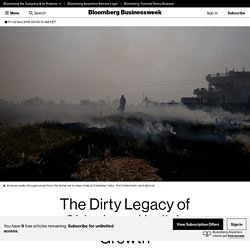 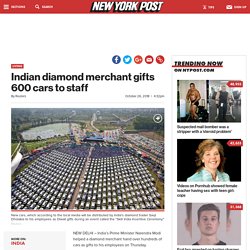 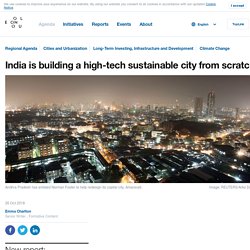 The $600 billion reason why China's stock market crash might get a whole lot worse. Perhaps the biggest financial market story in 2018 so far is the colossal fall from grace of the Chinese stock market, which has witnessed losses in excess of 30% since the start of the year. 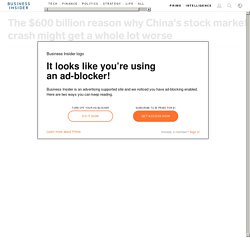 The fall, which has seen the benchmark Shanghai Composite index drop to its lowest level in almost four years this week, is generally explained through the prism of investors realising that the blockbuster growth China has enjoyed over the last decade is on the wane, and that things are likely to slow down to a strong, but not stellar, rate. Such a view has been exacerbated by the rise of the trade conflict between the US and China, which has seen the world's two largest economies exchange tit-for-tat tariffs, which now apply to goods totalling close to a cumulative $300 billion. Many economists see the trade war having a major negative impact on Chinese growth, with JPMorgan earlier in October saying a full-blown trade war could have a 1% shrinking effect on the economy.

Why Trump’s trade war could be the tipping point for American manufacturing. Study proposes creation of North-East Corridor. Highlights potential of connectivity projects between India and Eastern neighbours Kolkata, June 25: An A.T. 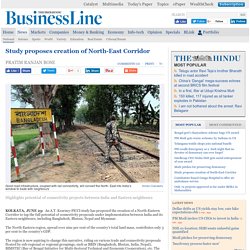 Kearney-FICCI study has proposed the creation of a North-Eastern Corridor to tap the full potential of connectivity proposals under implementation between India and its Eastern neighbours, including Bangladesh, Bhutan, Nepal and Myanmar. The North-Eastern region, spread over nine per cent of the country’s total land mass, contributes only 3 per cent to the country’s GDP. The region is now aspiring to change this narrative, riding on various trade and connectivity proposals floated by sub-regional or regional groupings, such as BBIN (Bangladesh, Bhutan, India, Nepal), BIMSTEC (Bay of Bengal Initiative for Multi-Sectoral Technical and Economic Cooperation), etc.

India is building two road corridors stretching over 7,300 km connecting the length and breadth of the country. Commentary: An Asia for Asians, the birth of a multipolar Asia? LONDON: In 2014, Chinese President Xi Jinping called for an “Asia for Asians” as part of a proposed “Asian Security Concept”. 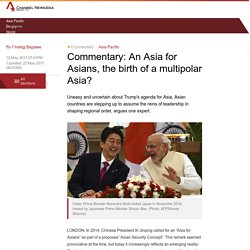 India To Indonesia, Asia's Top 5 Countries For Foreign Investors. The centrepieces and setbacks along China’s new Silk Road. Three continents, 60-plus countries and 30 per cent of the world’s gross domestic product – on the surface the numbers of China’s “Belt and Road Initiative” sound impressive.