Zo worden sociale media weer van ons. 'Stressed' millennials are setting the agenda at work. A snowflake millennial is tougher than you think, especially in the workplace. 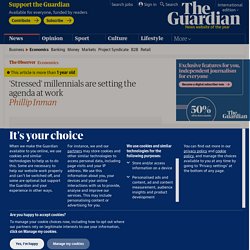 They have watched their parents cope with an increasingly insecure jobs market since the turn of the century and in growing numbers told their friends and family that long hours, short term contracts and a shouty boss is not for them. They don’t join trade unions or argue with the boss about a pay rise, though some do. Their confidence – however much they appear to quiver and quake – gives them the steel to quit and search for a different job that comes – they hope – without the debilitating stress that wrecks everyone’s physical and mental health. Hoping for a return to normal after Trump? That's the last thing we need. Normalcy and the restoration of a modicum of decorum to the White House: that is what many elite supporters of Joe Biden hope for now that he has won the election. 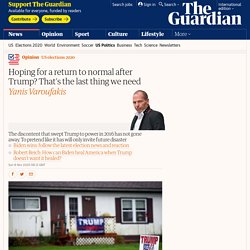 But the rest of us are turned off by this meagre ambition. Voters who loathe Trump celebrate his loss, but the majority rue the return to what used to pass as normal or ethical. Nora Bateson - News from the Warm Data realm... I don't...

What a City-Sized Sharing Economy Looks Like. In one of the key early exercises, each community’s council and staff, along with Indigenous elders, are asked to outline their own understanding of the region’s history through sticky notes on the wall. 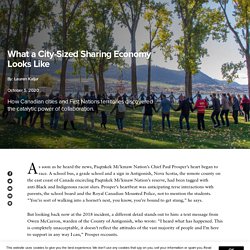 Regnier describes one regional partnership where the municipalities outlined a laundry list of infrastructure: town hall, school, fire hall. The First Nations, at their turn, outlined a much longer timeline of teachings, cultural history, and relationships and wars with other Nations. At the end of their timeline came a turning point, a nation-to-nation treaty signed with colonial governments, followed by a tight succession of painful events: the Indian Act defined Indigenous rights and identities, residential schools removed youth from their parents, the last fluent language-speaker passed. Global dissatisfaction with democracy at a record high. Dissatisfaction with democratic politics among citizens of developed* countries has increased from a third to half of all individuals over the last quarter of a century, according to the largest dataset ever created on global attitudes to democracy. 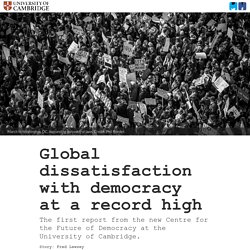 In fact, researchers found that across the planet – from Europe to Africa, as well as Asia, Australasia, both Americas and the Middle East – the share of individuals who say they are “dissatisfied” with democracy has jumped significantly since the mid-1990s: from 47.9% to 57.5%. Radical Visions of Future Government final. Why ‘the will of the people’ is a myth in British democracy. They promised sovereignty, but at first it was unclear which variety of sovereignty they meant. 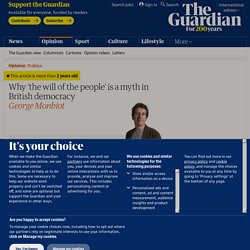 Were the politicians who swore we would regain it when we left the European Union referring to parliamentary or popular sovereignty? Now we know they didn’t mean parliamentary sovereignty. Boris Johnson’s government has sought to trick, rush, ignore and prorogue parliament at every turn. “People v parliament” is Johnson’s pitch to the nation. So where do the people come in? Representative democracy is a remarkably blunt instrument. I’ve often been asked, when I complain about a government policy, “So why don’t you stand for election?” I do not want to abandon representative democracy. Rory Stewart: Tories must rise above the Boris bluster and stick to the centre ground. The new Conservative Party may have a Trumpian flavour but it is not defined by Trumpian trash-talk. 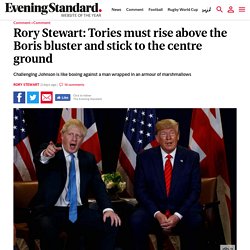 In fact, you have only to watch Boris Johnson or Jacob Rees-Mogg at the Conservative Party conference to see how polite they can be. It is like encountering a certain type of public-school boy in a pub — could such well-spoken men, so generous with spending, so concerned about nature, really have said what I thought they said? The death of democracy and birth of an unknown beast - Open Future. History provides uncomfortable lessons. 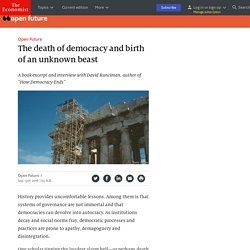 Among them is that systems of governance are not immortal and that democracies can devolve into autocracy. As institutions decay and social norms fray, democratic processes and practices are prone to apathy, demagoguery and disintegration. One scholar ringing the loudest alarm bell—or perhaps death knell—is David Runciman. He is a professor of politics at Cambridge University and the author of “How Democracy Ends”. Too much inequality impedes support for public goods. However, while too much inequality is harmful, the researchers also find that complete equality isn't always needed either, in order to bring about the greatest benefits to the public. 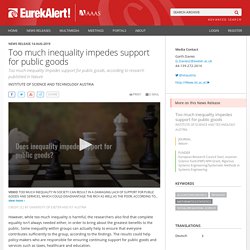 Some inequality within groups can actually help to ensure that everyone contributes sufficiently to the group, according to the findings. The results could help policy-makers who are responsible for ensuring continuing support for public goods and services such as taxes, healthcare and education. The research, including co-first authors Dr Oliver Hauser (University of Exeter) and Dr Christian Hilbe (IST Austria), developed a mathematical theory, which took into account to what extent people with differing incomes and productivities were able to cooperate with one another by measuring their willingness to contribute part of their income to the public good.

"To ensure our public goods are maintained we need to understand what impact inequality plays," said Dr Hauser. Disclaimer: AAAS and EurekAlert! Xi Jinping’s Quest to Dominate China. When Joe Biden met Xi Jinping in 2011, China’s leader in waiting hit the U.S. vice president with a volley of questions about U.S. politics. 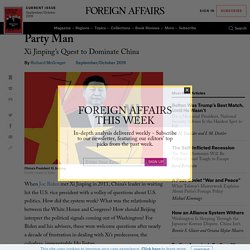 Puerto Rico: The Shift from Mass Protests to People’s Assemblies. A microphone sat in the center of a crowd under some trees in Plaza Las Delicias in Ponce, the largest city on the southern coast of Puerto Rico. 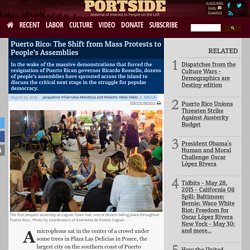 Blame Economists for the Mess We’re In. In the early 1950s, a young economist named Paul Volcker worked as a human calculator in an office deep inside the Federal Reserve Bank of New York. He crunched numbers for the people who made decisions, and he told his wife that he saw little chance of ever moving up. The central bank’s leadership included bankers, lawyers and an Iowa hog farmer, but not a single economist. The Fed’s chairman, a former stockbroker named William McChesney Martin, once told a visitor that he kept a small staff of economists in the basement of the Fed’s Washington headquarters. They were in the building, he said, because they asked good questions. They were in the basement because “they don’t know their own limitations.” There’s an idea that could transform Britain – but Brexit won’t let it be heard.

Against some stiff competition, one of the worst things about Brexit is the way it sucks up all the oxygen, consuming whatever political energy is available, until there’s none left for anything else. Why rich countries are seeing more poverty. Poverty isn’t just an issue for developing nations, with almost one child in every seven across the OECD living on extremely low income and the share rising in many countries.

While child deprivation isn’t new, its intensity has increased since the global financial crisis of the late 2000s, according to the Organisation for Economic Co-operation and Development. Rates rose in almost two-thirds of OECD countries after that period, with the share of children living below the pre-crisis poverty line sharply up in Greece, Italy and Spain. WEF 18: Oxfam says world’s richest 1% get 82% of the wealth. Just 42 people own the same amount of wealth as the poorest 50 percent worldwide, a new study by global charity Oxfam claimed. In a report published Monday, Oxfam called for action to tackle the growing gap between the super-rich and the rest of the world.

Approximately 82 percent of the money generated last year went to the richest 1 percent of the global population, the report said, while the poorest half saw no increase at all. The report is timely as the global political and business elite gathers in snow-clad Davos for the World Economic Forum’s annual meeting this week, which aims to promote responsive and responsible leadership. ‘Increasingly concentrated’ Oxfam said its figures, which some observers have criticized, showed economic rewards were “increasingly concentrated” at the top.

The charity also found the wealth of billionaires had increased by 13 percent a year on average in the decade from 2006 to 2015. Jeff Bezos. SAGE Books - Is Latin America Becoming Less Unequal? Luxembourg to scrap fares on all trains, trams and buses from 2020. Increasingly, inequality within, not across, countries is rising. During the second-half of the last century countries were placed in one of two mutually exclusive camps: north or south, east or west, advanced or emerging, developed or developing. Simple though this categorization of countries had been, it reflected prevailing realities. In 1970, for instance, the global distribution of per capita income showed a clear divide between richer and poorer countries (See Figures 1 and 2). Ikea surveyed thousands of people to design 6 homes of the future. How the media contributed to the migrant crisis. Meet generation Greta: young climate activists around the world.

The City of Europe’s Future. Protesters Fill Prague Square Again, in New Struggle for Country’s Soul. Mr. The Millennial Housing Trend Is a Repeat of the Middle Ages. Instead of limiting their households to children, parents, and grandparents, plenty of people are going a step further, making homes with friends and even strangers. Cohousing, in which a large community lives together and shares household duties, is gaining popularity. In cohousing, individuals or families generally have their own houses, bedrooms, or apartments but share things like kitchens and community spaces.

They’ll commonly trade off on responsibilities like cooking and chores. Milagro Housing, for instance, is a cohousing community located in Arizona’s Sonoran Desert. There, families, couples, and single people live in 28 homes in a tight-knit community that shares a kitchen, laundry room, library, meeting room, playroom, and storage rooms. Was the Rise of Neoliberalism the Root Cause of Extreme Inequality? The Only Thing That's Curbed Inequality: Catastrophe.

Led by Donkeys show their faces at last: ‘No one knew it was us’ Want to Save Europe? Learn From Poland. Beginning in 2017, the Polish opposition began rebuilding its entire political program. Liberal parties and organizations held conferences on how to restore the rule of law and repair state institutions. But we also knew that would not be enough. In order to win, liberals realized that we needed to discuss other topics and policies, like ecology, health care and welfare. Why rich countries are seeing more poverty. Change the narrative: how a Swiss group is beating rightwing populists.