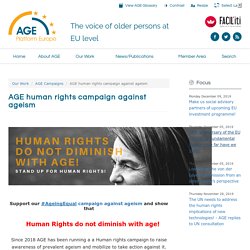 Since 2018 AGE has been running a a Human rights campaign to raise awareness of prevalent ageism and mobilize to take action against it. > Why is ageism a human rights issue? Ageism is the systematic discrimination of persons on the ground of their age. As other discriminations, it takes various forms ranging from stereotypes to mistreatment and abuse. Yet, ageism is a major obstacle to the social inclusion and equal participation of older persons. > An awareness-raising campaign AND a call for action Building on the progress achieved at United Nations' level in promoting human rights in old age, our ‘Ageing Equal’ campaign aims to spread the word about how ageism affects or will affect each of us across the whole life span.

Our campaign was first launched in 2018 on the occasion of the 70th anniversary of the International Human Rights Day. You can participate by: > Useful links. (3) Gen What? Bringing the Generations Together. How the elderly can help the young – and help themselves. Twinning nurseries with care homes for the elderly would boost children’s literacy skills, according to a thinktank that is calling for every childcare provider and school to build links with older people. 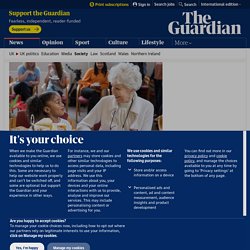 Children who regularly mix with older people see improvements to their language development, reading and social skills, something that is most easily achieved at “intergenerational care” centres highlighted in the Channel 4 series Old People’s Home for 4 Year Olds, says a report by United for All Ages. By playing and reading with children, the elderly are less likely to suffer loneliness, while the children get more opportunities for one-to-one reading and play time, it adds.

Intergenerational care began in Japan in 1976 and has spread to the US, Canada and the Netherlands. About Us – Rent A Grandma. Introducing Rent A Grandma “Always Trust Your Grandma” Rent A Grandma is your one stop agency for all your quality domestic staffing needs. 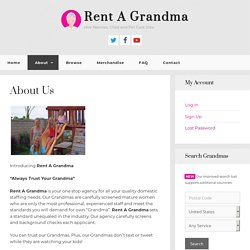 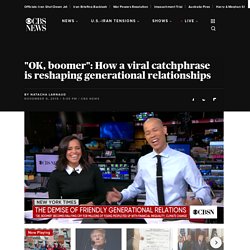 It started on the popular app TikTok as a clap-back at adults who seem dismissive of young people's concerns and are resistant to change, whether it's with the environment, technology or politics. 'OK boomer' is dividing generations. What does it mean? Back in 1963, when the term “baby-boomer” was first published in a Salt Lake Tribune article, it carried just one definition: a person born during the tail end or in the decade after World War II, when the United States saw a tremendous spike in births. 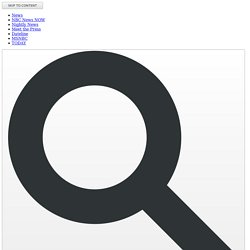 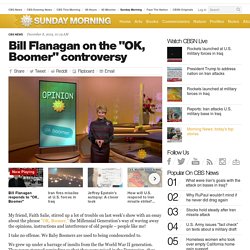 I take no offense. We Baby Boomers are used to being condescended to. We grew up under a barrage of insults from the the World War II generation. They never stopped reminding us that they were raised in the Depression, they beat Hitler, while we had everything given to us. The Archie Bunker crowd were dubbed "The Greatest Generation. " My generation gave the world three great icons: Seinfeld, Soprano, and Simpson. Now, I concede that Baby Boomer culture has taken up a lot of oxygen. And I appreciate how burdensome that must be to the children of Facebook.

As to our having messed up the planet? What can the Boomers take credit for? ‘OK Boomer’ Marks the End of Friendly Generational Relations. Nina Kasman, an 18-year-old college student selling “ok boomer" stickers, socks, shirts, leggings, posters, water bottles, notebooks and greeting cards, said that while older generations have always looked down on younger kids or talked about things “back in their day,” she and other teens believe older people are actively hurting young people. 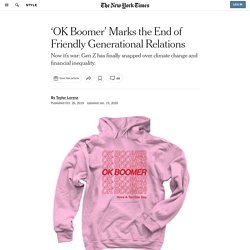 “Everybody in Gen Z is affected by the choices of the boomers, that they made and are still making,” she said. “Those choices are hurting us and our future. Everyone in my generation can relate to that experience and we’re all really frustrated by it.” “Gen Z is going to be the first generation to have a lower quality of life than the generation before them,” said Joshua Citarella, 32, a researcher who studies online communities. Teenagers today find themselves, he said, with “three major crises all coming to a head at the Gen Z moment.” And so Ms. (3) Baby Boomers vs. Millennials. (3) 'OK boomer': What it means and why the phrase is going viral. Millennials v baby boomers: a battle we could have done without. The generation of young people who came of age during the new millennium – “millennials”, as they’re commonly known – has divided opinion like no other. 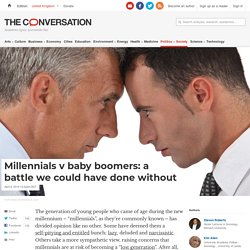 Some have deemed them a self-pitying and entitled bunch; lazy, deluded and narcissistic. Others take a more sympathetic view, raising concerns that millennials are at risk of becoming a “lost generation”. After all, they are making the transition into adulthood under much more precarious circumstances than their parents experienced as part of the “baby boomers” generation.

The challenges millennials face include the rising costs of education; an increased likelihood of unemployment and underemployment – even for a growing number of graduates – and falling incomes even when they are employed. Skip fights about digital devices over the holidays – instead, let them bring your family together. Holidays are a time for family and friends to come together, to celebrate and to enjoy each other’s company. 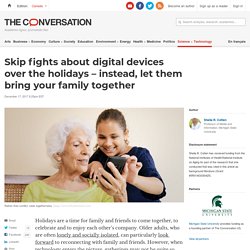 Older adults, who are often lonely and socially isolated, can particularly look forward to reconnecting with family and friends. However, when technology enters the picture, gatherings may not be quite so positive. All across the U.S., people of all ages are increasingly using technology – including adults 65 and older. (3) Generation Gap.