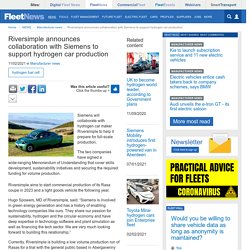 The two companies have signed a wide-ranging Memorandum of Understanding that cover skills development, sustainability initiatives and securing the required funding for volume production. Riversimple aims to start commercial production of its Rasa coupe in 2023 and a light goods vehicle the following year. Hugo Spowers, MD of Riversimple, said: “Siemens is involved in green energy generation and has a history of enabling technology companies like ours.

They share our passion for sustainability, hydrogen and the circular economy and have deep expertise in technology software and plant simulation as well as financing the tech sector. We are very much looking forward to building this relationship.” Currently, Riversimple is building a low volume production run of Rasas for a trial with the general public based in Abergavenny in Monmouthshire. Ineos signs hydrogen fuel cell deal for its off-road vehicle. Ineos and Korean carmaker Hyundai have agreed to work together on hydrogen fuel cells that will eventually power the British chemical company’s new off-road vehicles. 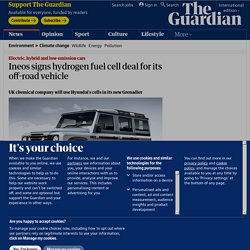 They will collaborate on developing a reliable supply of hydrogen in Europe, as well as using Hyundai’s fuel cells in Ineos’s vehicle, called the Grenadier. Sir Jim Ratcliffe, the founder of Ineos and one of Britain’s richest people, has invested millions in developing the car, which will come to market in early 2022 with an internal combustion engine. However, Ineos also plans to produce a version capable of running with zero carbon dioxide emissions to meet tightening environmental standards around the world, and it believes that battery electric power will not give it the rugged capabilities in areas with patchy electricity supply. Hydrogen fuel cells power electric motors with water as the only emission. 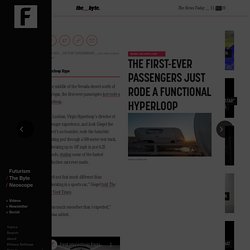 Sara Luchian, Virgin Hyperloop’s director of passenger experience, and Josh Giegel the project’s co-founder, rode the futuristic levitating pod through a 500-meter test track, accelerating up to 107 mph in just 6.25 seconds, rivaling some of the fastest production cars ever made. “It felt not that much different than accelerating in a sports car,” Giegel told The New York Times.

“It was much smoother than I expected,” Luchian added. Bentley to stop making petrol cars by 2030 and go fully electric. Bentley, the luxury carmaker, will stop making fossil fuel cars by 2030 and aims to be completely carbon neutral at the same time, in one of the most ambitious plans of any UK car manufacturer in the transition towards electric vehicles. 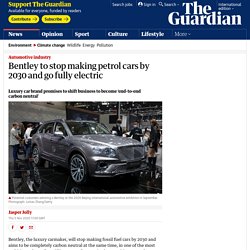 It will stop building cars with traditional internal combustion engines within six years, instead making hybrids and then its first battery electric cars in 2025. By 2030 it will sell only pure battery electric vehicles, with zero-carbon exhaust emissions. British Airways' last two 747s make final flights from Heathrow. The last two Boeing 747s operated by British Airways have made their final flights from Heathrow airport, after coronavirus meant the national carrier could no longer afford to fly its jumbo jets. 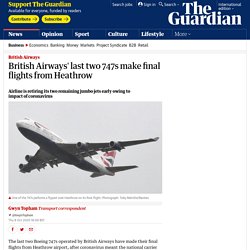 The distinctive four-engine planes, the backbone of BA’s long-haul fleet for almost 50 years, were beloved by pilots, enthusiasts and many passengers – but their noise and fuel consumption will mean few airline accountants, let alone environmentalists, will be sorry to see them go. BA’s final pair of 747s took off one after the other from Heathrow on Thursday morning at about 7.47am, with one circling back around the airport for the benefit of spectators. Having completed more than 104m miles of flying between them, the duo’s last trip was a short hop west. Airlines are now selling tickets for scenic 'flights to nowhere' Thanks to The Apprentice, President Trump was able to secure $230 million in licensing and endorsement deals, The New York Times reports, doing everything from shilling nearly obsolete video technology to co-writing a book called Think Big and Kick Ass: In Business and Life. 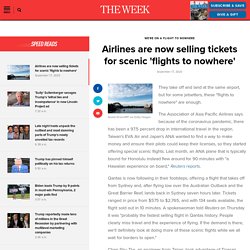 When The Apprentice premiered in January 2004, Trump boasted he was able to recover from financial setbacks because of his "brain" and "negotiating skills. " Tax records obtained by the Times show that this confidence and ability to market himself attracted several companies. For example, Trump received $7.3 million for showing up to Learning Annex speaking engagements, the Times reports, and earned $1.4 million in royalties for his Think Big and Kick Ass book, co-written by the Learning Annex's founder. World’s first hydrogen-electric passenger flight brings us ‘one step closer’ to zero-emissions air travel. The six-seater aircraft did a taxi, takeoff, full pattern circuit and landing at an airfield in Cranfield, England. 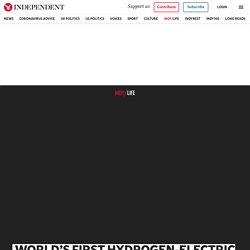 Sri Lanka to offer livestreams from wildlife parks. © Provided by Associated Press FILE- In this Aug. 12, 2011 file photo, a herd of Asiatic wild elephants gather at a national park in Minneriya, some 200 kilometers (125 miles) from Colombo, Sri Lanka. 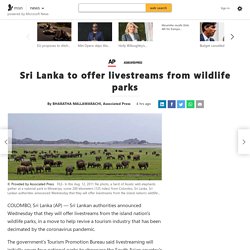 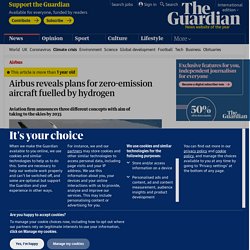 The European aersospace company revealed three different aircraft concepts that would be put through their paces to find the most efficient way to travel long distances by plane without producing the greenhouse gas emissions responsible for global heating. UK holidaymakers and business travellers could fly from London to the Canary Islands, Athens or eastern Europe without producing carbon emissions, should the plans become a commercial reality. Futurist predicts how people will holiday in 50 years' time. Holidays in 2070 will see people stay in 3D-printed accommodation after travelling there in a self-driving vehicle - and Blackpool will be the destination of choice for a beach fix. 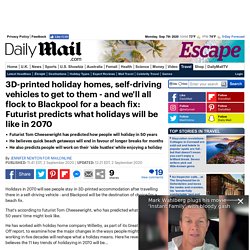 That's according to futurist Tom Cheesewright, who has predicted what a getaway in 50 years' time might look like. He has worked with holiday home company Willerby, as part of its Great British Break Off report, to examine how the major changes in the ways people might be living and working in five decades will reshape what a holiday means. Here he reveals what he believes the 11 key trends of holidaying in 2070 will be... 3D printed holiday homes. Flights to nowhere: Airlines launch sightseeing trips to avoid travel restrictions. 'E-highways' could slash UK road freight emissions, says study. The UK could eliminate the majority of the carbon dioxide emissions from road freight by installing overhead charging cables for electric lorries on “e-highways” across the country, a report by government-funded academics suggests.

The plan for a so-called electric road system would cost £19.3bn and put all but the most remote parts of the UK within reach of the trucks by the late 2030s, with the potential for the investment to pay for itself within 15 years, according to the report by the Centre for Sustainable Road Freight. The centre is backed by government research grants and industry partners including Tesco, Sainsbury’s and John Lewis.

British Airways retires Boeing 747 fleet as Covid-19 hits travel. British Airways has announced it will immediately retire its entire fleet of Boeing 747 planes after the downturn in travel sparked by the coronavirus outbreak. It will mean taking all 31 of its 747-400 planes out of its wider fleet of 300 aircraft, more than three years earlier than planned. The company, which is the largest operator of 747s, said: “It is with great sadness that we can confirm we are proposing to retire our entire 747 fleet with immediate effect.

Japan's new bullet train will keep running even during a natural disaster. Japan has long been ahead of the game when it comes to trains. The country’s bullet trains not only hit speeds of over 200MPH with ease, but they’re also notoriously punctual. Its latest train model, however, is taking Japanese transportation to new heights. The new train is called the N700S, and it is the first to feature a battery backup to keep it running in the event of a natural disaster. Given its size and proximity to the Pacific Ocean, Japan is regularly subjected to devastating natural disasters including earthquakes, typhoons, and tsunamis. Such occurrences are so common that the entire country factors disaster preparedness into its infrastructure, and that now includes its iconic bullet trains. 2b. Riversimple: Redesigning ownership - Wellbeing Economy Alliance.

Riversimple is a car manufacturer that has taken value creation to a completely different level. The business was founded to address the enormous environmental damage created by personal transport, with the purpose ‘To pursue, systematically, the elimination of the environmental impact of personal transport’. The founders recognised that they serve not only investors but a total of 6 different stakeholders: The Environment, Customers, Communities, Staff, Investors and Commercial Partners. “We believe that it’s possible to design a business model that aligns the interests of the business with those of people and the planet but the mindset of the business has to be aligned in order to conceive of and implement such a model, so this is a further reason for redesigning the governance.”

PETALING JAYA, July 3 — An airport in Taiwan is offering a chance for tourists to experience air travel amidst the Covid-19 pandemic. The cost of coronavirus: Greek tourism slump threatens a decade of hard-won gains - World. About now, Charlie Chahine should be welcoming his first international guests of the season to his Suites of the Gods resort on Santorini, Greece's most popular holiday island. A few of his staff of 30 would be serving poolside cocktails as guests drink in the island's famous sunset, his hotel becoming a little busier every day as summer approaches, bringing 2 million visitors to Santorini's cliff-edged shores. "The situation now is at zero, nothing is moving. How will tourists get here without airplanes? Hotels vs. Airbnb: Has Covid-19 Disrupted the Disrupter? UK electric buses boosted by innovative £20m battery deal. COVID-19 gives ASEAN nations a chance to improve public transportation. The Hidden Costs of EV Charging Infrastructure - Rocky Mountain Institute.

Shipping fuel regulation to cut sulphur levels comes into force. Sulphur will be cut drastically from global shipping transport fuels in 2020, in a move that should reduce some forms of air pollution, and may help towards tackling the climate emergency – but which could also lead to a rise in the price of flights. (29) What your commute will look like in 2050. (29) How the safety of automated flight is challenging tech experts. (29) Electric planes: the revolution has some snags.

(29) Japan’s hydrogen dream: game-changer or a lot of hot air? Speed Optimisation, not Slow Steaming is the Answer to Lowering Shipping Emissions Says GreenSteam. Five ways the shipping industry can reduce its carbon emissions. Daily emissions of cruise ships same as one million cars. New system to ensure safety of self-driving vehicles ahead of their sale. Law Commissions looks to future with self-driving vehicles.

What your commute will look like in 2050. Rolls-Royce and Widerøe: Joint research programme on zero-emissions aviation. The Robot Ship Set to Cross the Atlantic and Change the World. Driving A Shared, Electric, Autonomous Mobility Future - Rocky Mountain Institute. The Truth About Hydrogen - Rocky Mountain Institute. Ditch cars to meet climate change targets, say MPs. Uber unveils IPO with warning it may never make a profit. Will Flying Cars Provide a Sustainable Means of Transport in the Near Future? Hyperdrive. Anne Frank House. Audi E-Tron GT Concept confirmed for 'Avengers 4' - Autoblog. Hybrid Airships Could Change the Economics of Asia and Africa. The coming trends of mobility transformation. Seamless mobility: Getting beyond gridlock in cities.

Explore our featured insights. Drive Towards Sustainability? Big data and artificial intelligence: how will the future traveller get to their destination in 2040? Where China Is Leading the Mobility Revolution. Big Data Roadblocks Will Slow Driverless Cars Until 2040. Forget cars. We need electric airplanes. Nepal tests and treats TB with a flying pharmacy. Crowds of Tourists Are Ruining Popular Destinations. Could you give up flying? Meet the no-plane pioneers. GEODIS Introduces Exoskeletons to Support Employees' Backs. Me and my robotic suit. Blog – The Arctic shipping route no one is talking about – Eye on the Arctic.

Future - Norway's plan for a fleet of electric planes. Future of mobility access. Self-driving cars will never be moral. The road to seamless mobility. The 11-Horsepower Juggernaut. Creating a better future through better urban mobility.