4 reasons climate change is here, even though it's cold. Climate Emergency: Feedback Loops. Biden orders DOJ to end private prison contracts as part of racial equity push. President Joe Biden ordered his Department of Justice on Tuesday to phase out its contracts with private prisons, one of multiple new planks of Biden’s broad-focused racial justice agenda. 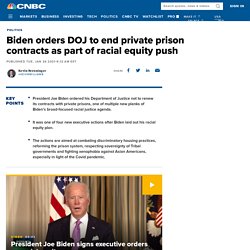 Biden signed four additional executive actions after laying out his racial equity plan at the White House. The actions are aimed at combating discriminatory housing practices, reforming the prison system, respecting sovereignty of Tribal governments and fighting xenophobia against Asian Americans, especially in light of the Covid pandemic. “I ran for president because I believe we’re in a battle for the soul of this nation,” Biden said before signing the actions. “And the simple truth is, our soul will be troubled as long as systemic racism is allowed to persist.” US Vice President Kamala Harris (L) watches as US President Joe Biden signs executive orders after speaking on racial equity in the State Dining Room of the White House in Washington, DC on January 26, 2021. Mandel Ngan | AFP | Getty Images. Biden indicates plans to cancel Keystone XL pipeline permit on 1st day in office, sources confirm.

U.S. president-elect Joe Biden has indicated plans to cancel the Keystone XL pipeline permit via executive action on his first day in office, sources confirmed to CBC News on Sunday. 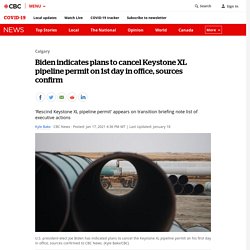 A purported briefing note from the Biden transition team mentioning the plan was widely circulated over the weekend after being shared by the incoming president's team with U.S. stakeholders. The words "Rescind Keystone XL pipeline permit" appear on a list of executive actions supposedly scheduled for Day 1 of Biden's presidency. The list shown to stakeholders is a lengthier version of a list already reported in the media based on a memo released publicly over the weekend by Biden's chief of staff Ronald Klain. That publicly reported memo from Klain did not mention Keystone XL, but cautioned that the memo was not a complete list of planned actions. Källa: Liberalerna splittrat i två jämnstora läger efter Sabunis migrationsutspel. 'Carbon-neutrality is a fairy tale': how the race for renewables is burning Europe's forests.

Kalev Järvik stands on a bald patch of land in the heart of Estonia’s Haanja nature reserve and remembers when he could walk straight from one side of the reserve to the other under a canopy of trees. 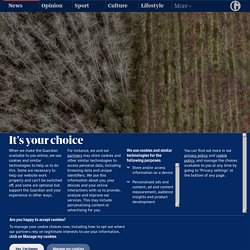 Järvik has lived in the Haanja uplands in the southern county of Võru for more than 10 years. His closeness to the forest has shaped his life as a carpenter and the fortunes of the surrounding villages, with their handicraft traditions – a substitute for farming on the poor arable land. Upcountry, travel literature promotes the region to city dwellers, promising its ancient woodlands as a place to rest and reinvigorate the mind. But in 2015, the Estonian government allowed what is known as clear-cutting in some parts of the Haanja nature reserve. The practice involves stripping entire areas of mature forest and removing whole tree trunks. “Sometimes I can’t bear to go outside,” Järvik says, standing by the stumps left on land stripped by the logging company Valga Puu.

House impeaches Trump for 'incitement of insurrection' The House voted 232 to 197 to impeach Trump exactly one week after rioters forced lawmakers to flee from the very chamber in which they cast ballots in the fourth presidential impeachment in US history -- and the first time a President has been impeached twice. 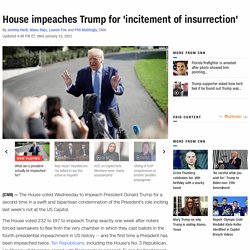 Ten Republicans, including the House's No. 3 Republican, Liz Cheney of Wyoming, joined with Democrats to impeach Trump for "incitement of insurrection. " While the vote won't force Trump from office -- the Senate trial isn't expected to begin until after President-elect Joe Biden is sworn in next week -- the vote was a visceral response from lawmakers in both parties furious at Trump after a deadly pro-Trump mob overran Capitol Police, ransacked the US Capitol and put the lives of Vice President Mike Pence and lawmakers in danger last week. 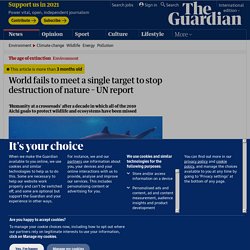 From tackling pollution to protecting coral reefs, the international community did not fully achieve any of the 20 Aichi biodiversity targets agreed in Japan in 2010 to slow the loss of the natural world. It is the second consecutive decade that governments have failed to meet targets. The Global Biodiversity Outlook 5, published before a key UN summit on the issue later this month, found that despite progress in some areas, natural habitats have continued to disappear, vast numbers of species remain threatened by extinction from human activities, and $500bn (£388bn) of environmentally damaging government subsidies have not been eliminated.

Six targets have been partially achieved, including those on protected areas and invasive species.