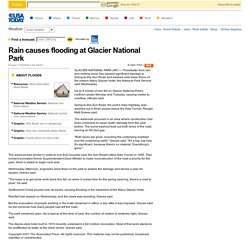 Up to 9 inches of rain fell on Glacier National Park's northern peaks Monday and Tuesday, causing creeks to overflow, officials said. Going-to-the-Sun Road, the park's main highway, was washed out in three places below the East Tunnel, Ranger Matt Graves said. The washouts occurred in an area where construction had been underway to repair water damage from the year before. The worst washout took out both lanes of the road, leaving an 80-foot gap. "Both lanes are gone, including the underlying roadbed and the underlying earth," Graves said. The washout was similar in scale to one that occurred near the Sun Road's West Side Tunnel in 1995. Wednesday afternoon, engineers were flown to the park to assess the damage and devise a plan for repairs, Graves said. 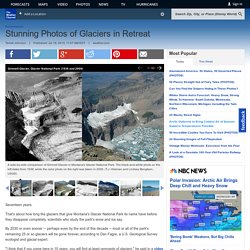 That's about how long the glaciers that give Montana's Glacier National Park its name have before they disappear completely, scientists who study the park's snow and ice say. By 2030 or even sooner -- perhaps even by the end of this decade -- most or all of the park's remaining 25 or so glaciers will be gone forever, according to Dan Fagre, a U.S. Geological Survey ecologist and glacial expert. "I think that if you come here in 10 years, you will find at least remnants of glaciers," he said in a video interview. "I think many of our glaciers will have become so small that they'll be hardly worthy of being called a glacier, but there will still be glacial ice there. " Fagre has worked with the park since 1991 as part of its Climate Change in Mountain Ecosystems program, which measures the retreat (and occasional advance) of its glaciers every year and keeps a photographic record of them that dates back to the early 1900s.

Glacier National Park Without Glaciers? Climate Change and Wildlife in the Northern Rockies  This blog is part of an ongoing series made possible through the State of the Rockies Project. 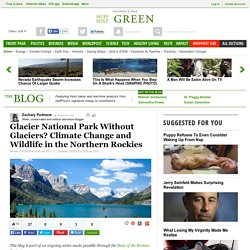 Alex sets up a self-timed camera with exaggerated care. Pointing the lens across the alpine valley in British Columbia where we're camped, he takes several practice shots of two waterfalls draining from a small glacier. He adjusts the camera's height and angle, shoots, adjusts again. It's late morning, and the rest of us are drifting lazily about camp as Alex's movements draw our attention. There are four of us here to take his picture, and his unnecessary use of the self-timer clues us in to an impending stunt. Alex is finally satisfied. We all laugh, wishing he was joking. Alex's self-timed picture in southern British Columbia.

A few hours earlier, I had sat up in my sleeping bag and looked upon the same scene as the last stars were fading with dawn. It's easy enough to ignore global warming when we're in front of a computer screen or at the grocery store. Photo by David Spiegel. Glacier National Park Prepares for Ice-Free Future. Text and photos by Allie Goldstein and Kirsten Howard Our hike up to Grinnell Glacier in Glacier National Park winds through alpine meadows, along the edge of ice-cut cliffs, up a waterfall staircase, and around a stubborn ram. 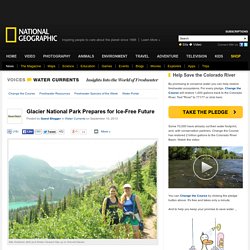 The views are breathtaking in the most literal sense of that word. The three lakes filling the valley below us are an impossible blue. As the trail cuts back and forth, we catch glimpses of Grinnell’s steel white face. And then finally, we’re there, standing at the edge of a giant ice bath as two young boys skip rocks across the mirroring water. Though beautiful, the hike feels a bit like a hospice visit.

A glacier is defined as a body of snow and ice that moves, and when a glacier dwindles to 25 acres or less in size, it lacks the mass that gives it mobility. The Glacier National Park that may soon have to change its name because of global warming. A century ago the Montana nature reserve had 150 glaciers; now only 25 remain within its bordersExpert from the U.S. 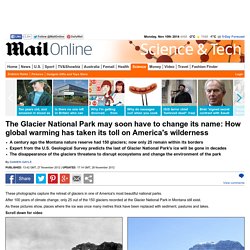 Geological Survey predicts the last of Glacier National Park's ice will be gone in decadesThe disappearance of the glaciers threatens to disrupt ecosystems and change the environment of the park By Damien Gayle Published: 13:42 GMT, 27 November 2012 | Updated: 17:14 GMT, 28 November 2012 These photographs capture the retreat of glaciers in one of America's most beautiful national parks. After 100 years of climate change, only 25 out of the 150 glaciers recorded at the Glacier National Park in Montana still exist. As these pictures show, places where the ice was once many metres thick have been replaced with sediment, pastures and lakes. Scroll down for video Even further down: A man stands at Grinnell glacier overlook, observing the large glacier that fills the basin at Lewis mountain range in the Rocky Mountains in 1920, left. Dr Dan Fagre, who leads the U.S. 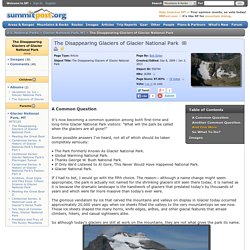