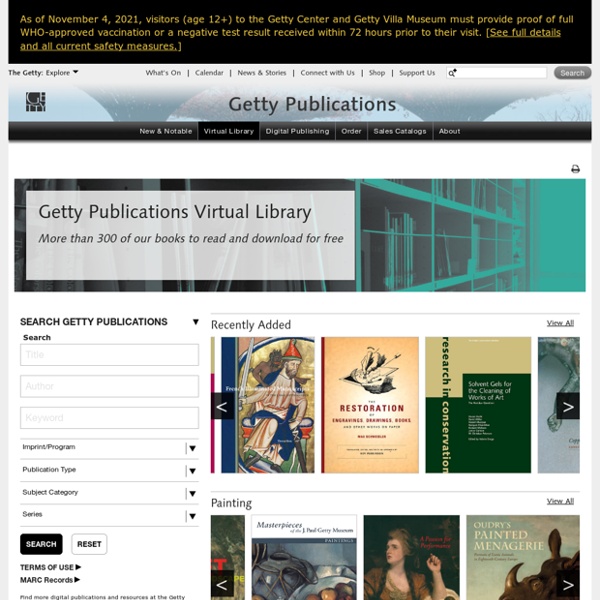 Romanesque Art: History, Characteristics Background (c.450-1000) Between Romanesque and antique art there is an interval of many centuries, during which the Northern tribes made their entry into history. This period of folk migration is one of prehistoric arts and crafts, which are well known. 20 more awesomely untranslatable words from around the world If only you could use these words in Scrabble. Photo: Jeremy Mates When linguists refer to “untranslatable” words, the idea is not that a word cannot somehow be explained in another language, but that part of the essence of the word is lost as it crosses from one language to another. This often is due to different social and cultural contexts that have shaped how the word is used. In the novel Shame, Salman Rushdie’s narrator suggests: “To unlock a society, look at its untranslatable words.”

The Visual Elements of Art The Visual Elements - Pattern PAUL KLEE (1879-1940) Dream City, 1921 (warercolor and oil) Pattern is made by repeating or echoing the elements of an artwork to communicate a sense of balance, harmony, contrast, rhythm or movement. There are two basic types of pattern in art: Natural Pattern and Man-Made Pattern.

Why is this painting so captivating? - James Earle and Christina Bozsik Diego Velazquez (June 6, 1599 ­ August 6, 1660) was a Spanish painter who was hired by Philip IV at the age of 25. You can learn more about his life here. Interested in learning more about Velazquez’s life as a court painter? This site describes his work. When Philip IV inherited power in 1621 Spain was a massive empire, but by the time he died in 1665, Spain’s power and influence had dramatically decreased. 25 Handy Words That Simply Don’t Exist In English Approximately 375 million people speak English as their first language, in fact it's the 3rd most commonly spoken language in the world (after Mandarin Chinese and Spanish). Interestingly enough it's the number 1 second language used worldwide - which is why the total number of people who speak English, outnumber those of any other. But whilst it's the most widely spoken language, there's still a few areas it falls down on (strange and bizarre punctuation rules aside).

BCIN : Bibliographic Database of the Conservation Information Network - Ghent University Library database BCIN : Bibliographic Database of the Conservation Information Network Provides access to over 190,000 bibliographic citations for conservation literature. BCIN includes citations from the Art and Archaeology Technical Abstracts (prior to 1998), technical reports, con... show more View online How to get an art education without going to art school An education in the UK currently slides between £3,000 and £9,000 per year, and with many students struggling to find work after the golden gates of uni close you'd be forgiven for thinking 'what's the point?' Enter: the Internet, a glorious wormhole of philosophical memes, endless hours wasted and, if you know where to look, an actual education. Ever wanted to strap on some boxing gloves, roll around in some paint and make a masterpiece? Sit in silence for hours while a complete stranger – and possibly your long lost love – stares back at you? Sneak out in the night and irrationally remove a piece of the wall from a bridge that a famous artist painted?

Image and Data Resources Open Access Policy The Metropolitan Museum of Art creates, organizes, and disseminates a broad range of digital images and data that document the rich history of the Museum, its collection, exhibitions, events, people, and activities. Images of artworks in the Museum's collection fall into two categories: images of works the Museum believes to be in the public domain, or those to which the Museum waives any copyright it might have images of works the Museum knows to be under copyright or other restrictions Leonardo Home Page Who was Leonardo da Vinci? He had a keen eye and quick mind that led him to make important scientific discoveries, yet he never published his ideas. He was a gentle vegetarian who loved animals and despised war, yet he worked as a military engineer to invent advanced and deadly weapons. He was one of the greatest painters of the Italian Renaissance, yet he left only a handful of completed paintings. Before you explore this site, you may want to read the