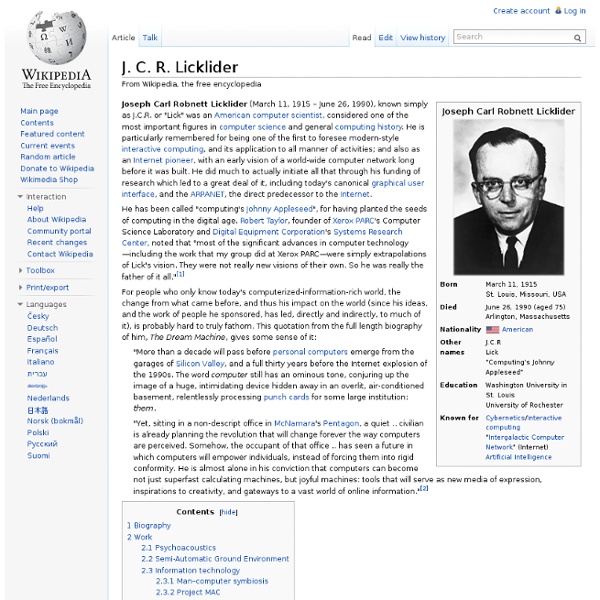 Man-Computer Symbiosis Man-Computer Symbiosis J. C. R. Summary Man-computer symbiosis is an expected development in cooperative interaction between men and electronic computers. 1.1 Symbiosis The fig tree is pollinated only by the insect Blastophaga grossorun. "Man-computer symbiosis is a subclass of man-machine systems. 1.2 Between "Mechanically Extended Man" and "Artificial Intelligence" As a concept, man-computer symbiosis is different in an important way from what North [21] has called "mechanically extended man." In one sense of course, any man-made system is intended to help man, to help a man or men outside the system. Man-computer symbiosis is probably not the ultimate paradigm for complex technological systems. Present-day computers are designed primarily to solve preformulated problems or to process data according to predetermined procedures. However, many problems that can be thought through in advance are very difficult to think through in advance. The other main aim is closely related. [1] A.

Marvin Minsky's Home Page MIT Media Lab and MIT AI Lab Professor of Media Arts and Sciences, MIT Professor of E.E.C.S., M.I.Tminsky at media.mit.edu Abstracts Bibliography Biography People Marvin Minsky has made many contributions to AI, cognitive psychology, mathematics, computational linguistics, robotics, and optics. In recent years he has worked chiefly on imparting to machines the human capacity for commonsense reasoning. He received the BA and PhD in mathematics at Harvard (1950) and Princeton (1954). Some Publications The Emotion Machine 2006 (book) draft ( 0 1 2 3 4 5 6 7 8 9 Bib ) Essays on Education --- (for OLPC) --- ( 1 2 3 4 5 ) Research Groups Family Two AI Pioneers. Two Bizarre Suicides. What Really Happened? In December 1996, snarky geeks created a newsgroup in his honor, alt.mckinstry.pencil-dick, taking as its charter "Discussion of Usenet kook McKinstry, aka 'McChimp.'" Leading the brigade was Jorn Barger, who would later run the site Robot Wisdom (and coin the term weblog). "You write like a teenager, and have shown frequent signs of extreme cluelessness," Barger emailed McKinstry in May 1995. McKinstry never shied away from a flame war. But some of McKinstry's improbable boasts turned out to be true. The eccentric researcher made friends among the bohemians and hackers of Santiago. "Yes, it is possible," Minsky is supposed to have replied, "but the training corpus would have to be enormous." That was apparently all the encouragement McKinstry needed. On July 6, 2000, McKinstry retooled his pitch for a collaborative AI database. Mindpixel was a term McKinstry invented to describe the individual user-submitted propositions. The criticisms and flames never let up. Do fish have hair?

ChalmersReply Comment on David Chalmers “The Singularity: A Philosophical Analysis” Journal of Consciousness Studies 19(1-2):119-125. 2012. By Robin Hanson, July 1, 2011. Abstract Chalmers is right: we should expect our civilization to, within centuries, have vastly increased mental capacities, surely in total and probably also for individual creatures and devices. Introduction David Chalmers says academia neglects the huge potential of an intelligence explosion: An intelligence explosion has enormous potential benefits: a cure for all known diseases, an end to poverty, extraordinary scientific advances, and much more. Apparently trying to avoid describing the scenario that interests him in too much speculative detail, Chalmers goes far in the other direction, offering rather weak descriptions of his key scenario and the issues that concern him about it. Expect Growth Our clearest and most dramatic long-term historical trend has been a vast and broad growth in our capacities. Inter-Generational Conflicts

The Scientists Preparing for The Apocalypse The men were too absorbed in their work to notice my arrival at first. Three walls of the conference room held whiteboards densely filled with algebra and scribbled diagrams. One man jumped up to sketch another graph, and three colleagues crowded around to examine it more closely. Their urgency surprised me, though it probably shouldn’t have. These academics were debating what they believe could be one of the greatest threats to mankind—could superintelligent computers wipe us all out? I was visiting the Future of Humanity Institute, a research department at Oxford University founded in 2005 to study the “big-picture questions” of human life. Predictions of the end of history are as old as history itself, but the 21st century poses new threats. In July this year, long-forgotten vials of smallpox—a virus believed to be “dead”—were discovered at a research center near Washington, DC. The FHI was founded nine years ago by Nick Bostrom, a Swedish philosopher, when he was 32.

h+ Media | Are Artificial Intelligence Doomsayers like Skeptical Theists? - h+ Media Some of you may have noticed my recently-published paper on existential risk and artificial intelligence. The paper offers a somewhat critical perspective on the recent trend for AI-doomsaying among people like Elon Musk, Stephen Hawking and Bill Gates. Of course, it doesn’t focus on their opinions; rather, it focuses on the work of the philosopher Nick Bostrom, who has written the most impressive analysis to date of the potential risks posed by superintelligent machines. I want to try and summarise the main points of that paper in this blog post. To give a general overview: the argument I present in the paper is based on an analogy between a superintelligent machine and the God of classical theism. That argument might sound pretty abstract right now. (Note: my spelling of ‘skeptical’ has rarely been consistent: sometimes I opt for the US spelling; other times I opt for the British spelling. 1. With that interpretive point clarified, I will move on. A. B. C. 2. (Bostrom 2014, 116) 3. 4.

A robot prepared for self-awareness: Expanded software architecture for walking robot Hector -- ScienceDaily A year ago, researchers at Bielefeld University showed that their software endowed the walking robot Hector with a simple form of consciousness. Their new research goes a step further: they have now developed a software architecture that could enable Hector to see himself as others see him. "With this, he would have reflexive consciousness," explains Dr. Holk Cruse, professor at the Cluster of Excellence Cognitive Interaction Technology (CITEC) at Bielefeld University. The architecture is based on artificial neural networks. Together with colleague Dr. Both biologists are involved in further developing and enhancing walking robot Hector's software. Until now, Hector has been a reactive system. In their previous research, both CITEC researchers had already determined that Hector's control system could adopt a number of higher-level mental states. In their new research, Cruse and Schilling show a way in which reflexive consciousness could emerge.

The real reason Elon Musk is scared of A.I. | We Are Many Elon Musk and other big shots in the tech industry are really scared of artificial intelligence. He recently donated $10 million to “an AI research institute earmarked for a global research program aimed at keeping AI beneficial to humanity.” What he and his friends fear is an uncontrollable “demon” as he calls it, one that we would summon ourselves and be unable to bend to our will. He actually refers to the movie Terminator to explain the potential dangers of AI. There are a lot of people taking him seriously, after all, $10 million can buy you a lot of credibility, and Musk is venerated in the tech industry for his innovative ventures like Tesla and SpaceX. Of course, Musk is not the first to echo this specific type of existential fear. It would be easy to dismiss these claims as eccentricity or perhaps even easier to tacitly agree with them based on our insidious form of 21st century common sense that sees nothing as impossible or really all that important.

Florida pastor plans to convert robots to Christianity Artificial intelligence and autonomous robots should be encouraged to become religious, a US reverend has said. Reverend Christopher Benek, associate pastor of Providence Presbyterian Church in Florida, believes advanced forms of artificial intelligence should be welcomed into the Christian faith. "I don't see Christ's redemption limited to human beings," Benek said in an interview with the futurist Zoltan Istvan. "If AI is autonomous, then we should encourage it to participate in Christ's redemptive purposes in the world." The rise of artificial intelligence in recent years has led several high-profile scientists and futurists to warn of the dangers posed if its development is not kept in check. In January renowned physicist Stephen Hawking and entrepreneur extraordinaire Elon Musk pledged to ensure that the development of artificial intelligence benefits rather than hinders mankind. "Who is to say that one day AIs might not even lead humans to new levels of holiness?"

The Rights of Robots: Technology, Culture and Law in the 21st Century Robot rights are already part of judiciary planning–can sentient machines be far off? This discussion of robot rights looks in-depth at issues once reserved for humans only. Originally published 1988. Published on KurzweilAI.net August 6, 2001. In the last five years, the Hawaii Judiciary has developed as part of its comprehensive planning program, a futures research component. At present the Courts futures program is engaged in a variety of activities. However in the past few years of concentrating on short and medium term futures, we have remained fascinated by one long term emerging issue–the Rights of Robots. The predictable response to the question: should robots have rights has been one of disbelief. Why then in the face of constant ridicule should we pursue such a topic. In the coming decades, and perhaps even years, sophisticated thinking devices will be developed and installed in self-propelled casings which will be called robots. The Indian recognizes the collective. 1. 2. 3.

Promises and Perils on the Road to Superintelligence Global Brain / Image credit: mindcontrol.se In the 21st century, we are walking an important road. Our species is alone on this road and it has one destination: super-intelligence. The most forward-thinking visionaries of our species were able to get a vague glimpse of this destination in the early 20th century. Paleontologist Pierre Teilhard de Chardin called this destination Omega Point. One conversation on the ever accelerating progress of technology and changes in the mode of human life, which gives the appearance some essential singularity in the history of the race beyond which human affairs, as we know them, could not continue. For thinkers like Chardin, this vision was spiritual and religious; God using evolution to pull our species closer to our destiny. Today the philosophical debates of this vision have become more varied, but also more focused on model building and scientific prediction. It’s hard to make real sense of what this means. Promise #1: Omniscience Cadell Last