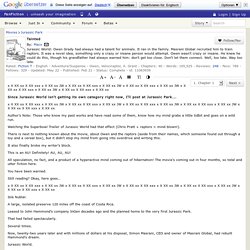 Author's Note: Those who know my past works and have read some of them, know how my mind grabs a little tidbit and goes on a wild run. Watching the Superbowl Trailer of Jurassic World had that effect (Chris Pratt + raptors = mind blown!). There is next to nothing known about the movie, about Owen and the raptors (aside from their names, which someone found out through a toy and a cereal box), but it didn't stop my mind from going into overdrive and writing this. It also finally broke my writer's block. This is an AU! All speculation, no fact, and a product of a hyperactive mind coming out of hibernation! 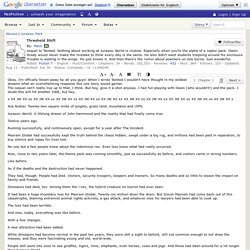 I'm offically blown away by all you guys! When I wrote Tainted I wouldn't have thought in my wildest dreams what an overwhelming response this one story would garner.The sequel can't really live up to that, I think. But hey, give it a shot anyway. I had fun playing with Owen (who wouldn't!) And the pack. Accidental Imprint Chapter 1, a jurassic park fanfic. 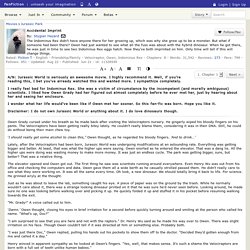 I highly recommend it. Well, if you're reading this, I bet you've already watched this and wanted more. I sympathize completely. I really feel bad for Indominus Rex. She was a victim of circumstance by the incompetent (and morally ambiguous) scientists. I wonder what her life would've been like if Owen met her sooner. Disclaimer: I do not own Jurassic World or anything about it. Owen Grady cursed under his breath as he made back after visiting the Velociraptors nursery. A Little Bit of Trouble - karategal - Jurassic Park (Movies), Jurassic World (2015) [Archive of Our Own] Chapter Text His front door had a hole in it. 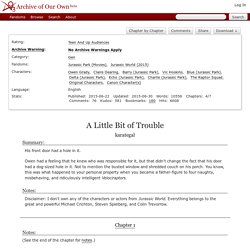 Owen had a feeling that he knew who was responsible, but that didn't change the fact that his door had a dog-sized hole in it. Not to mention the busted window and shredded couch on his porch. You know, this was what happened to your personal property when you became a father-figure to four naughty, misbehaving, and ridiculously intelligent Velociraptors. Someone wasn't getting a box of sirloin steaks for Christmas, that was for damned sure. "Okay, my little ladies," drawled Owen, "Who said that it was acceptable to turn my nice, Masrani-funded house into a shack of shredded wood? 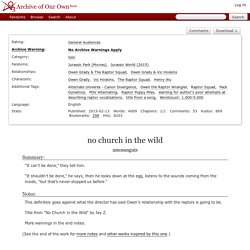 “It shouldn’t be done,” he says, then he looks down at the egg, listens to the sounds coming from the inside, “but that’s never stopped us before.” In the beginning, Owen tells himself that this is all for behavioral science. That his work with cheetahs and lions and tigers isn’t as important as this is. He promises himself (and his mama and his sisters back in the US) that he won’t get attached. He names her Bravo (his codename is Alpha, he thinks it fits) and when he notices the color of the long, jagged stripe running down the length of her body, he starts to call her Blue.

Charlie and Delta hatch next, nearly simultaneously. Charlie tumbles out of her egg, blinking up at Owen and crackling up at him – he smirks, rubs a finger down her snout to brush away a bit of egg shell. “Hello, beautiful,” he whispers. Delta calls to him, grabbing at the pad of his finger. “Easy, girl,” he says, reaching beside him for the small cup of ground up beef.

Tainted - Macx - Jurassic Park - All Media Types, Jurassic World (2015) [Archive of Our Own] Chapter Text For the past weeks Owen had felt a strange kind of pressure growing in the back of his head. 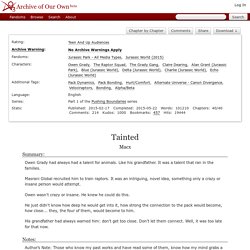 It was like a mind pushing in, like something intelligent and hungry, something primal, like Blue and still not like her. Threshold Shift - Macx - Jurassic World (2015) [Archive of Our Own] Chapter Text You guys...! 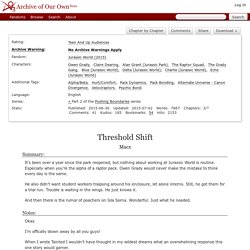 I can't express in words how overwhelmed I am by your comments! Thank you so much! The story is growing and it's a slow-build, so yes, there will be more with the interns. A lot more! So thank you again! Going out into the restricted area wasn’t just for training, though it was one of the main purposes. Trouble - Illeana Starbright (SunlightOnTheWater) - Jurassic Park - All Media Types, Jurassic World (2015) [Archive of Our Own] Chapter Text Owen found himself dragging his feet the next morning. 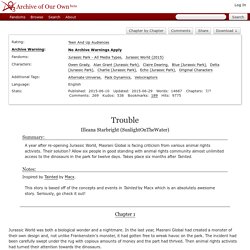 His girls were curious and a little excited about the visitors, milling about their paddock almost casually, but he was less than thrilled. Aside from the few preternatural trainers he was friends with, most people thought he was crazy for stepping inside a paddock with the raptors. Worse yet, most people were terrified by what they witnessed. Having animal rights activists think he was clinically insane wouldn't help garner their support for Jurassic World.

He stepped outside at a quarter til ten, brilliant sunlight washing over him. Pack, Blue told him, standing near the part of the paddock closest to his home. "Yeah," he agreed softly. The rumble of an approaching vehicle had his head snapping up to take in the sight of a black BMW splattered with dirt. "How are you this morning? " Wild Frontier - RunawayDeviant - Jurassic World (2015) [Archive of Our Own] Chapter Text The next morning, Owen woke up moving. 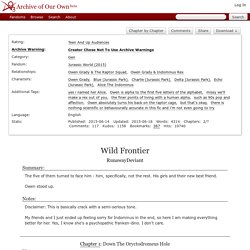 He leaned forwards slightly. He leaned backwards slightly. And again. And again. He sat up straighter and turned to look at the huge, sleeping dinosaur behind him. Blue, disgruntled, stood from the spot where she'd been trapped between them and padded away into the enclosure, likely to find sleep in her usual ditch.