Right to be forgotten.

EU commissioner : right to be forgotten not more than CopyR

G moves to comply with the decision. 12.000 requests the first day. Italy Supreme Court said G not liable. German Regulator Says Google Promises ‘Right to be Forgotten’ Me. The CJEU's Google Spain decision: a right to be forgotten within the limits of the freedom of expression. EU court says Google must delete search results.

In a landmark case for the future of digital privacy, Europe’s highest court ruled today that internet search behemoths, such as Google, can be required to block access to search results about individuals at their request. 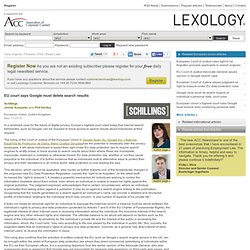 European Court of Justice issues judgment on right to erasure under EU data protection rules. Following the referral of a series of questions from the Spanish National High Court, the European Court of Justice (ECJ) ruled earlier this week that individuals have a right to ask search engines to remove links containing personal data about them, if the information about the individual is “inadequate, irrelevant or no longer relevant”. 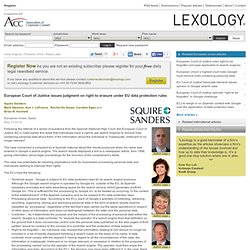 The case concerned a complaint by a Spanish national about the results produced when his name was entered in Google’s search engine. The search results displayed a link to a newspaper article, from 1998, giving information about legal proceedings for the recovery of the complainant’s debts. The case has potentially far reaching implications both for businesses processing personal data and individuals seeking to exercise their rights. The ECJ held the following: Territorial scope - Google is subject to EU data protection laws for its search engine business. Rising like a Phoenix: The ‘Right to be Forgotten’ before the ECJ.

Judgment of the Court (Grand Chamber) in C-131/12 Google Spain v AEPD and Mario Costeja Gonzalez When Advocate General Jääskinen delivered his Opinion in the Google Spain case in June of last year (as commented upon on this blog here), it seemed to many (myself included) that it was the last nail in the coffin of the controversial ‘right to be forgotten’ provided for in the EU’s Proposed Data Protection Regulation. 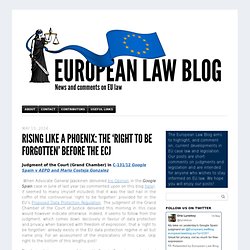 The judgment of the Grand Chamber of the Court of Justice delivered this morning in this case would however indicate otherwise. Indeed, it seems to follow from the judgment, which comes down decisively in favour of data protection and privacy when balanced with freedom of expression, that a ‘right to be forgotten’ already exists in the EU data protection regime in all but name only. Google ethics adviser: The law needs bold ideas to address the digital age. The recent ruling by the European Court of Justice in favour of the “right to be forgotten” is part of the coming of age of our information society. 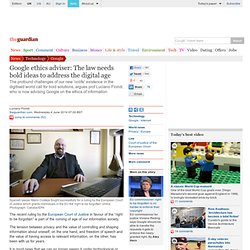 The tension between privacy and the value of controlling and shaping information about oneself, on the one hand, and freedom of speech and the value of having access to relevant information, on the other, has been with us for years. It is good news that we can no longer sweep it under technological or juridical carpets. Denial was the first obstacle to finding a solution. Popular Reads: On Google, the EU, and the Right to be Forgotten. The ECJ ruling provides yet another example of the cultural and legal tension between the value placed on unfettered free speech, particularly in the U.S., and the ever-expanding protection of individual privacy in the E.U... - Robert E. 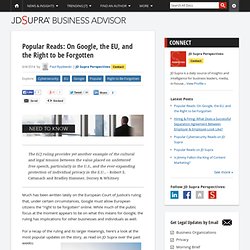 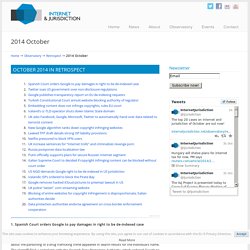 Spanish Court orders Google to pay damages in right to be de-indexed case Applying the Court of Justice of the EU ruling on the right to be de-indexed, the Barcelona Court of Appeals ordered Google Spain to pay damages to a Spanish citizen. A website containing information about the pardoning of a drug trafficking crime appeared in search results for the individual’s name. The plaintiff filed a complaint with the Spanish Data Protection Authority, which ordered Google to remove the link. 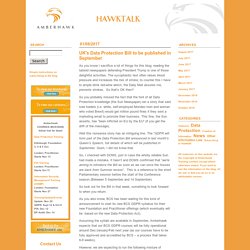 The recent publication of a “memorandum of understanding” and analysis of the TfL Certificate (last week’s blog) shows that the current Government has continued this policy. It is my view, that if the national security agencies were required to apply the data protection principles, subject to appropriate exemptions and an effective system of regulation (not necessarily by the Information Commissioner), then the extensive, mass surveillance undertaken by these agencies would have been considered (and regulated) in the context of necessity, relevance and retention. Droit loubli : Google débordé face à des centaines de demandes en Grande-Bretagne. 01net. 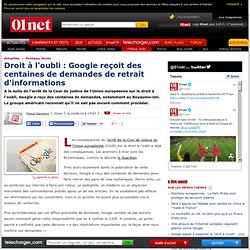 Opinion: Google privacy ruling could change how we all use the Internet. Europe's top court said Google is responsible for data it links toA data protection expert says the court ruled in favor of privacy and individual rightsFor Google, this result creates a headache, and potentially huge costs, Paul Bernal writes Editor's note: Paul Bernal is a lecturer in Information Technology, Intellectual Property and Media Law at the University of East Anglia Law School, and a specialist in data privacy issues. 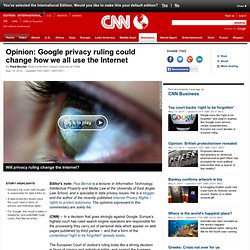 He is a blogger and the author of the recently published Internet Privacy Rights -- rights to protect autonomy. The opinions expressed in this commentary are solely his. (CNN) -- In a decision that goes strongly against Google, Europe's highest court has ruled search engine operators are responsible for the processing they carry out of personal data which appear on web pages published by third parties -- and that a form of the contentious "right to be forgotten" already exists. Net.wars: Memory hole. Some years ago, a long-time member of the WELL became the CEO of a public company. 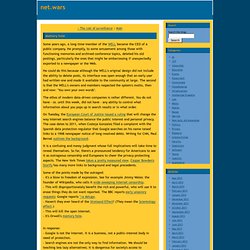 He promptly, to some amusement among those with functioning memories and archived conference topics, deleted his old postings, particularly the ones that might be embarrassing if unexpectedly exported to a newspaper or the Web. He could do this because although the WELL's original design did not include the ability to delete posts, its interface was open enough that an early user had written one and made it available to the community at large.

The second is that the WELL's owners and members respected the system's motto, then and now: "You own your own words". The ethos of modern data-driven companies is rather different. You do not have - or, until this week, did not have - any ability to control what information about you pops up in search results or in what order. It is a confusing and messy judgment whose full implications will take time to reveal themselves. IAPP. Broadcast Date: May 30, 2014 11 am - 12:30 pm EDT On 13 May, the European Court of Justice (ECJ) ruled that Google may be forced to remove links to factual and legally permissible news stories about individuals from its search results that are “inadequate, irrelevant … or excessive” under a “right to be forgotten” that is derived from the Data Protection Directive 95/46/EC.

In the U.S., access to legal, factual information is protected by the First Amendment to the Constitution. Google shall forget your personal data! What Google Must Forget: The EU Ruling on the Right to Be Forgotten. The European right to be forgotten is just what the Internet needs. Photo illustration by Juliana Jiménez Jaramillo. Photo by Kacper Pempel/Reuters. The right to be forgotten.

That’s the colorful term in Europe for the right to eliminate unwanted information about yourself on the Web. The European Court of Justice enforced that right Tuesday, holding that a Spanish data privacy authority acted properly to compel Google to remove from its search results links to old articles about a Spanish lawyer’s debt problems. Jonathan Zittrian criticizes the ECJ’s ruling as being both “too broad” and “curiously narrow” because it could censor the republication of public records and because it does not force the newspaper that Google linked to do take down its own pages.

But that’s because the ECJ endorsed a balancing test–your privacy interest versus the public’s interest. It sensibly recognized that people get their information about others by using search engines, not usually by looking back through newspaper websites. Don’t Force Google to ‘Forget’ CAMBRIDGE, Mass. — THE European Court of Justice ruled on Tuesday that Europeans have a limited “right to be forgotten” by search engines like Google.

According to the ruling, an individual can compel Google to remove certain reputation-harming search results that are generated by Googling the individual’s name. The court is trying to address an important problem — namely, the Internet’s ability to preserve indefinitely all its information about you, no matter how unfortunate or misleading — but it has devised a poor solution. The court’s decision is both too broad and curiously narrow. It is too broad in that it allows individuals to impede access to facts about themselves found in public documents. This is a form of censorship, one that would most likely be unconstitutional if attempted in the United States. From the “right to be forgotten” to collective amnesia.

In the aftermath of the European Court of Justice’s colossal mistake yesterday in obliging search engines to remove material anybody thinks might be detrimental to them from the internet, I have had the opportunity to speak at length on Spanish state television, the EFE news agency, and the Spanish-language edition of the Huffington Post about the issue. This is a subject that I have written about extensively, what’s more, I am an easy quote, given my position as an academic with no axe to grind. Debate on this matter is taking place within the wrong framework: of course we would all like to protect our rights, and nobody wants to see something about themselves on the internet that might damage their reputation or breach their privacy. The “right to be forgotten” brings to mind the idea of a clean slate, or starting over, or having paid one’s dues. Fine. Right to be forgotten ruling highlights global reach of EU law. What we can salvage from 'right to be forgotten' ruling.

Shakespeare's great villain Iago spoke of reputation as "an idle and most false imposition: oft got without merit, and lost without deserving". But at the same time, "the immediate jewel of [our] souls". This conflict between reputation as something that is hazardously imperfect, yet of deep personal significance, is captured rather exquisitely by the Google v Spain case. This startling data protection ruling from Europe's highest court has caught the entire internet off-guard. Rising like a Phoenix: The ‘Right to be Forgotten’ before the ECJ. The CJEU's Google Spain judgment: failing to balance privacy and freedom of expression. By Steve Peers The EU’s data protection Directive was adopted in 1995, when the Internet was in its infancy, and most or all Internet household names did not exist. Documents. Documents. Language of document : delivered on 25 June 2013 (1) Does the Google data protection ruling mean anything copyright-wise?

Top EU court backs ‘right to be forgotten’ in Google privacy case. European Union Court Ruling To Remove Google Search Results. European Court of Justice issues judgment on right to erasure under EU data protection rules. Could ISPs be forced to take action to guarantee individual’s “right to be forgotten”? From the “right to be let alone” to control over personal data. In recent years technological innovations and the expanding range of services available on the internet have conjured up an every-increasing variety of new issues for data protection. While social networks allow personal data to be continuously shared, a simple search on a search engine may produce a lot of information concerning an individual’s present and past life. At the very beginning the right to privacy was mainly conceived as “right to be let alone”, i.e. freedom from surveillance and interference of others.

Then individuals have been entrusted with powers of active control over their personal data, drawing up a “right to protection” of one’s personal data.