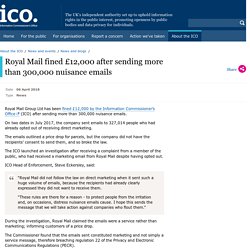 On two dates in July 2017, the company sent emails to 327,014 people who had already opted out of receiving direct marketing. The emails outlined a price drop for parcels, but the company did not have the recipients’ consent to send them, and so broke the law. The ICO launched an investigation after receiving a complaint from a member of the public, who had received a marketing email from Royal Mail despite having opted out. ICO Head of Enforcement, Steve Eckersley, said: “Royal Mail did not follow the law on direct marketing when it sent such a huge volume of emails, because the recipients had already clearly expressed they did not want to receive them. 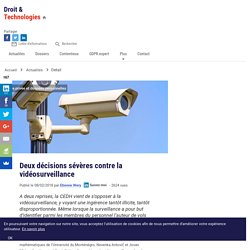 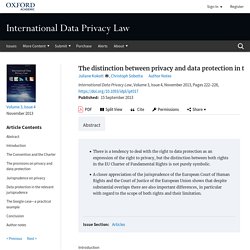 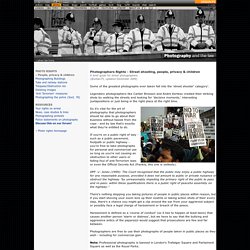 (©urban75, updated December 2009) Some of the greatest photographs ever taken fall into the 'street shooter' category'. Legendary photographers like Cartier Bresson and Andre Kertesz created their striking shots by walking the streets and looking for 'decisive moments,' interesting juxtapositions or just being in the right place at the right time. Privacy Damages Awarded for Commercial Use of a Person’s Image in a Public Setting. Organizations which use images of persons engaged in activities in public settings may want to revisit their use of such images in light of a recent Ontario decision which found such use to constitute an invasion of privacy that warranted a $4,000 damages award. 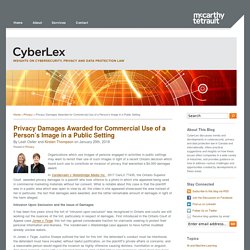 In Vanderveen v Waterbridge Media Inc., 2017 CanLII 77435, the Ontario Superior Court awarded privacy damages to a plaintiff who took offence to a photo in which she appeared being used in commercial marketing materials without her consent. What is notable about this case is that the plaintiff was in a public area which was open to view by all, the video in she appeared showcased the area instead of her in particular, the fact that damages were awarded, and the rather remarkable amount of damages in light of the harm alleged. Intrusion Upon Seclusion and the Issue of Damages Context The Defendant, Waterbridge Media Inc. Www.bbc. Image copyright Channel 5 Channel 5 has been ordered to pay a couple £10,000 each for the distress of broadcasting them being evicted. 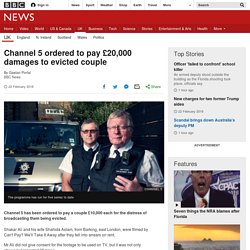 Shakar Ali and his wife Shahida Aslam, from Barking, east London, were filmed by Can't Pay? We'll Take It Away after they fell into arrears on rent. Mr Ali did not give consent for the footage to be used on TV, but it was not only shown but repeated 35 times. The High Court ruled the couple's privacy outweighed Channel 5's right to freedom of expression. Dutch DPA: unlimited publication of WHOIS-data violates privacy law. News message/30 October 2017 The unlimited publication of WHOIS-data of domain name registrants by Dutch registries is a violation of current Dutch privacy law. 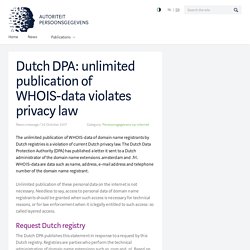 The Dutch Data Protection Authority (DPA) has published a letter it sent to a Dutch administrator of the domain name extensions .amsterdam and .frl. German Federal Court: BND’s Storing Of Phone Records Is Illegal. The German Federal Administrative Court in Leipzig ruled that Bundesnachrichtendienst (BND), the country’s foreign intelligence agency, is not allowed to store metadata records on international calls, such as phone numbers, for intelligence analysis purposes. 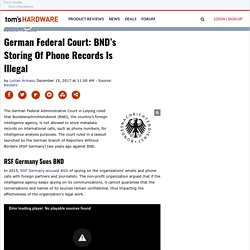 The court ruled in a lawsuit launched by the German branch of Reporters Without Borders (RSF Germany) two years ago against BND. RSF Germany Sues BND In 2015, RSF Germany accused BSD of spying on the organizations’ emails and phone calls with foreign partners and journalists. The non-profit organization argued that if the intelligence agency keeps spying on its communications, it cannot guarantee that the conversations and names of its sources remain confidential, thus impacting the effectiveness of the organization’s legal work. Error loading player: No playable sources found The nonprofit also said at the time that this sort of spying is disproportionate and illegal under German law.

CJEU case-law vs ECHR case-law. The Conclusions of Advocate General Kokott in C-73/16 Puškár were published on 30 March and remained under the radar, even though they deal with a couple of very important questions for EU data protection law that may have wide implications: effective judicial remedies, lawful grounds for processing other than consent, the right to access one’s own personal data. 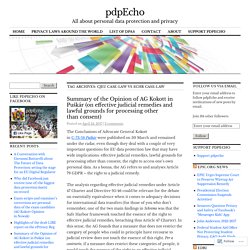 As a bonus, the AG refers to and analyses Article 79 GDPR – the right to a judicial remedy. The analysis regarding effective judicial remedies under Article 47 Charter and Directive 95/46 could be relevant for the debate on essentially equivalence when it comes to adequacy decisions for international data transfers (for those of you who don’t remember, one of the two main findings in Schrems was that the Safe Harbor framework touched the essence of the right to effective judicial remedies, breaching thus Article 47 Charter). Here is what you will further read: Note that all highlights from the post are made by the author. Amp.abc.net. Australian privacy advocates are concerned about a case that could see data held by American companies seized anywhere in the world. 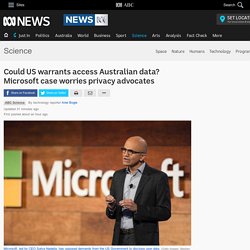 Key points: United States v. Microsoft Corp. will be heard in the Supreme CourtThe case asks whether an American email provider must comply with a US warrant, even if the provider stores the email abroadAustralian privacy advocates warn the case could set "a very dangerous precedent" TalkTalk fined again after customer data breach by Indian firm Wipro. TalkTalk has been fined £100,000 after data belonging to 21,000 customers was exposed to "rogue" staff at a call centre in India. The UK data watchdog found three employees from Indian tech firm Wipro, which TalkTalk hired to resolve complaints and network problems, had gained "unauthorised and unlawful access" to customer data in late 2014. The fine takes the firm's penalties to £500,000, including a record £400,000 fine last year over a hacking attack that saw information for 157,000 customers compromised in October 2015.

Forty Wipro employees had "unjustifiably wide-ranging" access to data belonging to between 25,000 and 50,000 TalkTalk customers, said the Information Commissioner's Office. Three of those accounts were then used to illegally access data of up to 21,000 customers. Record fines for company, senior staff and private investigators involved in ...

A firm of loss adjusters has been fined £50,000 for unlawfully disclosing personal data which had been obtained illegally by senior employees and rogue private investigators. A director and a senior member of staff at Kent-based Woodgate and Clark Ltd have also been sentenced to record financial penalties, along with the private investigators involved. The case was part of an ongoing ICO investigation into allegations of a criminal trade in confidential personal information involving corporate clients suspected of using the services of rogue private investigators. Elizabeth Denham, Information Commissioner, said: “The illegal trade in personal information is not only a criminal offence but a serious erosion of the privacy rights of UK citizens. Enforcement action. Company which made 75 million nuisance automated calls in four months is fined by the ICO.

Dirwy gan yr ICO i gwmni a wnaeth 75 miliwn o alwadau niwsans awtomataidd mewn pedwar mis A company which made 75 million nuisance calls in four months has been fined £350,000 by the Information Commissioner’s Office (ICO). Miss-sold Products UK Ltd made the automated marketing calls between 16 November 2015 and 7 March 2016. The calls contained recorded messages, primarily promoting PPI compensation claims, but the company did not have the recipients’ consent for making marketing calls, which is against the law. Blindly Fumbling for Consent: PECR and Optical Express - Panopticon Panopticon. PECR, long the runt of the information law litter, is beginning to take on a life of its own and, just as importantly, the ICO is beginning to really target spam texters and cold-callers.

Recent changes to the enforcement provisions of PECR only assist in this task. The ICO issued an Enforcement Notice against Optical Express in December 2014. Over 4,600 people registered concerns about Optical Express (Westfield) Limited in just seven months reporting the unsolicited messages to the mobile phone networks’ Spam Reporting Service indicating they had not given permission for the company to use their details for marketing. ICO warns UK firms to respect customers’ data wishes as it fines Flybe and Honda. Two companies have been fined a total of £83,000 for breaking the rules about how people’s personal information should be treated when sending marketing emails.

An investigation by the Information Commissioner’s Office (ICO) found Exeter-based airline Flybe deliberately sent more than 3.3 million emails to people who had told them they didn’t want to receive marketing emails from the firm. The emails, sent in August 2016 by Flybe, with the title ‘Are your details correct?’ Advised recipients to amend any out of date information and update any marketing preferences. The email also said that by updating their preferences, people may be entered into a prize draw. Telecoms: Commission launches case against UK over privacy and personal data protection.

Brussels, 14 April 2009 “Technologies like internet behavioural advertising can be useful for businesses and consumers but they must be used in a way that complies with EU rules. These rules are there to protect the privacy of citizens and must be rigorously enforced by all Member States," said EU Telecoms Commissioner Viviane Reding. Art 8 - Charter of Fundamental Rights - Privacy. Ep-study-ecj-echr. Applis e-santé : le juge européen élargit la qualification de dispositif médical. Third country law in the CJEU’s data protection judgments. By Christopher Kuner Introduction Much discussion of foreign law in the work of the Court of Justice of the European Union (CJEU) has focused on how it deals with the rules, principles, and traditions of the EU member states.