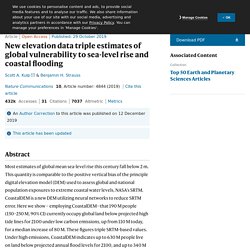 Coastal defenses are not considered, but hydrologic connectivity to the ocean is otherwise enforced using connected components analysis. Figure 1 presents permanent inundation surfaces at select locations for median K17/RCP 8.5/2100. Future population growth and migration are also not considered; rather, we use 2010 (essentially current) population density data from Landscan13 to indicate threats relative to present development patterns. Permanent inundation surfaces predicted by CoastalDEM and SRTM given the median K17/RCP 8.5/2100 sea-level projection. National CoastalDEM versus SRTM by country.

Validation. Rising Seas Will Erase More Cities by 2050, New Research Shows. Rising seas could affect three times more people by 2050 than previously thought, according to new research, threatening to all but erase some of the world’s great coastal cities. 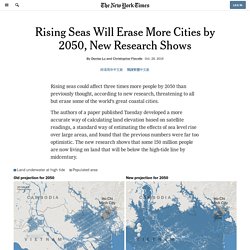 The authors of a paper published Tuesday developed a more accurate way of calculating land elevation based on satellite readings, a standard way of estimating the effects of sea level rise over large areas, and found that the previous numbers were far too optimistic. The new research shows that some 150 million people are now living on land that will be below the high-tide line by midcentury. Land underwater at high tide Southern Vietnam could all but disappear. The first map shows earlier expectations of submerged land by 2050. More than 20 million people in Vietnam, almost one-quarter of the population, live on land that will be inundated. Standard elevation measurements using satellites struggle to differentiate the true ground level from the tops of trees or buildings, said Scott A. The stunning winners of an architects’ competition to draw fairy tales about the future. 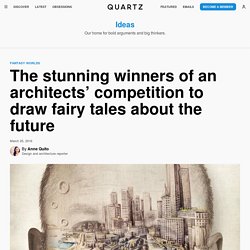 Since 2013, Blank Space, an ideas platform for architecture, has been hosting “Fairy Tales,” an open call contest for short stories told through illustration and words about architecture. The fiction competition has evolved to become a way for architects, engineers, and students to wrestle with real life concerns about the practice, explained Blank Space founders Matthew Hoffman and Francesca Giuliani to Arch Daily last year.

Entries this year tackled topics ranging from globalization, technology-fatigue, displacement and disillusionment. “Judges of the competition are most impressed by how architects and designers are able to leverage their skills to imagine the future that is already upon us.” says Hoffman to Quartz. “These futures fall outside of the traditional architecture profession, but in many ways are more ‘grounded’ than anything else out there.” “Welcome to the 5th Façade” Olson Kundig “Parisian Lullaby” Hagai Ben Naim. Affective Perspective. X-ray – a fascinating discovery that changed the world - German Röntgen Museum. Revealing art secrets with science - Fondazione Bracco. 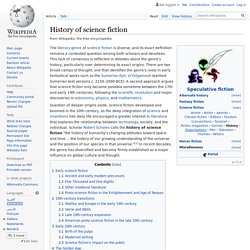 This lack of consensus is reflected in debates about the genre's history, particularly over determining its exact origins. There are two broad camps of thought, one that identifies the genre's roots in early fantastical works such as the Sumerian Epic of Gilgamesh (earliest Sumerian text versions c. 2150–2000 BCE). A second approach argues that science fiction only became possible sometime between the 17th and early 19th centuries, following the scientific revolution and major discoveries in astronomy, physics, and mathematics. Question of deeper origins aside, science fiction developed and boomed in the 20th century, as the deep integration of science and inventions into daily life encouraged a greater interest in literature that explores the relationship between technology, society, and the individual.