PEN America’s Guide on COVID-19 and Disinformation. Building Media Literacy Skills During a Pandemic As the coronavirus pandemic heightens nerves, disinformation—defined as information being spread with the intention to mislead–has found fertile ground. 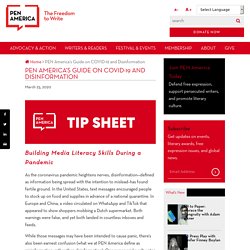 In the United States, text messages encouraged people to stock up on food and supplies in advance of a national quarantine. In Europe and China, a video circulated on WhatsApp and TikTok that appeared to show shoppers mobbing a Dutch supermarket. Both warnings were false, and yet both landed in countless inboxes and feeds. While those messages may have been intended to cause panic, there’s also been earnest confusion (what we at PEN America define as misinformation, rather than disinformation). Whether out of malice or genuine alarm, false stories are continuing to circulate. 1.

Some stories look like news but are actually opinion pieces. 2. “Daily Buzz Live” may sound like a legit news site, but there are countless examples of bad actors creating fake news outlets that sound real. 3. 4. Los Angeles Times - Page unavailable in your region. Profits and Pride at Stake, the Race for a Vaccine Intensifies. WASHINGTON — Four months after a mysterious new virus began its deadly march around the globe, the search for a vaccine has taken on an intensity never before seen in medical research, with huge implications for public health, the world economy and politics. 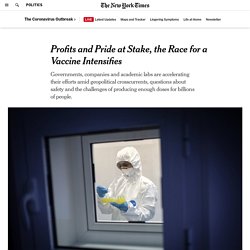 Seven of the roughly 90 projects being pursued by governments, pharmaceutical makers, biotech innovators and academic laboratories have reached the stage of clinical trials. With political leaders — not least President Trump — increasingly pressing for progress, and with big potential profits at stake for the industry, drug makers and researchers have signaled that they are moving ahead at unheard-of speeds. But the whole enterprise remains dogged by uncertainty about whether any coronavirus vaccine will prove effective, how fast it could be made available to millions or billions of people and whether the rush — compressing a process that can take 10 years into 10 months — will sacrifice safety.

George Q. Dr. Dr. David E. Regional Monitoring Dashboard. Description of Metrics: These metrics have been established based on guidance from the Center for Disease Control and Prevention, the World Health Organization, the U.S. 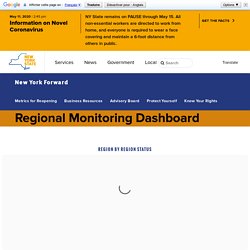 Department of State, and other public health experts. For more information, read the NY Forward Book. Metric #1—Decline in Total Hospitalizations. Region must show a sustained decline in the three-day rolling average of total net hospitalizations (the total number of people in the hospital each day) over the course of a 14-day period. Alternatively, regions can satisfy this metric if the daily net increase in total hospitalizations (measured on a 3-day rolling average) has never exceeded 15.

With New Hot Spots Emerging, No Sign of a Respite. In New York City, the daily onslaught of death from the coronavirus has dropped to half of what it was. 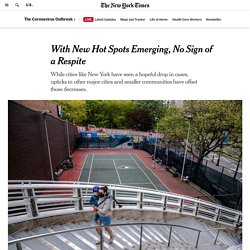 In Chicago, a makeshift hospital in a lakefront convention center is closing, deemed no longer needed. And in New Orleans, new cases have dwindled to a handful each day. Yet across America, those signs of progress obscure a darker reality. The country is still in the firm grip of a pandemic with little hope of release. For every indication of improvement in controlling the virus, new outbreaks have emerged elsewhere, leaving the nation stuck in a steady, unrelenting march of deaths and infections.

As states continue to lift restrictions meant to stop the virus, impatient Americans are freely returning to shopping, lingering in restaurants and gathering in parks. Coronavirus in America now looks like this: More than a month has passed since there was a day with fewer than 1,000 deaths from the virus. Rural towns that one month ago were unscathed are suddenly hot spots for the virus. Hong Kong Public Libraries - Latest arrangements on services of Hong Kong Public Libraries. The services of public libraries will resume gradually. 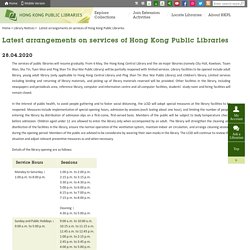 From 6 May, the Hong Kong Central Library and the six major libraries (namely City Hall, Kowloon, Tsuen Wan, Sha Tin, Tuen Mun and Ping Shan Tin Shui Wai Public Library) will be partially reopened with limited services. Library facilities to be opened include adult library, young adult library (only applicable to Hong Kong Central Library and Ping Shan Tin Shui Wai Public Library) and children's library. Coronavirus Live News Updates. The number of total deaths in seven states hit hard by the coronavirus was nearly 50 percent higher than normal over a five-week span during the pandemic, according to new statistics released by the Centers for Disease Control and Prevention on Tuesday. 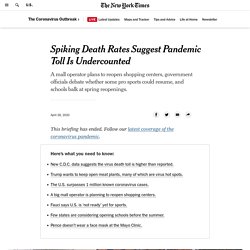 There were 9,000 more deaths in those states than the official counts of coronavirus deaths suggest. The newly released data is partial and most likely undercounts the recent death toll, but it still illustrates how the virus is causing a surge in deaths in the places it has struck. From March 8 through April 11, provisional deaths from all causes spiked far above their normal levels in Colorado, Illinois, Maryland, Massachusetts, Michigan, New York and New Jersey. See Which States Are Reopening and Which Are Still Shut Down. Coronavirus Map: Tracking the Global Outbreak.