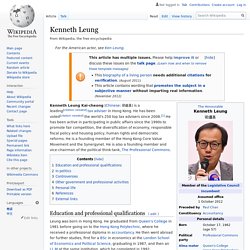 He has been voted[citation needed] the world's 250 top tax advisers since 2008.[1] He has been active in participating in public affairs since the 1990s to promote fair competition, the diversification of economy, responsible fiscal policy and housing policy, human rights and democratic reforms. He is a founding member of the Hong Kong Core Value Movement and the Synergynet. He is also a founding member and vice-chairman of the political think-tank, The Professional Commons. Education and professional qualifications[edit] Leung was born in Hong Kong. Leung holds the professional qualifications of FCPA, Chartered Accountant, UK Chartered Tax Adviser, and Hong Kong Certified Tax Adviser. In politics[edit] Controversies[edit] In 2013, Leung was one of eight legislators treated by Cathay Pacific to a six-day trip to France to tour Airbus factories. Other government and professional activities[edit] Can we trust our environmental impact assessment system? EJINSIGHT - ejinsight.com.

Last month, a wildlife conservation organization discovered a massive amount of mud leaking out from a fish pond near Tam Kon Chau Road at the Mai Po Nature Reserve. 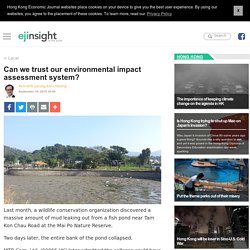 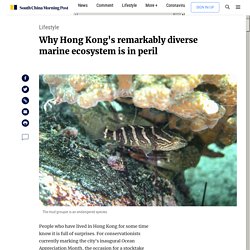 "The diversity of life you find here is because we're sitting on the edge of two worlds: we have a seasonal shift from a temperate marine ecosystem to a tropical ecosystem every year, so that variability increases the attractiveness of Hong Kong to a wider variety of species," Baker says. Post Magazine Newsletter. Ancient DNA reveals how long fish have been living in our lakes. Researchers at the Department of Ecology and Environmental Science at Umeå University have recently found that fish DNA binds to lake sediment, forming a natural archive that can reveal when certain fish species colonized lakes after the glacial period. 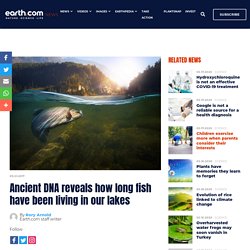 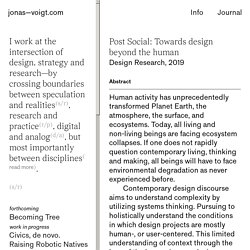 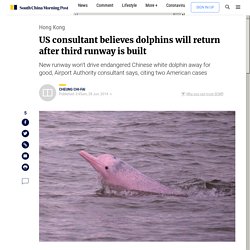 He said both bays had lost their populations of bottlenose dolphins in the last century, but they had returned when the environment was improved. In San Francisco, he said reclamation and dredging from the 1930s to the 1980s drove dolphins away. A large military presence, including a chain-link fence closing off the bay, caused problems during the second world war. The toxic killers in our air too small to see - BBC Future. Epistemic, ontological and aleatory risk « Critical Uncertainties.

What do an eighteenth century mathematician and a twentieth century US Secretary of Defence have to do with engineering and risk? 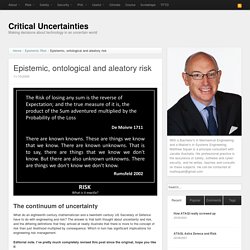 The answer is that both thought about uncertainty and risk, and the differing definitions that they arrived at neatly illustrate that there is more to the concept of risk than just likelihood multiplied by consequence. Which in turn has significant implications for engineering risk management. Editorial note. New Materialism. In critical theory, ecology is a constitutive concept that takes as a starting point the insight of ecological science, which can be expressed, with Bateson as "the unit of survival is organism plus environment" (1972, p. 489). 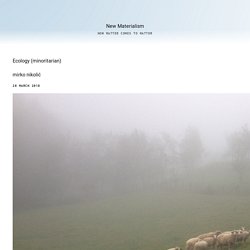 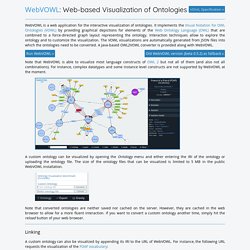 It implements the Visual Notation for OWL Ontologies (VOWL) by providing graphical depictions for elements of the Web Ontology Language (OWL) that are combined to a force-directed graph layout representing the ontology. Interaction techniques allow to explore the ontology and to customize the visualization. The VOWL visualizations are automatically generated from JSON files into which the ontologies need to be converted. Ontology and Data Science. Deep Learning for the Masses (… and The Semantic Layer) Well do you want to know the secret? 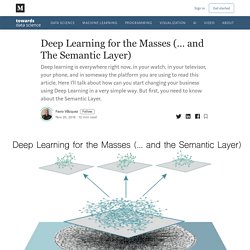 Click to learn more about author Mike Brody. The end of theory in science? The End of Theory: The Data Deluge Makes the Scientific Method Obsolete. But faced with massive data, this approach to science — hypothesize, model, test — is becoming obsolete. Consider physics: Newtonian models were crude approximations of the truth (wrong at the atomic level, but still useful). Color wheel, a color palette generator. Species Distribution Modeling. Without consistent, predictable, up-to-date, and scale-appropriate information to guide species conservation decisions, conservation efforts cannot be easily targeted where they will confer the greatest benefit.

At the same time, a lack of knowledge about where species are unlikely to occur can result in resources being diverted to analyzing potential impacts to at-risk species that may never occur on the ground. By providing better information on where at-risk and regulated species are likely to be found, SDMs provide cost-savings to government and industry while benefiting biodiversity. These benefits include: Greater efficiency and less uncertainty in implementation of the Endangered Species Act (ESA).

More precise habitat maps can prevent the need for costly ESA consultations by pinpointing areas where impacts to endangered species are unlikely, increasing trust from the regulated community and reducing litigation. Shibboleth Authentication Request. Biomagnification. Any concentration of a toxin in tissues of tolerant organisms at successively higher levels in a food chain This article includes a list of references, but its sources remain unclear because it has insufficient inline citations. Please help to improve this article by introducing more precise citations.