Original veda stolen by british. The Myth of Aryan Invasion of India. By Dr. 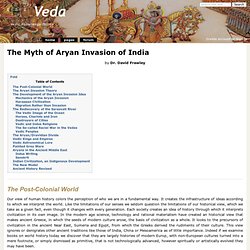 David Frawley Our view of human history colors the perception of who we are in a fundamental way. It creates the infrastructure of ideas according to which we interpret the world. Like the limitations of our senses we seldom question the limitations of our historical view, which we take as a given fact, even though it changes with every generation. Each society creates an idea of history through which it interprets civilization in its own image.

In the post-colonial era, however, we are now questioning this Eurocentric and materialistic view of humanity. A number of racial, ethnic and religious groups have challenged their negative portrayal in modern Eurocentric historical accounts. India is another country whose history has been greatly distorted by a colonial and materialistic European bias. In this article we will examine important new discoveries in regard to ancient India that show the need for a radical reexamination of the history of the region. ISAAC NEWTON , THE CALCULUS THIEF. The whole world is under the impression that Isaac Newton is the father of Calculus.The truth is that Calculus was understood and practised in Malabar of India which had the School of Astronomy and Mathematics , even before Christ was born. 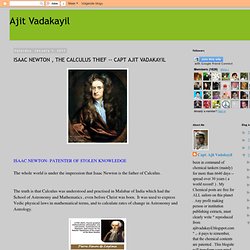 It was used to express Vedic physical laws in mathematical terms, and to calculate rates of change in Astronomy and Astrology. Calicut my hometown was the Capital of Malabar, where Vasco da Gama landed in 1498. St Thomas ( disciple of Jesus ) had died in Malabar.The great Pyramids of Egypt was designed by architects proficient in Astronomy and Vaastu from Calicut, with tunnels from the Pharaoh's chamber at 90 degrees between Alnilam of Orion belt and the North star..Aryabhatta born in Kerala ( my home state ) in 2700 BC, was one of the early members of this school.

Aryabhatta was the first to calculate Pi of 3.1416 and the solar year of 365.358 days . Calculus was developed and many books were written . P. Now from the similar triangles PTr and PMO. How the Scientists Stole the Vedas. By Abhaya Mudra Dasi “There are unlimited Vaikuntha planets in the spiritual sky, and the ratio of these planets to the material planets in the material sky is three to one. 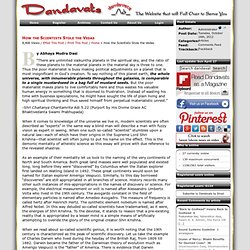 Thus the poor materialist is busy making political adjustments on a planet that is most insignificant in God’s creation. To say nothing of this planet earth, the whole universe, with innumerable planets throughout the galaxies, is comparable to a single mustardseed in a bag full of mustard seeds. But the poor materialist makes plans to live comfortably here and thus wastes his valuable human energy in something that is doomed to frustration. Instead of wasting his time with business speculations, he might have sought the life of plain living and high spiritual thinking and thus saved himself from perpetual materialistic unrest.” 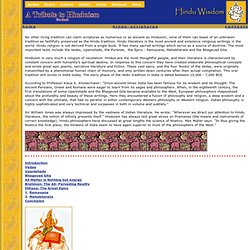 A theoretical physicist and the Supervising Scientist Manhattan Project, the developer of the atomic bomb said: "Access to the Vedas is the greatest privilege this century may claim over all previous centuries. Modern man is a diminished man. Despite the superficial excitements of our high-tech world, life for most has become a flat, stale, and joyless thing. It is joyless because we have forgotten what life is supposed to be. Dr. "The Vedas stand in all their might and majesty as the very source and bedrock of Hindu civilization. (source: Essays on Hinduism - By Karan Singh p. 50. Prof. "The Vedas represent the pinnacle of the oldest literature of India.

Pandit Madan Mohan Malviya (1861 – 1946) was a great Indian nationalist and a true propounder of Hindu culture and often called as the Teacher of the Nation, has said: "The Vedas are the oldest scriptures in the world. (source: The Essence of the Vedas - By Dr. Top of Page A.