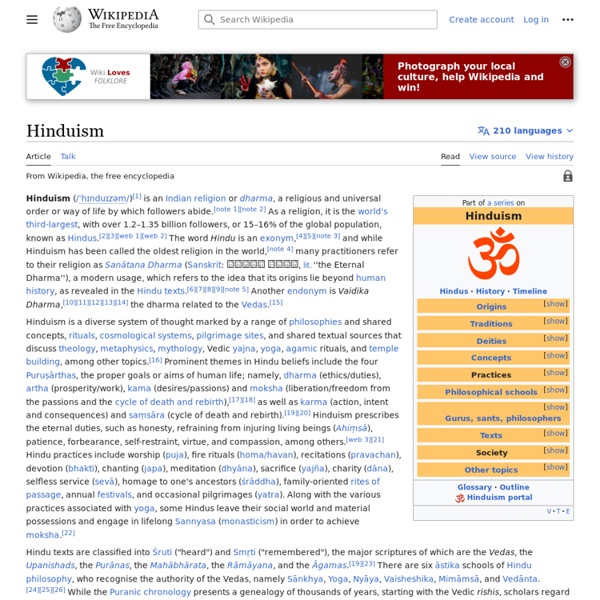 Hinduism is the dominant religion, or way of life,[note 1] in South Asia, most notably India. It includes Shaivism, Vaishnavism and Shaktism among numerous other traditions, and a wide spectrum of laws and prescriptions of "daily morality" based on karma, dharma, and societal norms. Hinduism is a categorisation of distinct intellectual or philosophical points of view, rather than a rigid, common set of beliefs. Hinduism, with about one billion followers[web 1] is the world's third largest religion, after Christianity and Islam. Hinduism has been called the "oldest religion" in the world,[note 2] and some practitioners refer to it as Sanātana Dharma, "the eternal law" or the "eternal way"[3] beyond human origins. Western scholars regard Hinduism as a fusion[note 3] or synthesis[note 4] of various Indian cultures and traditions,[6][note 5] with diverse roots[note 6] and no single founder. Etymology Definitions Colonial influences Indigenous understanding Sanātana Dharma Growing Hindu identity

History of Ancient India Early Historic Period Vedic Period: The Aryans were the first to invade the country. They came out of the North in about 1500 BC and brought with them strong cultural traditions. Sanskrit, one of the most ancient languages spoken by them, was used in the first documentation of the Vedas, which date back to the 12th century BC and are believed to be oldest scriptures still in use. Āstika and nāstika The various definitions for āstika and nāstika philosophies has been disputed since ancient times, and there is no consensus.[6][8] Buddhism is considered to be nāstika, but the Gautama Buddha is considered an avatar of Vishnu in some Hindu traditions.[9] The most studied Āstika schools of Indian philosophies, sometimes referred to as orthodox schools, are six: Nyāyá, Vaiśeṣika, Sāṃkhya, Yoga, Mīmāṃsā, and Vedānta. The most studied Nāstika schools of Indian philosophies, sometimes referred to as heterodox schools, are four: Buddhism, Jainism, Cārvāka, and Ājīvika.[10][11] This orthodox-heterodox terminology is a construct of Western languages, and lacks scholarly roots in Sanskrit. Recent scholarly studies[6] state that there have been various heresiological translations of Āstika and Nāstika in 20th century literature on Indian philosophies, but quite many are unsophisticated and flawed. Etymology[edit] Classification of schools[edit]

Gurjara-Pratihara The Gurjar Pratihara (गुर्जर-प्रतिहार), often simply called Pratihara Empire, was an imperial Indian dynasty that ruled much of Northern India from the 8th to the 11th centuries. At its peak of prosperity and power (c. 836–910), the Gurajara-Pratihara Empire rivaled or even exceeded the Gupta Empire in the extent of its territory. The Pratihara Empire started to decline in the early 10th century after it had to face several invasions by the south Indian Rashtrakuta dynasty.[1] Kannauj was the capital of imperial Gurjara Pratiharas.[2][3][4] The Gurjara Pratihara rulers in the tenth century was entitled as Maharajadhiraja of Āryāvarta ("Great King over Kings of the abode of the Aryans". i.e. Lords of Northern India).[5][6] Etymology[edit]

Charvaka Charvaka (IAST: Cārvāka), originally known as Lokāyata and Bṛhaspatya, is the ancient school of Indian materialism.[1] Charvaka holds direct perception, empiricism, and conditional inference as proper sources of knowledge, embraces philosophical skepticism and rejects Vedas, Vedic ritualism, and supernaturalism.[a] Ajita Kesakambali is credited as the forerunner of the Charvakas, while Brihaspati is usually referred to as the founder of Charvaka or Lokāyata philosophy. Much of the primary literature of Charvaka, the Barhaspatya sutras (ca. 600 BCE), are missing or lost. Its teachings have been compiled from historic secondary literature such as those found in the shastras, sutras, and the Indian epic poetry as well as in the dialogues of Gautama Buddha and from Jain literature.

History of India The history of India begins with evidence of human activity of Homo sapiens, as long as 75,000 years ago, or with earlier hominids including Homo erectus from about 500,000 years ago.[1] The Indus Valley Civilization, which spread and flourished in the northwestern part of the Indian subcontinent from c. 3300 to 1300 BCE in present-day Pakistan and northwest India, was the first major civilization in South Asia.[2] A sophisticated and technologically advanced urban culture developed in the Mature Harappan period, from 2600 to 1900 BCE.[3] This civilization collapsed at the start of the second millennium BCE and was later followed by the Iron Age Vedic Civilization, which extended over much of the Indo-Gangetic plain and which witness the rise of major polities known as the Mahajanapadas. In one of these kingdoms, Magadha, Mahavira and Gautama Buddha were born in the 6th or 5th century BCE and propagated their Shramanic philosophies. Prehistoric era[edit] Stone Age[edit]

Smriti Smriti (Sanskrit: स्मृति, IAST: Smṛti), literally "that which is remembered" are a body of Hindu texts usually attributed to an author, traditionally written down but constantly revised, in contrast to Śrutis (the Vedic literature) considered authorless, that were transmitted verbally across the generations and fixed.[1] Smriti is a derivative secondary work and is considered less authoritative than Sruti in Hinduism, except in the Mimamsa school of Hindu philosophy.[2][3][4] The authority of smriti accepted by orthodox schools, is derived from that of shruti, on which it is based.[5][6] Each Smriti text exists in many versions, with many different readings.[1] Smritis were considered fluid and freely rewritten by anyone in ancient and medieval Hindu tradition.[1][3] Etymology[edit] In scholarly literature, Smriti is also spelled as Smṛti.[15] Texts[edit] Smrtis represent the remembered, written tradition in Hinduism.[8] The Smrti literature is a vast corpus of derivative work.

Gupta Empire The high points of this cultural creativity are magnificent architecture, sculptures and paintings.[7] The Gupta period produced scholars such as Kalidasa, Aryabhata, Varahamihira, Vishnu Sharma and Vatsyayana who made great advancements in many academic fields.[8][9] Science and political administration reached new heights during the Gupta era.[10] Strong trade ties also made the region an important cultural center and set the region up as a base that would influence nearby kingdoms and regions in Burma, Sri Lanka, and Southeast Asia.[11] The earliest available Indian epics are also thought to have been written around this period. The empire gradually declined because of many factors such as substantial loss of territory and imperial authority caused by their own erstwhile feudatories and the invasion by the Huna peoples from Central Asia.[12] After the collapse of the Gupta Empire in the 6th century, India was again ruled by numerous regional kingdoms. Origin of the Guptas[edit]

Vedas Ancient scriptures of Hinduism The Vedas are ancient Sanskrit texts of Hinduism. Above: A page from the Atharvaveda. Etiquette of Indian dining As in many cultures, proper habits of eating and drinking are very important and widely respected parts of Indian culture, local customs, traditions, and religions. Proper table manners vary from culture to culture, although there are always a few basic rules that are important to follow. Etiquette should be observed when dining in any Indian household or restaurant, though the acceptable standards depend upon the situation.[1][2] Cutlery[edit] Śruti Authoritative scripture of Hinduism, created by Rishis (sages), after inspired creativity Shruti or Shruthi (Sanskrit: श्रुति, IAST: Śruti, IPA: [ɕrʊtɪ]) in Sanskrit means "that which is heard" and refers to the body of most authoritative, ancient religious texts comprising the central canon of Hinduism.[1] Manusmriti states that Śrutistu vedo vigneyah (Sanskrit: श्रुतिस्तु वेदो विज्ञेय:, lit. means "Know that Vedas are Śruti"). Thus, it includes the four Vedas including its four types of embedded texts—the Samhitas, the early Upanishads, the Brahmanas and the Aranyakas.[2][3]

Culture of India The culture of India refers to the way of life of the people of India. India's languages, religions, dance, music, architecture, food, and customs differ from place to place within the country. The Indian culture, often labelled as an amalgamation of several cultures, spans across the Indian subcontinent and has been influenced by a history that is several millennia old.[1][2] Many elements of India's diverse cultures, such as Indian religions, yoga, and Indian cuisine, have had a profound impact across the world. Religions[edit] Music of India The music of India includes multiple varieties of classical music, folk music, filmi, Indian rock and Indian pop. India's classical music tradition, including Hindustani music and Carnatic, has a history spanning millennia and developed over several areas. Music in India began as an integral part of socio-religious life. History[edit] The 30,000 years old paleolithic and neolithic cave paintings at the UNESCO world heritage site at Bhimbetka rock shelters in Madhya Pradesh shows music instruments and dance.[1]