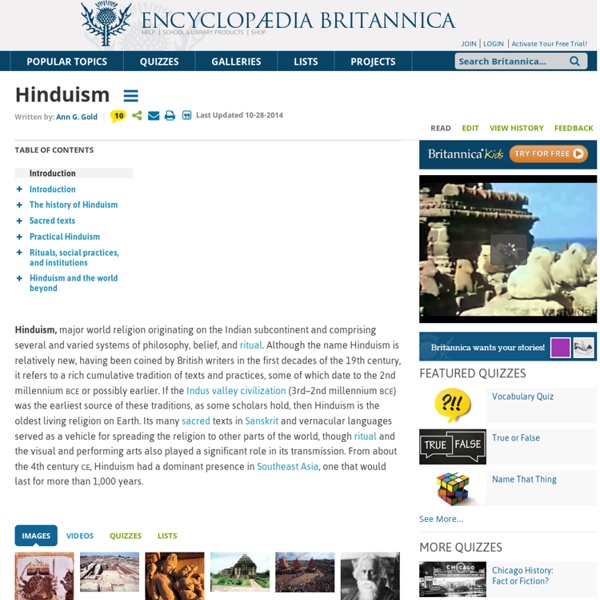 Hinduism, major world religion originating on the Indian subcontinent and comprising several and varied systems of philosophy, belief, and ritual. Although the name Hinduism is relatively new, having been coined by British writers in the first decades of the 19th century, it refers to a rich cumulative tradition of texts and practices, some of which date to the 2nd millennium bce or possibly earlier. If the Indus valley civilization (3rd–2nd millennium bce) was the earliest source of these traditions, as some scholars hold, then Hinduism is the oldest living religion on Earth. Its many sacred texts in Sanskrit and vernacular languages served as a vehicle for spreading the religion to other parts of the world, though ritual and the visual and performing arts also played a significant role in its transmission. From about the 4th century ce, Hinduism had a dominant presence in Southeast Asia, one that would last for more than 1,000 years. Introduction The term Hinduism Doctrine

Swastika - Hindu Symbols 157Google + Swastika symbol. The swastika (Sanskrit svastika, "all is well") is a cross with four arms of equal length, with the ends of each arm bent at a right angle. The swastika is an ancient symbol that has been found worldwide, but it is especially common in India. The swastika is most commonly used as a charm to bring good fortune (in which case the arms are bent clockwise), but it has a variety of religious meanings as well, which are described below. Religious symbolism Swastika banner being hung for an Indian wedding, Mumbai. Indian man's swastika ring. Swastika rangoli (decoration welcoming visitors to a home). Bricks carved with a swastika and script, India. Graffiti in Jamalpur, India. The right-hand swastika is one of the 108 symbols of the Hindu god Vishnu as well as a symbol of the sun and of the Hindu sun god, Surya. The left-hand swastika (called a sauvastika) usually represents the terrifying Hindu goddess Kali, night and magic. Use by the Nazis Recommended: Sources

Swastika - Meaning of the Swastika Today in the West, the swastika is identified almost exclusively with Nazi anti-Semitism. This makes it difficult for other groups to use the symbol to represent more benevolent concepts, which the symbol has frequently embodied for thousands of years. Hinduism The swastika remains a major symbol of Hinduism, representing eternity, particularly the eternal and ever-present force of the Brahman. It is also a symbol of the present of goodness, as well as representing strength and protection. The message of eternity in the swastika is also widely used by Buddhists. Some of the oldest examples of swastikas in the world can be found in India. The symbol commonly shows up in religious texts, as well as the thresholds of buildings. Jainism The swastika is a symbol of rebirth and the four types of beings that one can be born into: heavenly, human, animal or hellish. Not only does the swastika show up in holy books and doorways, like that of the Hindus, but it is commonly used within ritual as well.