IRIS Earthquake Sci sur Twitter : "When an #earthquake occurs, seismologists create graphics of focal mechanisms (informally referred to as beach balls) to show the faulting motions that produce the earthquake. Gif available at htt. How does the local soil and geology change the shaking that's felt from an #earthquake? Revolution in quake detection technology. Image copyright Science Photo Library Earthquakes may now become easier to detect than ever before, with the aid of developing technology. 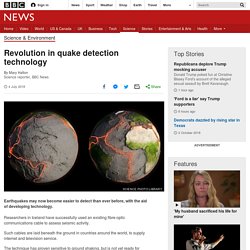 Researchers in Iceland have successfully used an existing fibre-optic communications cable to assess seismic activity. Such cables are laid beneath the ground in countries around the world, to supply internet and television service. The technique has proven sensitive to ground shaking, but is not yet ready for widespread use. It joins a series of recent advances in earthquake sensing, including smartphone apps and more affordable detection hardware.

Image copyright Getty Images How does it work? Earthquake activity is usually monitored by seismometers - carefully calibrated and expensive devices placed at sensitive locations. A laser pulse sent down a single fibre of the cable was sufficient to determine whether there were any disturbances along its length. Image copyright USGS/Science Photo Library "It's almost as good as a seismometer," says Dr Jousset. The Palmdale Bulge: A Geo-Crisis That Likely Never Existed - Rocky Planet : Rocky Planet. The revolution in how we survey and image the surface of the Earth has had profound impacts on the geosciences. 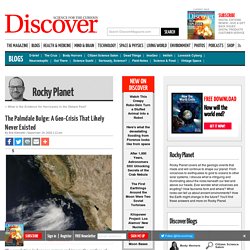 This shouldn’t be a shock to anyone as that’s what geoscientists do — study the Earth — and as we get more and better data on the planet and its surface, the better our understanding will become (and the more questions we can ask). Few technological leaps have been more important to geosciences than satellite imaging of the Earth. That is more than just taking cool pictures of the planet, but also collecting location and elevation data of the surface … and being able to do so in sub-centimeter precision and repeatedly over intervals of days (or less). Combine that with land-based tools like LIDAR (Light Detection and Ranging), and suddenly we can notice very small changes in the Earth’s surface. Dump all this data in a geographic information system (GIS) and we can really start picking apart almost every up and down and slide and whatever comes along. And now S - Waves! Much more civilised @peteloader1 #gsskeele…

This earthquake dashboard pulls information from the @USGS PAGER program. The Firefly map style really makes the data pop. Check it out here. Stephen Hicks sur Twitter : "Back to science. Two neat papers just out in @NatureGeosci throwing new light on the #earthquake nucleation process. One paper from the 1999 M7.6 Izmit, Turkey earthquake ); the other about a couple of. David Bressan sur Twitter : "June 3, 1810, birthday of Irish engineer & self-educated geologist Robert Mallet. He published the first seismicity map of the Mediterranean area and an extensive report on earthquakes in Italy, discovering seismic belts (plat.

Www.forbes. ISC sur Twitter : "We often see earthquakes animations but without the data from seismic stations we would not be able to locate seismic events. Here it is shown the evolution of the seismic global network used to relocate the earthquakes in the ISC-GEM C. Very neat demonstration showing the four quarters of an earthquake rupture (even without 100% instrumental coverage).… Dr. Lucy Jones sur Twitter : "Earthquakes don’t happen at epicenters. Rupture begins at a hypocenter & moves down a fault, releasing energy as it passes. A bigger quake, moves across a longer fault & lasts for a longer time. You can be a long way from the. The latest in earthquake detection? Artificial intelligence. In Brief ConvNetQuake is the first neural network designed to detect and locate earthquakes using seismograms. 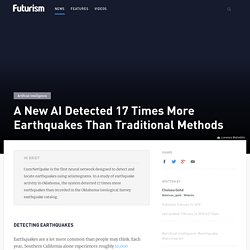 In a study of earthquake activity in Oklahoma, the system detected 17 times more earthquakes than recorded in the Oklahoma Geological Survey earthquake catalog. Detecting Earthquakes Earthquakes are a lot more common than people may think. Each year, Southern California alone experiences roughly 10,000 earthquakes, and they’re happening more frequently in the central United States, possibly due to wastewater injection. While we may not feel a large percentage of these earthquakes, it’s important that we understand them. It could also help us figure out how to predict future earthquakes of all sizes, which will improve how communities respond to earthquakes. Now, a research team led by deep learning scientist Thibaut Perol has found a way to use artificial intelligence (AI) to improve earthquake detection.

Innovating With AI. The latest in earthquake detection? Artificial intelligence #automation #technology… Analysis of major earthquakes supports stress reduction assumptions. A comprehensive analysis of 101 major earthquakes around the Pacific ring of fire between 1990 and 2016 shows that most of the aftershock activity occurred on the margins of the areas where the faults slipped a lot during the main earthquakes. 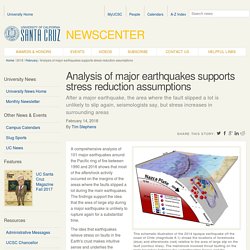 Building Resonance: Why do some buildings fall in earthquakes? California is overdue for another giant earthquake. .Whispering quakes: Our fast & accurate magnitude estimates are due to the discovery of a little-known seismic wave arrival named the "W-phase. *****A decade of quakes in NZ. Smithsonian. How cool is this? Luke Jerram makes 3D-printed sculptures from earthquake seismograms. Can changes in Earth’s rotation be used to forecast earthquakes? *****Upsurge in big earthquakes predicted for 2018 as Earth rotation slows. ...and here’s how we confirmed the solution in less than a minute from the time our system notified us. #earthquake #rapidresponse.