Google, democracy and the truth about internet search 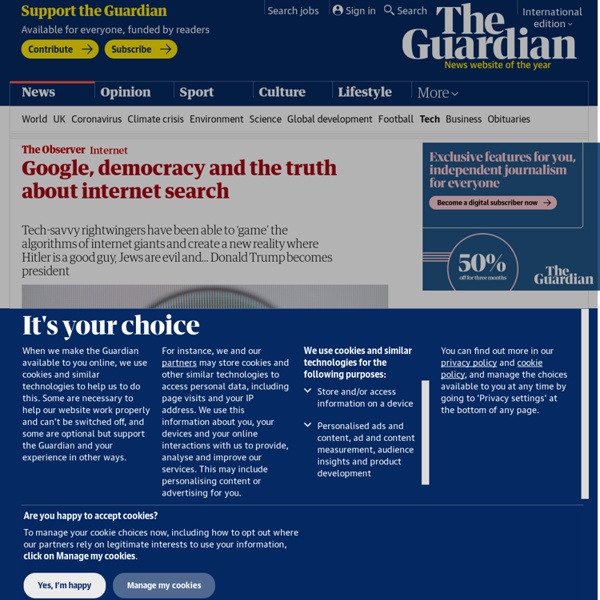 Here’s what you don’t want to do late on a Sunday night. You do not want to type seven letters into Google. That’s all I did. I typed: “a-r-e”. And then “j-e-w-s”. Since 2008, Google has attempted to predict what question you might be asking and offers you a choice. Are Jews evil? Google is search. The sixth is from Yahoo Answers: “Why are Jews so evil?” There’s one result in the 10 that offers a different point of view. I feel like I’ve fallen down a wormhole, entered some parallel universe where black is white, and good is bad. Stories about fake news on Facebook have dominated certain sections of the press for weeks following the American presidential election, but arguably this is even more powerful, more insidious. He came across a similar instance in 2006 when, “If you typed ‘Jew’ in Google, the first result was jewwatch.org. Google is knowledge. Next I type: “a-r-e m-u-s-l-i-m-s”. Jews are evil. He’s surprised too. Google isn’t just a search engine, of course. Like a cancer?

I’ve Been Reporting on MS-13 for a Year. Here Are the 5 There’s one thing everyone can agree with President Donald Trump on about the street gang MS-13: The group specializes in spectacular violence. Its members attack in groups, in the woods, at night, luring teens to their deaths with the promise of girls or weed. One Long Island boy told me he doesn’t go to parties anymore because he worries any invitation could be a trap. A victim’s father showed me a death certificate that said his son’s head had been bashed in, then lowered his voice and added that the boy’s bones had been marked by machete slashes, but he didn’t want the mother to know that. A teenager who has left the gang told me he considers himself dead already, and is just trying to make sure MS-13 doesn’t kill his family.

How to Convince Someone When Facts Fail Have you ever noticed that when you present people with facts that are contrary to their deepest held beliefs they always change their minds? Me neither. In fact, people seem to double down on their beliefs in the teeth of overwhelming evidence against them. The reason is related to the worldview perceived to be under threat by the conflicting data. The tricks propagandists use to beat science Back in the 1950s, health professionals became concerned that smoking was causing cancer. Then, in 1952, the popular magazine Reader’s Digest published “Cancer by the Carton,” an article about the increasing body of evidence that proved it. The article caused widespread shock and media coverage.

Fact-checking an immigration meme that's been circulating for more than a decade A viral image on social media -- one that’s critical of illegal immigration -- has been circulating for years. The list of claims first circulated in the form of a chain email in 2006, according to Snopes.com. Six years later, we checked several of the claims ourselves. Column: Do we need librarians now that we have the internet? For better or worse, the digital age forces experts to make the case that a Google search doesn’t replace the librarian, and WebMD doesn’t replace the doctor, writes Robert Graboyes of the Mercatus Center. Photo by Atef Hassan/Reuters Observe librarians, and you’ll learn quite a bit about 21st century physicians. "fake news" not new 2 clicks Donald Trump may well be remembered as the president who cried “fake news.” It started after the inauguration, when he used it to discredit stories about the size of the crowd at his inauguration. He hasn’t let up since, labeling any criticism and negative coverage as “fake.” Just in time for awards season, he rolled out his “Fake News Awards” and, in true Trumpian fashion, it appears he is convinced that he invented the term.

Sorting the Real Sandy Photos From the Fakes With Hurricane Sandy approaching the New York metro area, the nation's eyes are turning to its largest city. Photos of storms and flooding are popping up all over Twitter, and while many are real, some of them -- especially the really eye-popping ones -- are fake. This post, which will be updated over the next couple of days, is an effort to sort the real from the unreal. The AI disruption wave Rudina Seseri Crunch Network Contributor Rudina Seseri is founder and managing partner at Glasswing Ventures, an Entrepreneur-In-Residence at Harvard Business School and an Executive-In-Residence for Harvard University’s Innovation-Lab. How to join the network Information technology evolves through disruption waves.

How biased is your news source? You probably won’t agree with this chart Are we even aware of our biases anymore? If you look at this chart and are convinced your “extreme” source belongs in the middle, you just might be part of the problem plaguing America today. “In the past, national evening news programs, local evening news programs, and the front pages of print newspapers were dominated by fact-reporting stories,” says the chart’s creator, patent attorney Vanessa Otero. “Now, however, many sources people consider to be ‘news sources’ are actually dominated by analysis and opinion pieces.” She released the first version of the chart back in 2016, and she’s updated it several times since.

Truth, truthiness, triangulation: A news literacy toolkit for a “post-truth” world We were guaranteed a free press, We were not guaranteed a neutral or a true press. We can celebrate the journalistic freedom to publish without interference from the state. We can also celebrate our freedom to share multiple stories through multiple lenses.