Who should AI kill in a driverless car crash? It depends who you ask. Moral responses to unavoidable damage vary greatly around the world in a way that poses a big challenge for companies planning to build driverless cars, according to new research. 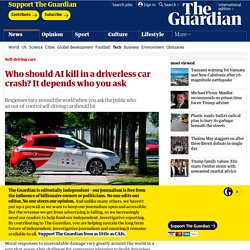 The researchers, from Massachusetts Institute of Technology and other institutions, presented variations of the classic “trolley problem” thought experiment almost 40m times to millions of volunteers from all around the world. In the traditional thought experiment, participants are asked to consider whether they would reroute a runaway trolley car which is about to hit and kill five people, directing it on to a siding where it would kill only one person.

In the new quiz, dubbed “Moral Machine”, the researchers instead asked volunteers to consider what a self-driving car should do in examples from more than 26 million variations of the same question. Driverless Cars and the Trolley Problem. The “Trolley Problem” is a long pondered ethical thought experiment; it is an intellectual exercise devised to highlight the moral conflicts that can arise in the making of decisions involving inescapable loss of life. 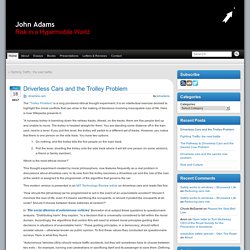 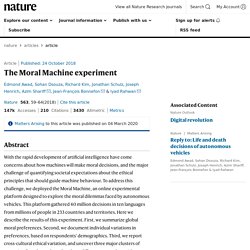 Moral Tribes: Emotion, Reason and the Gap Between Us and Them (Atlantic Books, London, 2013).2.Tomasello, M. A Natural History of Human Thinking (Harvard Univ. Press, Cambridge, 2014).3.Cushman, F. & Young, L. Faith for Earth – An ethical approach to global challenges. This urban farm rehabilitates people - Sustainable Food Trust - Sustainable Food Trust. Farming in the city is no longer a paradox to most urbanites. 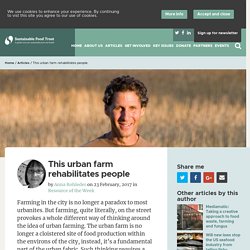 But farming, quite literally, on the street provokes a whole different way of thinking around the idea of urban farming. The urban farm is no longer a cloistered site of food production within the environs of the city, instead, it’s a fundamental part of the urban fabric. Such thinking requires a different set of ideas, maybe even a new vocabulary. Sole Food Street Farms is generating some of those new words. Here's Why You Should Turn Your Business Vegan In 2018. No longer relegated to the fringes of society where for so long it was mocked for being ‘weird’ or ‘extreme’, veganism is going mainstream. 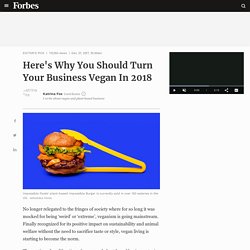 Finally recognized for its positive impact on sustainability and animal welfare without the need to sacrifice taste or style, vegan living is starting to become the norm. 'Going vegan' is predicted to be the biggest food trend of 2018. Veganism: How a maligned movement went mainstream. The unstoppable rise of veganism: how a fringe movement went mainstream. Diners guide to ethical eating - Sustainable Food Trust - Sustainable Food Trust.

How can we be sure that restaurant workers are being paid a fair wage? 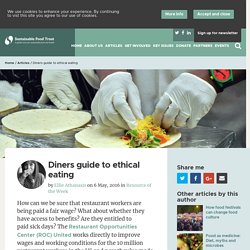 What about whether they have access to benefits? Are they entitled to paid sick days? The Restaurant Opportunities Center (ROC) United works directly to improve wages and working conditions for the 10 million restaurant workers in the US and now they’ve made it easier for diners to support the restaurants who are taking the “high road” and encourage those who aren’t to make a change. The challenges faced by restaurant workers are staggering. Class, Status and Environment: How Social Perception Influences the Sustainability Movement - Eco Warrior Princess. 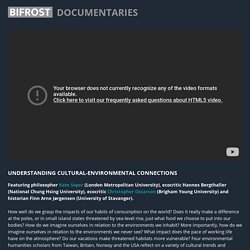 12 The Environment. The eco guide to big ethics. At a recent event held by the outdoor clothing brand Patagonia I detected a sheepish air. 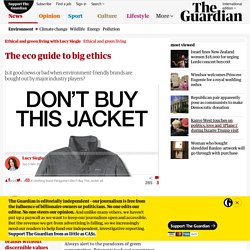 All topics from climate change to conservation. We use cookies to improve our service for you. 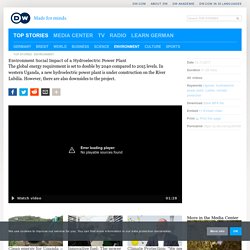 You can find more information in our data protection declaration. More infoOK Deutsche Welle Advertisement TOP STORIES / Environment Environment Social Impact of a Hydroelectric Power Plant The global energy requirement is set to double by 2040 compared to 2015 levels. Energy democracy and social movements: A multi-coalition perspective on the politics of sustainability transitions. Results are presented in two parts. 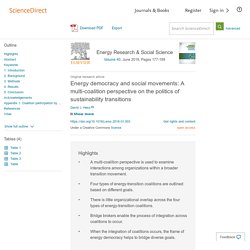 The second part of the results section summarizes the results for the first three research questions and provides an analysis in response to the fourth question. 4.1. Description: the four cases. Extending Environmental Ethics through Fear. Laura Cegarra, College '20Individuals must often work toward conclusions and actions in daily life, and to do this they frequently rely on ethical stances to guide their reasoning.

When working purely through ethics, people prioritize the objective, rational thought process over subjective feeling and emotion. Because ethics points toward an end without implying means, two individuals can have drastically divergent ethical views, yet still end at comparable outcomes. This divide is clear within the environmental movement. Bron Taylor, an American professor in environmental studies, discusses how ethical stance influences environmentalists’ viewpoints on why protection of the environment is worthwhile.