List of people who have lived at airports. From Wikipedia, the free encyclopedia This is a list of people notable for living for periods of more than a week in airports. 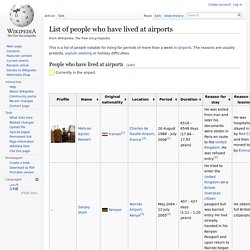 The reasons are usually protests, asylum seeking or holiday difficulties. §People who have lived at airports[edit] Currently in the airport. Timeline of the far future. List of human positions - Wikipedia. "Posing" redirects here. 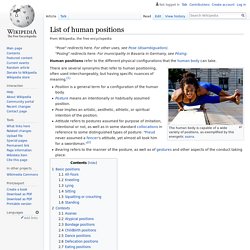 For municipality in Bavaria in Germany, see Pösing. Human positions refer to the different physical configurations that the human body can take. Chartjunk. An example of a chart containing gratuitous chartjunk. 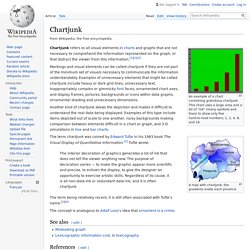 This chart uses a large area and a lot of "ink" (many symbols and lines) to show only five hard-to-read numbers, 1, 2, 4, 8, and 16. Chartjunk refers to all visual elements in charts and graphs that are not necessary to comprehend the information represented on the graph, or that distract the viewer from this information.[1][2][3] Markings and visual elements can be called chartjunk if they are not part of the minimum set of visuals necessary to communicate the information understandably. Examples of unnecessary elements that might be called chartjunk include heavy or dark grid lines, unnecessary text, inappropriately complex or gimmicky font faces, ornamented chart axes, and display frames, pictures, backgrounds or icons within data graphs, ornamental shading and unnecessary dimensions. Kessler syndrome. 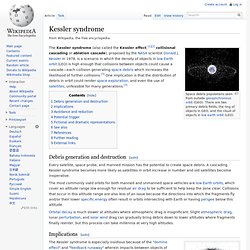 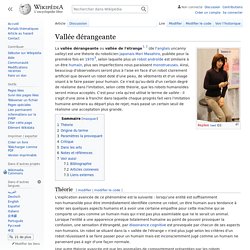 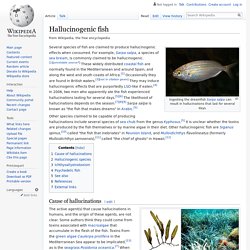 Sarpa salpa, a species of sea bream, is commonly claimed to be hallucinogenic.[1] These widely distributed coastal fish are normally found in the Mediterranean and around Spain, and along the west and south coasts of Africa.[2] Occasionally they are found in British waters.[3] They can induce LSD-like hallucinations if eaten.[4] In 2006, two men who apparently ate the fish experienced hallucinations lasting for several days.[5][6] The likelihood of hallucinations depends on the season.[7][8][9] Sarpa salpa is known as "the fish that makes dreams" in Arabic.[5] Other species commonly claimed to be capable of producing hallucinations include several species of sea chub from the genus Kyphosus.[5] It is unclear whether the toxins are produced by the fish themselves or by marine algae in their diet. Hapax. Un article de Wikipédia, l'encyclopédie libre. 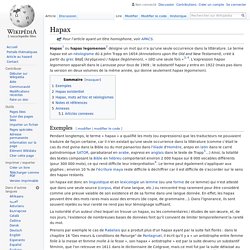 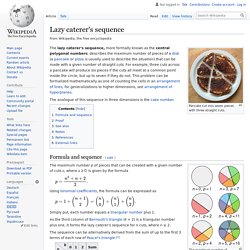 The lazy caterer's sequence, more formally known as the central polygonal numbers, describes the maximum number of pieces of a circle (a pancake or pizza is usually used to describe the situation) that can be made with a given number of straight cuts. For example, three cuts across a pancake will produce six pieces if the cuts all meet at a common point inside the circle, but up to seven if they do not. This problem can be formalized mathematically as one of counting the cells in an arrangement of lines; for generalizations to higher dimensions, see arrangement of hyperplanes. The analogue of this sequence in 3 dimensions is the cake number. Folie à deux - Wikipedia. Folie à deux (/fɒˈli ə ˈduː/; French pronunciation: ​[fɔli a dø]; French for "madness of two"), or shared psychosis, is a psychiatric syndrome in which symptoms of a delusional belief and hallucinations[1][2] are transmitted from one individual to another.[3] The same syndrome shared by more than two people may be called folie à trois, folie à quatre, folie en famille or even folie à plusieurs ("madness of many"). 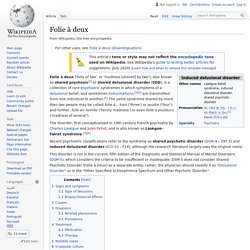 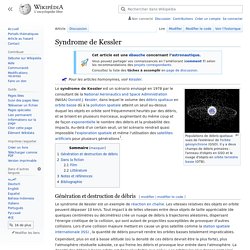 McCollough originally reported that these aftereffects may last for an hour or more.[1] They can last much longer than that, however: Jones and Holding (1975) found that 15 minutes of induction can lead to an effect lasting 3.5 months.[2] Wu experiment - Wikipedia. The Wu experiment performed at the Bureau of Standards low temperature laboratory, Washington DC, in 1956. The vertical vacuum chamber, containing the cobalt-60, detectors, and field coil, is being placed into a Dewar before being inserted into the large electromagnet in the background, which will cool the radioisotope near absolute zero by adiabatic demagnetization.

Chien-Shiung Wu, after whom the Wu experiment is named, designed the experiment and led the team that carried out the test of the conservation of parity. The experiment established that conservation of parity was violated (P-violation) by the weak interaction. List of effects - Wikipedia. From Wikipedia, the free encyclopedia. Terra nullius - Wikipedia. Terra nullius (/ˈtɛrə.nʌˈlaɪəs/, plural terrae nullius) is a Latin expression deriving from Roman law meaning "nobody's land",[1] which is used in international law to describe territory which has never been subject to the sovereignty of any state, or over which any prior sovereign has expressly or implicitly relinquished sovereignty. Sovereignty over territory which is terra nullius may be acquired through occupation,[2] (see reception statute) though in some cases doing so would violate an international law or treaty.

Australia[edit] Indigenous Australians had inhabited Australia for over 50,000 years before European settlement, which commenced in 1788. Indigenous customs, rituals and laws were unwritten and their social and political organization was unknown or understood by Europeans as being analogous to their own institutions, and the British could not find recognised leaders with whom they could sign treaties. List of places referred to as the Center of the Universe - Wikipedia. Several places on Earth have been given the nickname "Center (or Centre) of the Universe. " In addition, several fictional works have described a depicted location as being at the center of the universe. Modern models of the Universe suggest it does not have a center, unlike previous systems which placed the Earth (Geocentrism) or the Sun (Heliocentrism) at the center of the universe.

Nicknames of actual places[edit] North America[edit] Toxoplasmose. Un article de Wikipédia, l'encyclopédie libre. Half-life of knowledge - Wikipedia. Superseded scientific theories - Wikipedia. A superseded, or obsolete, scientific theory is a scientific theory that was once widely accepted within the mainstream scientific community but is no longer considered to be an adequate or complete description of reality, or is considered to be simply false. This label does not cover protoscientific or fringe science theories with limited support in the scientific community. Also, it does not mean theories that were never widely accepted. Some theories that were only supported under specific political authorities, such as Lysenkoism, may also be described as obsolete or superseded.

Chronologie de révolutions et de rébellions. Un article de Wikipédia, l'encyclopédie libre. Le Soulèvement, peinture d'Honoré Daumier La France connaît de nombreuses révoltes populaires, parfois des révolutions et des crises de régime, au cours du XIXe siècle. Anywhere on Earth - Wikipedia. Anywhere on Earth (AoE) is a calendar designation which indicates that a period expires when the date passes everywhere on Earth. The last place on Earth where any date exists is on Howland Island, in the IDLW time zone (the "Hawaii side" of the International Date Line), and so is the last spot on the globe for any day to exist. Therefore, the day ends AoE when it ends on Howland Island.