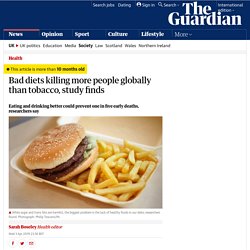 But the biggest problem is not the junk we eat but the nutritious food we don’t eat, say researchers, calling for a global shift in policy to promote vegetables, fruit, nuts and legumes. While sugar and trans-fats are harmful, more deaths are caused by the absence of healthy foods in our diet, the study found. Heart attacks and strokes are the main diet-related causes of death, followed by cancers and type 2 diabetes, say researchers.

The study found that eating and drinking better could prevent one in five deaths around the world. Although diets vary from one country to another, eating too few fruits and vegetables and too much sodium (salt) accounted for half of all deaths and two-thirds of the years of disability attributable to diet. 2018 Global Hunger Index Results - Global, Regional, and National Trends - Global Hunger Index - Official Website of the Peer-Reviewed Publication. Note: Rankings cannot be accurately compared with rankings and index scores from previous reports.Countries that have identical 2018 scores are given the same ranking (for example, Bulgaria and the Slovak Republic are both ranked 16th). 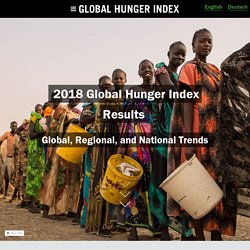 The following countries could not be included because of lack of data: Bahrain, Bhutan, Burundi, the Democratic Republic of the Congo, Equatorial Guinea, Eritrea, Libya, Moldova, Qatar, Somalia, South Sudan, the Syrian Arab Republic, and Tajikistan. The unstoppable rise of veganism: how a fringe movement went mainstream. Maduro dines on pricey 'Salt Bae' steaks as Venezuelans starve. Videos posted to Twitter and Instagram by the Turkish celebrity chef Nusret Gökçe, known as Salt Bae for his signature style of seasoning steaks, show Maduro dining with his wife, Cilia Flores, as Gökçe dramatically slices meat at their table while gyrating his hips. 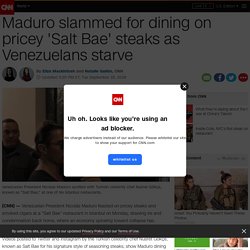 Another clip captures Maduro puffing on a cigar as the couple receives T-shirts screen-printed with Gökçe's likeness sprinkling salt. "This is a once-in-a-lifetime moment," Maduro can be heard saying to fellow diners. The videos have since been removed. Let's end the myths of Britain's imperial past. In his speech to the Conservative party conference this month, David Cameron looked back with Tory nostalgia to the days of empire: "Britannia didn't rule the waves with armbands on," he pointed out, suggesting that the shadow of health and safety did not hover over Britain's imperial operations when the British were building "a great nation". 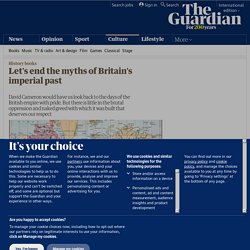 He urged the nation to revive the spirit that had once allowed Britain to find a new role after the empire's collapse. Tony Blair had a similar vision. "I value and honour our history enormously," he said in a speech in 1997, but he thought that Britain's empire should be the cause of "neither apology nor hand-wringing"; it should be used to further the country's global influence. World's Worst Famine: UN says 20M people could starve to death. Global Food Shortages ahead as Honey bee's die... World Hunger Haunts the U.N. Festivities. As the leaders of the world posture and sermonize for the United Nations General Assembly this week, a growing global specter should spur common concern among them: World hunger, after a decade-long decline, spiked last year, because of scourges like global warming and civil conflicts that show little sign of abating. 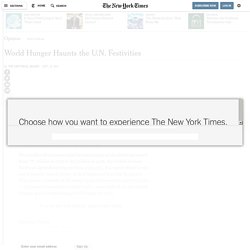 World Hunger Is Increasing, Thanks to Wars and Climate Change. The following essay is reprinted with permission from The Conversation, an online publication covering the latest research. 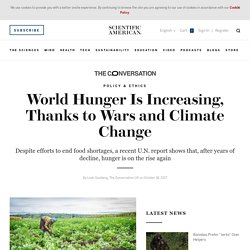 Around the globe, about 815 million people – 11 percent of the world’s population – went hungry in 2016, according to the latest data from the United Nations. This was the first increase in more than 15 years. Between 1990 and 2015, due largely to a set of sweeping initiatives by the global community, the proportion of undernourished people in the world was cut in half. In 2015, U.N. member countries adopted the Sustainable Development Goals, which doubled down on this success by setting out to end hunger entirely by 2030. But a recent U.N. report shows that, after years of decline, hunger is on the rise again. 'Alarm bells we cannot ignore': world hunger rising for first time this century. The number of hungry people in the world has increased for the first time since the turn of the century, sparking concern that conflict and climate change could be reversing years of progress. 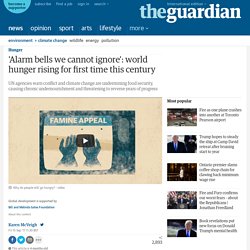 In 2016, the number of chronically undernourished people reached 815 million, up 38 million from the previous year. The increase is due largely to the proliferation of violence and climate-related shocks, according to the state of food insecurity and nutrition in 2017, a report produced by five UN agencies. The study also noted a rise in the number of people globally who are chronically hungry, from 10.6% in 2015 to 11% in 2016. Cindy Holleman, a senior economist at the Food and Agriculture Organisation, said it was hard to know whether the increase was a blip or marked the reversal of a long-term trend. “Whether it has been a blip and it’s going to go back down again, we’re not sure,” said Holleman. 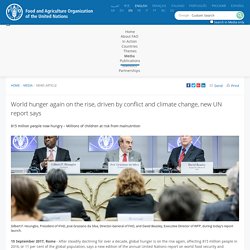 Houngbo, President of IFAD, José Graziano da Silva, Director-General of FAO, and David Beasley, Executive Director of WFP, during today's report launch. 15 September 2017, Rome - After steadily declining for over a decade, global hunger is on the rise again, affecting 815 million people in 2016, or 11 per cent of the global population, says a new edition of the annual United Nations report on world food security and nutrition released today. At the same time, multiple forms of malnutrition are threatening the health of millions worldwide. The increase - 38 million more people than the previous year - is largely due to the proliferation of violent conflicts and climate-related shocks, according to The State of Food Security and Nutrition in the World 2017. Some 155 million children aged under five are stunted (too short for their age), the report says, while 52 million suffer from wasting, meaning their weight is too low for their height. Key numbers Hunger and food security.

On World Hunger Day, a look at why so many people don&apos;t get enough food. The United Nations has set a goal of eradicating hunger and malnutrition by 2030. 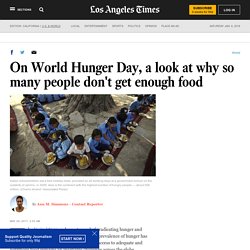 Although the prevalence of hunger has declined in recent years, the lack of access to adequate and nutritious food remains an insatiable challenge across the globe. As World Hunger Day is observed on Sunday, here’s a look at what’s behind the continuing prevalence of hunger around the world. 1 in 9 people go to bed hungry each night That’s 795 million people on the planet who suffer from chronic hunger, according to the United Nations World Food Program The U.N. forecasts that an additional 2 billion people will be lacking food by 2050. In addition, 1 in 3 people suffer from some form of malnutrition, which means they lack sufficient vitamins and minerals in their diet, which can lead to health issues such as stunted growth in children.

Hunger is not merely due to a lack of food. Younger Consumers Are Trending Toward More Health-Conscious Eating. Younger Americans Embrace Healthier Eating Options Does being younger than 30 translate to a predilection for healthier eating habits? 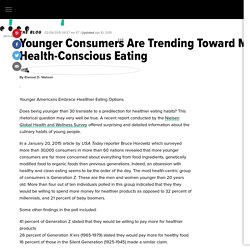 This rhetorical question may very well be true. A recent report conducted by the Nielsen Global Health and Wellness Survey offered surprising and detailed information about the culinary habits of young people. In a January 20, 2015 article by USA Today reporter Bruce Horowitz which surveyed more than 30,000 consumers in more than 60 nations revealed that more younger consumers are far more concerned about everything from food ingredients, genetically modified food to organic foods than previous generations.

Vegan Diet: Why Does it Make People So Angry? Vegans are a group of people who, by definition, are vegetarians that eat only plant products and don’t use anything derived from animals, such as leather. So what is it about this movement that draws such ire from people? Freegans: The bin scavengers. Under the cover of night, I stealthily lift the lid of the dustbin and shine in my torch. It's below zero and my hands are shaking as I rummage inside. I'm on the hunt for food. But I'm not homeless and I could certainly afford to go to the shops if I wanted to.

So, why am I doing this? Quite simply, I'm living as a freegan. Freegan food: Would you dumpster dive for your weekly meals? Posted Reusing and recycling has become a national pastime, but how many people would go as far as eating food dumped in a bin? For the past three years Ali has been doing her food "shopping" via her local supermarket bin. She describes herself as a freegan.

"Basically, if food is going to be wasted you take it and you eat it," she told ABC Radio Adelaide's Jules Schiller. It has been estimated that Australian households throw out more than $8 billion worth of food each year. "There is an unbelievable amount of waste and almost all of it is edible food," Ali said. She said by consuming food that would otherwise go to landfill, she was saving money — and helping the environment.

Avoid restaurant bins. Freegan freshers: the students making savings by living off waste. It’s midnight, I have a torch and I’m sifting through the bins behind my local Tesco in search of food. The idea of picking through discarded packets of cakes and cheese in a pair of marigolds may seem pretty disgusting. But for a small section of society, standing in bins at night – or freeganism, as it is more widely known – has become a way of life. Freegans avoid buying anything as much as possible in order to boycott the economic system and be eco-friendly. For many young freegans, this can mean asking supermarkets for their discarded food, which is often left in bins. “It’s not unusual to find around £100 worth of food on any given night,” says Finn Weddle, who was a freegan while at university in Edinburgh. But it’s not just about going through bins. Venezuela’s hunger crisis is for real.

Hunger eats away at Venezuela’s soul as its people struggle to survive. ‘They put bows on them’: Venezuelan plan to encourage rabbit-eating amid food shortages goes awry as people adopt them as pets.