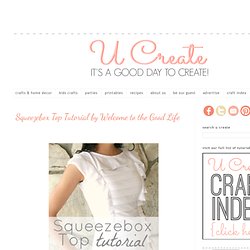 Call me a big nerd but my heart's pounding because i'm so excited and honored to be here!!! My name is Sarah and i keep a blog over at Welcome to the gOOd life. it's a diary written by me (and sometimes by my hilarious husband) of the good and the ugly as a wife, a stay at home mom, raising two kids under three-just a year apart, and also my weekly DIY sewing projects. so should we get on to my DIY project? Inspiration: squeezebox top from anthropologie picture from an anthropologie review blog.

Shabby flower pillow (a tutorial) Sometimes, ideas in my head don’t always turn out as planned. 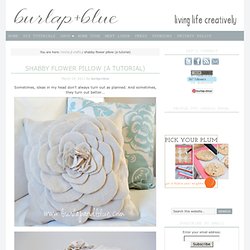 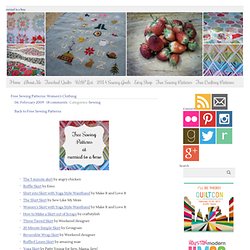 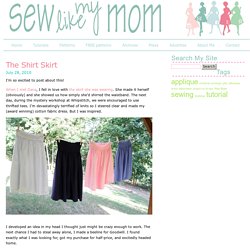 When I met Dana, I fell in love with the skirt she was wearing. She made it herself (obviously) and she showed us how simply she’d shirred the waistband. The next day, during the mystery workshop at Whipstitch, we were encouraged to use thrifted tees. I’m devastatingly terrified of knits so I steered clear and made my (award winning) cotton fabric dress. I developed an idea in my head I thought just might be crazy enough to work. Elm street life: DIY: Bow clutch sewing tutorial.

And fiiiinally... the tutorial you've been waiting for. 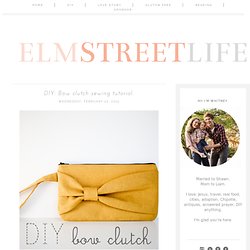 How To Duct Tape Dress. A duct tape dress is not only a quirky way to show up for the prom, it's also a chance at a college scholarship. 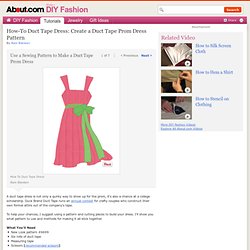 Duck Brand Duct Tape runs an annual contest for crafty couples who construct their own formal attire out of the company's tape. To help your chances, I suggest using a pattern and cutting pieces to build your dress. I'll show you what pattern to use and methods for making it all stick together. What You'll NeedNew Look pattern #6699 Six rolls of duct tape Measuring tape Scissors [recommended scissors] Once you have gathered your materials, let's get started. Step Five. Sew a bag with the free bag pattern. About Boning. Corset Tutorial. by ~PestilentialCreature. How to sew a Victorian skirt « learningtofly – Katafalk.

A old tutorial I had on livejournal, I hope you like it :) So I thought that I would share my how to for this quite easy sewn skirt in taffeta that I made for a friend of mine, it is a two layer skirt with strings so that you can tie up and drape the panels as you wish. 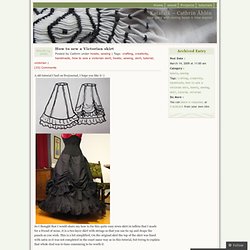 This is a bit simplified, On the original skirt the top of the skirt was lined with satin so it was not completed in the exact same way as in this tutorial, but trying to explain that whole deal was to time consuming to be worth it. Material you will need:Fabric: Of your choice, around 2 times the length of your skirtA zipper: I use a hidden zipper because I think it looks better, but a ordinary one is just as good.String: The length of your drapes and a little more *2*6 (you chose one can both have it the whole way up on the skirt or just half, or something similar) I use cotton string 0,5 cm (0,2 inches) thick. The pattern is a really easy one, it consist of 12 panels and then a long rectangle that is the ruffles. Lolita Skirt Tutorial Part 1 by ~RhodyGunn. Lolita Skirt Tutorial. Ruffle Skirt. Darkmuse112 - Super Cute Lolita Skirt Tutorial for Noobs.

10:59 pm - Super Cute Lolita Skirt Tutorial for Noobs This is what you will be making! 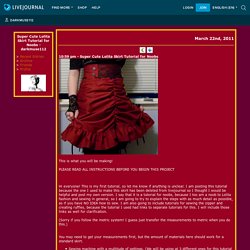 Hi everyone! This is my first tutorial, so let me know if anything is unclear. ♥ fearless - TUTORIAL: How to make a circle skirt. Burlesque Bustle Skirt. This is the pattern I created to make my bustle skirt. 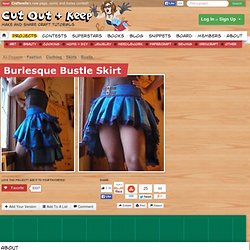 You can use it as is, or change it up a little. These instructions are super detailed, I'm basically walking you through what I learned along the way, so skip ahead if you're comfortable with some of these steps. Decide where you want the waistband to sit - at your waist or hips, and measure that circumference + add a little bit for seams. Basic Skirt Tutorial by ~Reine-Haru. Full Skirt Tutorial by ~Kapalaka. Tutorial: Circle Skirts by `taeliac. Easy Pleated Skirt Tutorial by *vintage-aerith on deviantART.