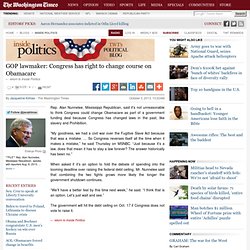 Alan Nunnelee, Mississippi Republican, said it’s not unreasonable to think Congress could change Obamacare as part of a government funding deal because Congress has changed laws in the past, like slavery and Prohibition. “My goodness, we had a civil war over the Fugitive Slave Act because that was a mistake. … So Congress reverses itself all the time when it makes a mistake,” he said Thursday on MSNBC. George Will Compares Obamacare To Fugitive Slave Act.

Bluffdale Prism Factory. Want A File From The NSA? You Can Ask, But You Might Not Get It. Hide captionProtesters march on Oct. 26 to demand that the Congress investigate the National Security Agency's mass surveillance programs. 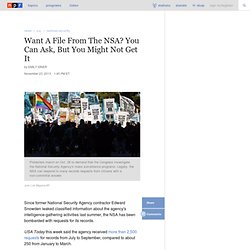 NSA gathered thousands of Americans’ e-mails before court ordered it to revise its tactics. In a strongly worded opinion, the chief judge of the Foreign Intelligence Surveillance Court expressed consternation at what he saw as a pattern of misleading statements by the government and hinted that the NSA possibly violated a criminal law against spying on Americans. 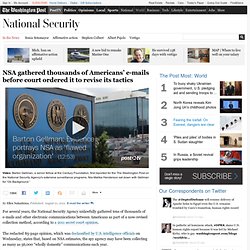 “For the first time, the government has now advised the court that the volume and nature of the information it has been collecting is fundamentally different from what the court had been led to believe,” John D. Bates, then the surveillance court’s chief judge, wrote in his Oct. 3, 2011, opinion. Obama "Will Not" Appoint DNI Clapper to Head NSA Transparency Board. Under pressure from the public and media, it appears that President Obama has decided not to appoint Director of National Intelligence James Clapper (shown) to head an “independent” group tasked with reviewing practices at the National Security Agency (NSA). 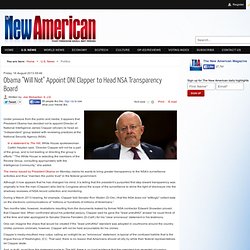 In a statement to The Hill, White House spokeswoman Caitlin Hayden said, “Director Clapper will not be a part of the group, and is not leading or directing the group’s efforts.” “The White House is selecting the members of the Review Group, consulting appropriately with the Intelligence Community,” she added. The memo issued by President Obama on Monday claims he wants to bring greater transparency to the NSA’s surveillance activities and thus “maintain the public trust” in the federal government. During a March 2013 hearing, for example, Clapper told Senator Ron Wyden (D-Ore.) that the NSA does not “wittingly” collect data on the electronic communications of “millions or hundreds of millions of Americans.” “No, I don’t think Mr. US owes Snowden 'debt of gratitude': Assange. Sydney, Aug 11, 2013 - Americans owe US intelligence leaker Edward Snowden a debt of gratitude because he prompted President Barack Obama to promise an overhaul of secret surveillance, WikiLeaks founder Julian Assange said. 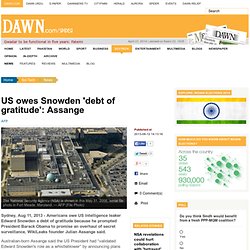 Australian-born Assange said the US President had “validated Edward Snowden's role as a whistleblower” by announcing plans which promised greater oversight and transparency. “Today was a victory of sorts for Edward Snowden and his many supporters,”Assange said Saturday in comments published on his Australian website. “As Snowden has stated, his biggest concern was if he blew the whistle and change did not occur.” “Well reforms are taking shape, and for that, the President and people of the United States and around the world owe Edward Snowden a debt of gratitude.” Obama's Response To NSA Was To Appease The Public, Not Reduce The Spying. 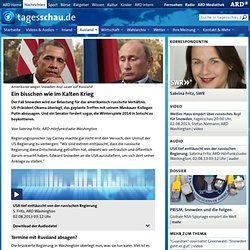 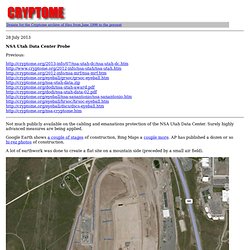 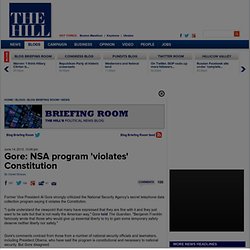 "I quite understand the viewpoint that many have expressed that they are fine with it and they just want to be safe but that is not really the American way," Gore told The Guardian. "Benjamin Franklin famously wrote that those who would give up essential liberty to try to gain some temporary safety deserve neither liberty nor safety. " Gore's comments contrast from those from a number of national security officials and lawmakers, including President Obama, who have said the program is constitutional and necessary to national security. But Gore disagreed. "This in my view violates the Constitution. "This is not right," Gore added.

DoD: If You See A Leaked NSA Document, Press SHIFT And DELETE To Get Rid Of It. We saw this back when Wikileaks released a bunch of documents and the Defense Department and other government agencies told employees that they weren't allowed to look at any of the documents, even though they were being splashed all over the press. 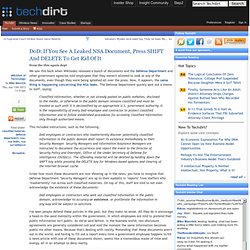 Now, it appears, the same thing is happening concerning the NSA leaks. The Defense Department quickly sent out a memo to staff, saying: Classified information, whether or not already posted on public websites, disclosed to the media, or otherwise in the public domain remains classified and must be treated as such until it is declassified by an appropriate U.S. government authority. It is the responsibility of every DoD employee and contractor to protect classified information and to follow established procedures for accessing classified information only through authorized means. This included instructions, such as the following: The NSA's word games explained: How DNI James Clapper thinks he can lie to Congress and get away with it. : trevortimm. What The State Fears Most: Revelations Of Truth About The State. By Robert Higgs Why does the U.S. government go to such extraordinary lengths to discredit, punish, and ruin persons such as Daniel Ellsberg, Julian Assange, and—next in line, no doubt—Edward Snowden? 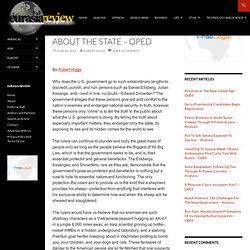 PRISM.GOV Spyware Launching. Remember When Supreme Court Rejected Review Of FISA Amendments Act, Because It Was 'Too Speculative' That Plaintiffs Were Being Monitored? It really was just a few months ago that the Supreme Court rejected a lawsuit filed by the ACLU, seeking to find the FISA Amendments Act unconstitutional. This is part of the law that is so key to the NSA's surveillance strategy, part of which was revealed over the past few days. Is The Bigger Concern NSA Getting Phone Records, PRISM Or Just Everything? Edward Snowden: saving us from the United Stasi of America. Link to video: NSA whistleblower Edward Snowden: 'I don't want to live in a society that does these sort of things' In my estimation, there has not been in American history a more important leak than Edward Snowden's release of NSA material – and that definitely includes the Pentagon Papers 40 years ago.

Snowden's whistleblowing gives us the possibility to roll back a key part of what has amounted to an "executive coup" against the US constitution. Since 9/11, there has been, at first secretly but increasingly openly, a revocation of the bill of rights for which this country fought over 200 years ago.

In particular, the fourth and fifth amendments of the US constitution, which safeguard citizens from unwarranted intrusion by the government into their private lives, have been virtually suspended. U.S., British intelligence mining data from nine U.S. Internet companies in broad secret program. The National Security Agency and the FBI are tapping directly into the central servers of nine leading U.S. Internet companies, extracting audio and video chats, photographs, e-mails, documents, and connection logs that enable analysts to track foreign targets, according to a top-secret document obtained by The Washington Post.

The program, code-named PRISM, has not been made public until now. It may be the first of its kind. The NSA prides itself on stealing secrets and breaking codes, and it is accustomed to corporate partnerships that help it divert data traffic or sidestep barriers. But there has never been a Google or Facebook before, and it is unlikely that there are richer troves of valuable intelligence than the ones in Silicon Valley.

NSA Can Access Much of Americans’ Digital Lives. Why the Government Wants Your Metadata. A man types on a computer keyboard in this Feb. 28, 2013 illustration file picture. More Details On PRISM Revealed; Twitter Deserves Kudos For Refusing To Give In.