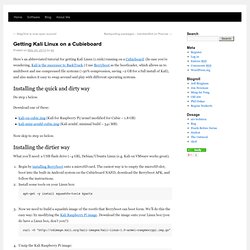 (In case you’re wondering, Kali is the successor to BackTrack.) I use Berryboot as the bootloader, which allows us to multiboot and use compressed file systems (>50% compression, saving ~2 GB for a full install of Kali), and also makes it easy to swap around and play with different operating systems. Installing the quick and dirty way Do step 1 below. Download one of these: Cubieboard 2. Arm/Cubieboard - FreeBSD Wiki. Cubieboard is a developer board that is based on the Allwinner A10/A20 System-On-Chip (SoC). 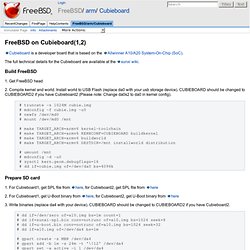 The full technical details for the Cubieboard are available at the sunxi wiki. Build FreeBSD 1. Get FreeBSD head 2. Download. Cubieboard. Cubieboard is a small (10x6cm), hacker friendly, extendable and very low-cost while powerful ARM board with Allwinner A10 SoC. 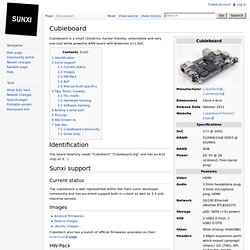 The board helpfully reads "Cubietech" "Cubieboard.org" and has an A10 chip on it. :) Current status The cubieboard is well represented within the main sunxi developer community and has excellent support both in u-boot as well as 3.4 and mainline kernels. Images. ArmHardFloatPort. This page gathers thoughts and ideas around a new hard-float ABI ARM port for Debian, hopefully to be released for the the first time with Wheezy (7.0). 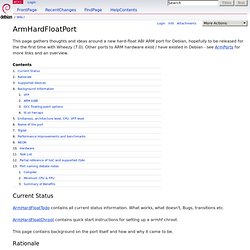 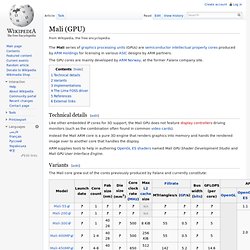 The GPU cores are mainly developed by ARM Norway, at the former Falanx company site. Like other embedded IP cores for 3D support, the Mali GPU does not feature display controllers driving monitors (such as the combination often found in common video cards). Instead the Mali ARM core is a pure 3D engine that renders graphics into memory and hands the rendered image over to another core that handles the display. 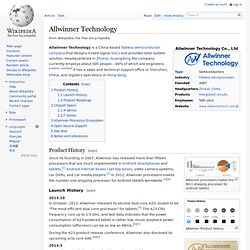 Headquartered in Zhuhai, Guangdong the company currently employs about 500 people – 80% of which are engineers. [citation needed] It has a sales and technical support office in Shenzhen, China, and logistics operations in Hong Kong. Product History[edit] Allwinner processors makes the NO.1 shipping processor for android tablets Launch History[edit] Allwinner Product History 2013.10 In October, 2013, Allwinner released its second dual-core A23, touted to be "The most efficient dual core processor" for tablets.[5] The A23 CPU frequency runs up to 1.5 GHz, and test data indicates that the power consumption of A23-powered tablet is rather low, music playback power consumption (offscreen) can be as low as 48mA;[6][7] ARM Cortex-A7 MPCore. The ARM Cortex-A7 MPCore is a processor core designed by ARM Holdings implementing the ARM v7 instruction set architecture. 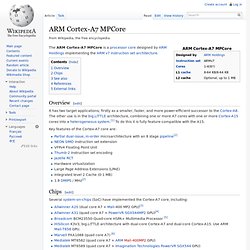 Overview[edit] It has two target applications; firstly as a smaller, faster, and more power-efficient successor to the Cortex-A8. The other use is in the big.LITTLE architecture, combining one or more A7 cores with one or more Cortex-A15 cores into a heterogeneous system.[1] To do this it is fully feature-compatible with the A15. Key features of the Cortex-A7 core are: Cubieboard/Installing on NAND. Automatically, with Install-Cubian Update, cubieplayer has made a Linux image for cubieboard1 called Cubian. which supports automatic NAND installation for Cubieboard1 and Cubieboard2. 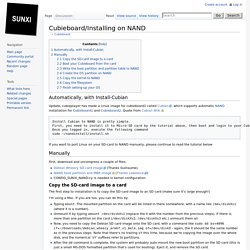 Quote from Cubian Wiki Install Cubian to NAND is pretty simple. First, you need to install it to Micro-SD card by the tutorial above, then boot and login to your Cubieboard. Once you logged in, execute the following command sudo ~/nandinstall/install.sh If you want to port Linux on your SD-card to NAND manually, please continue to read the tutorial below Manually First, download and uncompress a couple of files: Copy the SD-card image to a card The first step to installation is to copy the SD-card image to an SD card (make sure it's large enough!) I'm using a Mac. Typing mount. On Linux, the steps will be quite similar. Boot your Cubieboard from the card. Cubieboard/FirstSteps. Note: This is the FirstSteps for Cubieboard users. 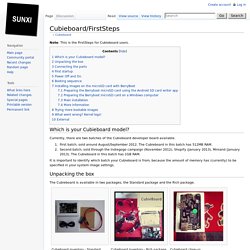 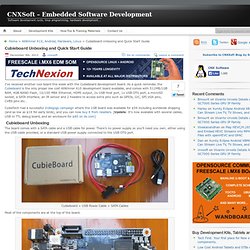 As a quick reminder, the Cubieboard is the only proper low cost AllWinner A10 development board available, and comes with 512MB/1GB RAM, 4GB NAND Flash, 10/100 MBit Ethernet, HDMI output, 2x USB Host port, 1x USB OTG port, a microSD socket, a SATA interface, an IR sensor and 2 headers to access extra pins such as GPIOs, I2C, SPI,VGA pins, CVBS pins etc… CubieTech had a successful Indiegogo campaign where the 1GB board was available for $59 including worldwide shipping (and as low as $19 for early birds), and you can now buy it from resellers. [Update: It's now available with several cables, USB to TTL debug board, and an enclosure for $80 on dx.com]

Well ment, but .... overall it sounded too good to be true and that's what it proved too be.a) Grief begins with the first startup that doesn't work as expected if one uses a monitor (it's aimed at developers, isn't it) instead of a TV. Generally a good idea to have Android as default OS which everyone (rookie to pro) is familiar with.

But please make it WORK. $49 Feature-Packed Cubieboard. Arduino vs. Raspberry Pi vs. CubieBoard vs. Gooseberry vs. APC Rock vs. OLinuXino vs. Hackberry A10. A long time ago, Earth was ruled by dinosaurs. Then they died and we began to play with Motorola HC11. These were prehistoric times, when debugging involved an oscilloscope. BB-BBLK-000 - CIRCUITCO - BEAGLEBONE BLACK, CORTEX A8, DEV. Mixtrónica Online - Comercialização de material eléctronico - Mixtrónica, Lda.