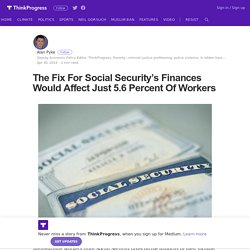 Thanks to new research from the Center for Economic and Policy Research (CEPR), we now know just who would be affected by the elimination of that exemption: less than 6 percent of all workers. Current tax laws exempt every dollar a person earns above $117,000 from payroll taxes to finance Social Security. That cap means that the 900 richest people in the country stopped paying into the program after the first two days of 2014. Those most able to chip into the country’s retirement security system won’t do so again until the calendar flips to 2015. As CEPR notes, the cap means that “workers who make $117,000 or less per year pay a higher Social Security payroll tax rate than those who make more.” Trump’s Social Security heresy: Taking on Paul Ryan & the privatization push. One of the most fascinating things about Donald Trump as a presidential candidate is how he effortlessly and effectively rips holes in the Republican policy agenda despite a) not really having a policy agenda of his own, and b) not really knowing what he’s talking about at any given time. 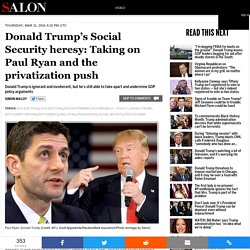 There are a wealth of examples of this phenomenon, with healthcare standing out as one of the most prominent. At a recent debate, Trump got cornered by Ted Cruz for not really understanding how the healthcare system works, and Trump insisted that under his plan insurance will be private but the government “will not allow people to die on the sidewalks and the streets of our country.” That’s when Cruz, a hardcore conservative who rejects the idea of government involvement in healthcare, jumped in and demanded to know who would be paying to prevent the sick and indigent from dying on the roads. Well, Paul, who I like a lot, he called me last week, I think he’s a really nice guy.

GOP unveils a permanent save for Social Security —massive benefit cuts. Amid all the hand-wringing over Republican plans to eviscerate Medicare and Medicaid and repeal the Affordable Care Act, it shouldn’t be overlooked that the GOP has the knives out for Social Security too. 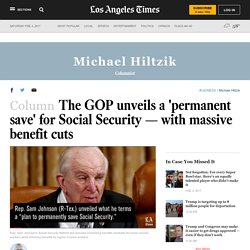 The latest reminder comes from Rep. Sam Johnson, R-Tex., chairman of the Ways and Means Social Security subcommittee. Johnson on Thursday uncorked what he termed a “plan to permanently save Social Security.” Followers of GOP habits won’t be surprised to learn that it achieves this goal entirely through benefit cuts, without a dime of new revenues such as higher payroll taxes on the wealthy. In fact, Johnson’s plan reduces the resources coming into the program by eliminating a key tax --another way that he absolves richer Americans of paying their fair share, while increasing the burdens of retirement for almost everyone else. The group calls Johnson’s proposal “a thoughtful plan” and the product of “true leadership.” Republicans launch plan to annihilate Social Security. By the time Donald Trump is sworn in as president, tens of thousands of Americans will already have stopped paying into Social Security for the entire year. 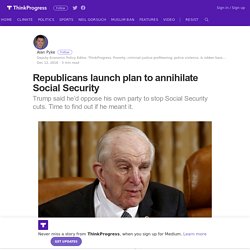 Those lucky few earn at least $2.1 million a year — a level roughly 100,000 tax filers reached in 2014, according to the IRS. They owe their yearlong retirement tax holiday to a rule capping the amount of annual income that is subject to payroll taxes. With wealth inequality’s explosion over the last four decades, a huge portion of the money generated by workers’ sweat is now escaping the retirement system. A higher cap — or eliminating the cap entirely — would make Social Security fiscally secure until nearly the end of this century and ensure that the system can provide the same modest, vital support to retirees’ dignity that it does today. Republicans would rather destroy the program entirely. “It definitely doesn’t hold anyone harmless. This isn’t reform. “Once you earn it, it’s yours.