What Happened? - kieranhealy.org. I don’t know what happened. 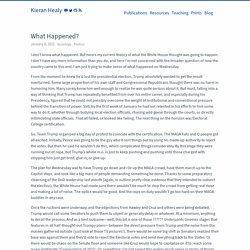 But here’s my current theory of what the White House thought was going to happen. I don’t have any more information than you do, and here I’m not concerned with the broader question of how the country came to this end. I am just trying to make sense of what happened on Wednesday. From the moment he knew he’d lost the presidential election, Trump absolutely wanted to get the result overturned. Some large proportion of his own staff and Congressional Republicans thought there was no harm in humoring him. So, Team Trump organized a big day of protest to coincide with the certification. The plan for Wednesday was to have Trump go down and rile up the MAGA crowd, have them march up to the Capitol steps, and look like a big mass of people demanding something be done. Once the ructions were underway, and the objections from Hawley and Cruz and others were being debated, Trump would call some Senators to push them to object or generally delay or whatever.

What Parler Saw During the Attack on the Capitol. Berkeley author George Lakoff says, 'Don't underestimate Trump' — Berkeleyside. George Lakoff, retired UC Berkeley professor and author of Don’t Think of an Elephant, is one of a very few people in Berkeley who does not underestimate Donald Trump. 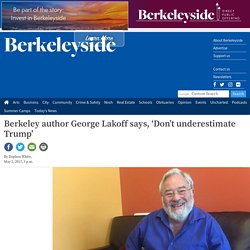 “Trump is not stupid,” he tells anyone who will listen. “He is a super salesman, and he knows how to change your brain and use it to his advantage.” In fact, Lakoff predicted a year ago that Trump would win with 47% of the vote. (The actual total was 46%.) Lakoff even told Hillary Clinton’s campaign and PAC staffers how to counteract Trump’s message.

As far back as 2006, Lakoff saw the writing on the wall. Lakoff’s message is simple, but it is couched in the language of cognitive linguistics and neuroscience. But a worldview is exactly what Lakoff is talking about. This theory explains why even college-educated Trump voters could ignore so many facts about their candidate. Our thoughts are chemical in nature, and occur within the confines of a physical body: we are not 100 percent rational beings. Untold Truths About the American Revolution. There are things that happen in the world that are bad, and you want to do something about them. 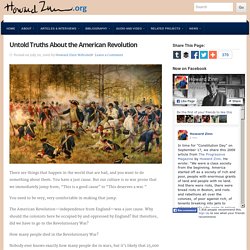 You have a just cause. But our culture is so war prone that we immediately jump from, “This is a good cause” to “This deserves a war.” You need to be very, very comfortable in making that jump. The American Revolution—independence from England—was a just cause. Why should the colonists here be occupied by and oppressed by England? How many people died in the Revolutionary War? Nobody ever knows exactly how many people die in wars, but it’s likely that 25,000 to 50,000 people died in this one.

You might consider that worth it, or you might not. Canada is independent of England, isn’t it? In the year before those famous shots were fired, farmers in Western Massachusetts had driven the British government out without firing a single shot. Who actually gained from that victory over England? Why do people believe myths about the Confederacy? Because our textbooks and monuments are wrong. The Confederate flag waves over the South Carolina statehouse. 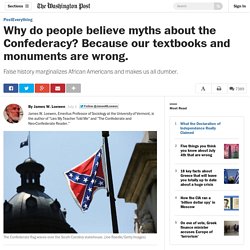 (Joe Raedle/Getty Images) History is the polemics of the victor, William F. Buckley once said. Not so in the United States, at least not regarding the Civil War. As soon as the Confederates laid down their arms, some picked up their pens and began to distort what they had done and why. The Confederates won with the pen (and the noose) what they could not win on the battlefield: the cause of white supremacy and the dominant understanding of what the war was all about. Take Kentucky, where the legislature voted not to secede. Neo-Confederates also won parts of Maryland. In fact, the thin gray line came through Montgomery and adjoining Frederick counties at least three times, en route to Antietam, Gettysburg and Washington. South Carolina Gov. Neo-Confederates didn’t just win the battle of public monuments. [Why people convince themselves that the Confederate flag represents freedom, not slavery]