Female Sex Offenders — Going Soft. It's generally the case that when an adult male gets sexually involved with a child, especially a female child, he is immediately charged with a crime, jailed and if convicted, labeled a sex offender. 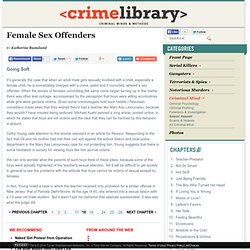 When the stories of females committing the same crime began turning up in the media, there was often less outrage, accompanied by the perception that boys were willing accomplices while girls were genuine victims. (Even some criminologists hold such beliefs.) Television comedians made jokes that they wished they'd had a teacher like Mary Kay Letourneau, because they wouldn't have minded being seduced. Michael Kuehl penned a long article, posted online, in which he states that boys are not victims and the idea that they can be harmed by this behavior is absurd. Cathy Young calls attention to this double standard in an article for Reason. In fact, Young noted a case in which the teacher received only probation for a similar offense in New Jersey: that of Pamela Diehl-Moore. Addictive Love. The basis for a healthy relationship with another must start with a healthy relationship with yourself. 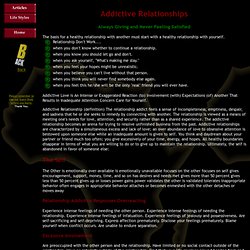 Addictive Love is An Intense or Exaggerated Reaction (to) Involvement (with) Expectations (of) Another That Results in Inadequate Attention Concern Care for Yourself. Addictive Relationship (definition) The relationship addict feels a sense of incompleteness, emptiness, despair, and sadness that he or she seeks to remedy by connecting with another.

The relationship is viewed as a means of meeting one's needs for love, attention, and security rather than as a shared experience. The addictive relationship becomes an arena for trying to resolve unfinished business from the past. Addictive relationships are characterized by a simultaneous excess and lack of love; an over abundance of love to obsessive attention is bestowed upon someone else while an inadequate amount is given to self. The Self Relationship Addictive Responses Overreacting Excessive Involvement Unrealistic Expectations. The 6 Biggest Badasses Who Lived As The Opposite Sex. Throughout history, men and women have disguised themselves as the opposite sex, some of them really really well, in a way that confuses and possibly arouses us. 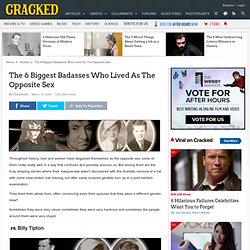 But among them are the truly amazing stories where their masquerade wasn't discovered with the dramatic removal of a hat with some slow motion hair tossing, but after some surprise genitals turn up in a post-mortem examination. They lived their whole lives, often convincing even their spouses that they were a different gender. How? Sometimes they were very clever, sometimes they were very hardcore and sometimes the people around them were very stupid. Billy Tipton was a jazz musician from the 30s through the 60s, and like most jazz musicians of that era, a partier and a womanizer. See? Born as Dorothy Tipton, she got into jazz in high school but was forbidden from joining the school band because girls weren't allowed. Penis Club membership kit. 6 Famous Geniuses You Didn't Know Were Perverts.

Since it seems like every movie star, athlete and politician is just a sex scandal waiting to happen, you could almost think that it's not possible to be a prominent person without also having an utterly depraved sex life behind the scenes. 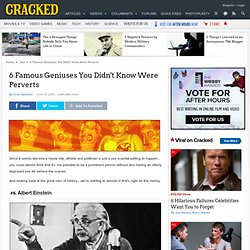 And looking back at the great men of history... we're starting to wonder if that's right on the money. Albert Einstein, Time magazine's man of the century, is simply the most famous scientist in the history of the planet. He was the first to postulate the theory of relativity, he convinced FDR to build the atomic bomb, he was offered the chance to be the first president of Israel and is considered the father of modern physics. 5 Incredibly Impractical Sexual Fetishes. Everyone's got their kink. 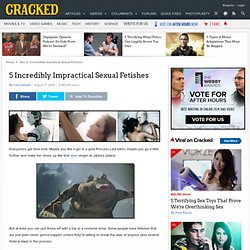 Maybe you like a girl in a gold Princess Leia bikini, maybe you go a little further and make her dress up like that alien singer at Jabba's palace. But at least you can pull those off with a trip to a costume shop. Some people have fetishes that are just plain never gonna happen unless they're willing to break the laws of physics (and several federal laws) in the process. Vorarephilia, a.k.a. Getting Cooked and Eaten The thing about having a fetish for cooking and eating humans, or being the victim of such, is that's the sort of thing you can probably only do once in real life before they put a stop to it.

If you have a hard time wrapping your head around this fetish, think of it this way: Remember those Warner Bros. cartoons in which Bugs Bunny and Daffy would find themselves on a desert island? Now imagine that scene but with Bugs and Daffy sporting raging erections. Representative Website: Typical Comment: But Why? Typical Cannibal Fetishist's Come On Line: